Air Canada to start charging for emotional baggage in 2017 - Funny Stuff. DORVAL, QC—Air Canada announced this morning that as of 2017, passengers will be required to pay an extra fee to transport any emotional baggage they happen to be carrying with them onto their flight. 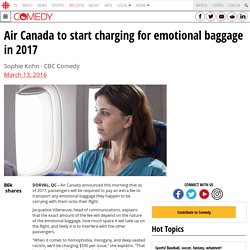 Jacqueline Villeneuve, head of communications, explains that the exact amount of the fee will depend on the nature of the emotional baggage, how much space it will take up on the flight, and likely it is to interfere with the other passengers. "When it comes to homophobia, misogyny, and deep-seated racism, we'll be charging $500 per issue," she explains. "That kind of emotional baggage is quite heavy and nearly impossible to store safely. It takes tremendous effort on behalf of the cabin crew to make room for those kinds of issues. " In addition to the fee, Air Canada has put some restrictions place in order to adhere to safety standards. How Donald Trump Answers A Question. In a traumatised Netherlands, faith in the EU is plummeting.

Once a beacon of progressive politics, the Netherlands today is a traumatised, angry and deeply confused nation. 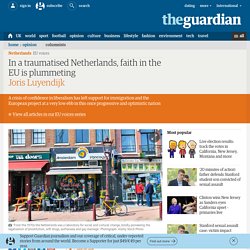 Support for immigration and the European project are at all-time lows. Synagogues and Jewish schools need police protection from homegrown jihadists, and freedom of expression is under serious pressure. Leading pundits and comedians incite hatred against Muslims in much the same way that antisemites rage against “the Jews”. It seems a long time since “Dutch” was synonymous with tolerance.

A founding member of the European Union, the Netherlands developed from the 1970s onwards into a laboratory for social and cultural change, boldly pioneering the legalisation of prostitution, soft drugs, euthanasia and gay marriage. Those were the days when Dutch politicians and opinion-makers would refer to the Netherlands, without any apparent irony, as a “gidsland”, or “guide country”: a small nation leading by example.

. • Tell us what the EU means to you and your country. How Social Media Affects Your Career Prospects — Interactive Schools. How many ten year olds are thinking about their future careers? 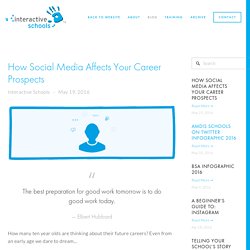 A child's future career prospects could be being damaged by their digital footprint. Sarcasm increases creativity and psychological well-being, say academics. I have sometimes been called a “sarky b*****d”, my own attempts at dry wit, edgy word play and irony dismissed as, well, mere sarcasm. 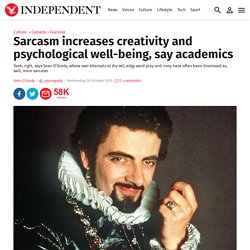 Indeed, I was once beaten up after offering someone a genuinely felt compliment, taken entirely the wrong way because of the arid manner of delivery. I didn't make that mistake again and have stuck to insults ever since. So Britain's wider sarky community – larger proportionately than in many other irony-free cultures such as America, Germany or North Korea, say – will be as gratified as I am that some academics (and when did they get anything wrong?)

How false information spreads. Last summer the World Economic Forum (WEF) invited its 1,500 council members to identify top trends facing the world, including what should be done about them. 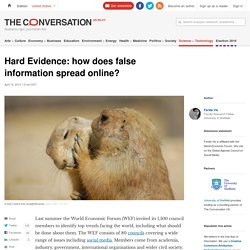 At a value of 3.35 this was seen as somewhat to very significant. False information and the news Within a number of professions, journalism being an obvious one, the spread and potential for reporting misinformation is a genuine concern. Are internet users concerned? The authors note: The Best Resources On Teaching & Learning Critical Thinking In The Classroom. Teaching and learning critical thinking in the classroom will be the topic of my next Education Week Teacher column (contribute your ideas there, please), so I wanted to develop a “The Best…” list with supporting materials. 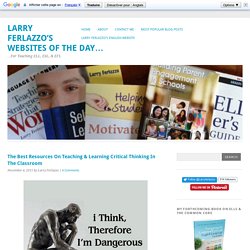 I put out a call on Twitter and Google Plus for people to make suggestions, but unfortunately didn’t do a great job of keeping track who made the suggestions. I apologize if I did not credit you for your suggestion. I’ll keep much better track the next time I put out a similar request. I hope readers will contribute additional suggestions. You might also be interested in: The Best Sites For Cooperative Learning Ideas The Best Resources For Helping Teachers Use Bloom’s Taxonomy In The Classroom The Best Sites For Students To Create & Participate In Online Debates The Best Tools To Help Develop Global Media Literacy Here are my picks, and the picks from my Personal Learning Network, for The Best Resources On Teaching & Learning Critical Thinking In The Classroom: Related.