Andrzej Zulawski. A Documentary Feel - a list by dgaicun. Every Best Picture Oscar Winner, Ranked From Worst to Best. This week marks the 10th anniversary of the release of "Crash" (on May 6, 2005), an all-star movie whose controversy came not from its provocative treatment of racial issues but from its Best Picture Oscar victory a few months later, against what many critics felt was a much more deserving movie, "Brokeback Mountain. 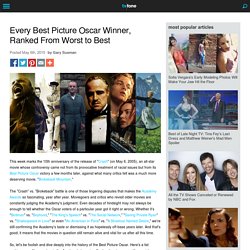 " The "Crash" vs. "Brokeback" battle is one of those lingering disputes that makes the Academy Awards so fascinating, year after year. Moviegoers and critics who revisit older movies are constantly judging the Academy's judgment. Even decades of hindsight may not always be enough to tell whether the Oscar voters of a particular year got it right or wrong. Whether it's "Birdman" vs. 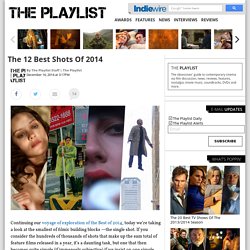 If you consider the hundreds of thousands of shots that make up the sum total of feature films released in a year, it’s a daunting task, but one that then becomes quite simple (if immensely subjective) if we insist on one simple parameter: it had to be a single shot, no cuts, that stayed with us long after we finished watching the film. However this year, for one reason that some of you have probably guessed, the debate about how we actually define “a shot” loomed large. Watch: 1001 Essential Films to See Before You Die. Let's address possibly the most serious problem affecting filmmakers and cinephiles today. 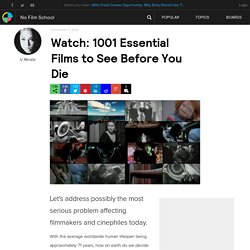 With the average worldwide human lifespan being approximately 71 years, how on earth do we decide which of the 317,596 feature film titles currently in existence to take up the precious 622,373 hours of our lives? Okay, I know. Technically, the math's all wrong. György Pálfi – Final Cut: Ladies and Gentlemen (2012) Quote: A film where anything can happen – the hero and the heroine changes their faces, age, look, names, and so on. 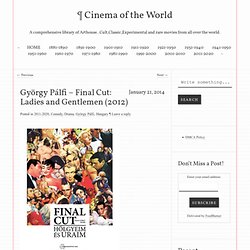 The only same thing: the LOVE between man and woman… in an archetypical love story cut from 500 classics from all around the world Reviews: Saw this tonight at the Sydney Cockatoo Island Film Festival. Blowing the Lid off of 'Chaos Cinema': How Action Films Have Changed. Who doesn’t like a good action flick, right? 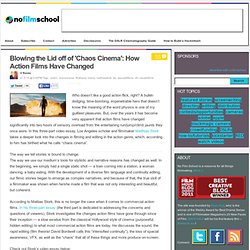 A bullet-dodging, time-bombing, impenetrable hero that doesn’t know the meaning of the word physics is one of my guiltiest pleasures. But, over the years it has become very apparent that action films have changed significantly into two hours of sensory overload from the entertaining run/jump/climb jaunts they once were. In this three-part video essay, Los Angeles scholar and filmmaker Matthias Stork takes a deeper look into the changes in filming and editing in the action genre, which, according to him has birthed what he calls “chaos cinema”. The way we tell stories is bound to change. Blowing the Lid off of 'Chaos Cinema': How Action Films Have Changed. Top 13 Sites For Independent Filmmakers.

In recent years, the content of the internet has transformed itself from a controlled and manufactured environment to a vast expanse of user generated content. 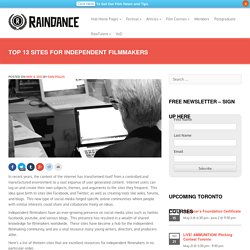 Internet users can log on and create their own subjects, themes, and arguments to the sites they frequent. This idea gave birth to sites like Facebook, and Twitter; as well as creating tools like wikis, forums, and blogs. This new type of social media forged specific online communities where people with similar interests could share and collaborate freely on ideas. Independent filmmakers have an ever-growing presence on social media sites such as twitter, facebook, youtube, and various blogs. This presence has resulted in a wealth of shared knowledge for filmmakers worldwide. Religion Will Save Us. Poder Sin Límites (Chronicle) (2012) - Subtitulado » Peliculas Online, Estrenos, Cine, Gratis. Watch The Best French Films & French Movies on SKY Movies 343. TheHydeTube. Giallo thriller slasher horror mystic movies.