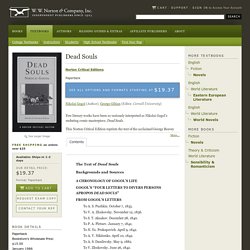 This Norton Critical Edition reprints the text of the acclaimed George Reavey translation, which has been fully annotated for undergraduate readers. "Backgrounds" contains not only Gogol’s correspondence relevant to the novel but also the four formal letters that set forth his views on the work. The editor has also included a useful chronology of Gogol’s life and an invaluable table of ranks in czarist Russia. A wide range of criticism includes Robert Maguire’s general overview of Gogol’s criticism; two nineteenth-century Russian appraisals; Donald Fanger’s brilliant essay; and a broad spectrum of twentieth-century Russian critical opinion. It features, as well, essays by Vladimir Nabokov and Edmund Wilson. The Russian essays have been translated specially for this Norton Critical Edition. 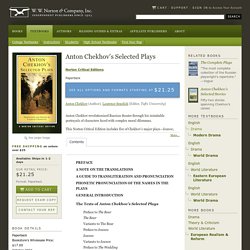 This Norton Critical Edition includes five of Chekhov’s major plays—Ivanov, The Seagull, Uncle Vanya, Three Sisters, and The Cherry Orchard—and three early one-act farces that inform his later work—The Bear, The Wedding, and The Celebration. Laurence Senelick’s masterful translations closely preserve Chekhov’s singular style—his abundant jokes and literary allusions and his careful use of phrase repetition to bind the plays together. "Letters" is the largest collection of Chekhov’s commentary on his plays ever to appear in an English-language edition. "Criticism" includes eleven essays by leading European and Russian Chekhov scholars, most appearing in English for the first time, including those by Boris Zingerman, Maria Deppermann, and Lev Shestor. 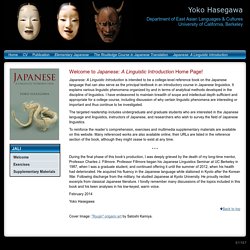 Japanese: A Linguistic Introduction is intended to be a college-level reference book on the Japanese language that can also serve as the principal textbook in an introductory course in Japanese linguistics. It explains various linguistic phenomena organized by and in terms of analytical methods developed in the discipline of linguistics.

I have endeavored to maintain breadth of scope and intellectual depth sufficient and appropriate for a college course, including discussion of why certain linguistic phenomena are interesting or important and thus continue to be investigated. The targeted readership includes undergraduate and graduate students who are interested in the Japanese language and linguistics, instructors of Japanese, and researchers who wish to survey the field of Japanese linguistics. To reinforce the reader’s comprehension, exercises and multimedia supplementary materials are available on this website. February 2014. The Cambridge Companion to the Body in Literature : David Hillman : 9781107644397. 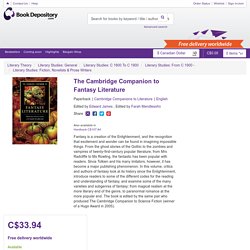 He won the University of California's Eaton Prize for his book Science Fiction in the Twentieth Century (1994) and a Hugo Award for (jointly) editing The Cambridge Companion to Science Fiction. He co-wrote, with Farah Mendlesohn, A Short History of Fantasy (2009) and he has co-edited a number of other books, all of them essay collections, with Farah Mendlesohn and others. One of these is the first and only academic book on Terry Pratchett, called Terry Pratchett: Guilty of Literature (first edition 2000, shortlisted for a Hugo Award in 2001). He is currently working on book-length studies of Gregory of Tours and Lois McMaster Bujold. Farah Mendlesohn is Reader in Science Fiction and Fantasy at Middlesex University. Show more. Japan Style Sheet: The SWET Guide for Writers, Editors, and Translators: Society of Writers Editors and Translators Tokyo: 9781880656303: Amazon.com: Books.

The Art of Language Invention: From Horse-Lords to Dark Elves, the Words Behind World-Building : David J. Peterson : 9780143126461. David Peterson's language work transformed our show, investing it with a sense of reality and history that would have been impossible without him. 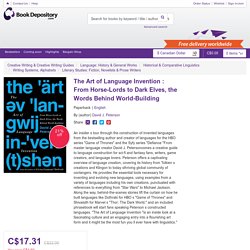 There's nothing like the real thing, and David Peterson is it. This fascinating book will not only illuminate the task of language creation--it will make you look at your own language in a whole new way. David Benioff and D.B. Weiss, co-creators of HBO's"Game of Thrones " George R. R. Show more. Two-Timing Modernity — J. Keith Vincent. “Offering incisive textual analyses of homosociality in the texts of three canonical writers (Mori Ogai, Natsume Soseki, and Mishima Yukio) and one relatively unknown writer (Hamao Shiro), Vincent examines the male homosocial continuum in Japanese fiction, exploring the way male–male relationships in the novels under discussion have been relegated to a historical and narrative past where they persist in the ‘amber of memory.’ 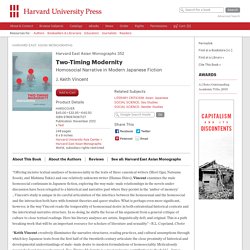 …Vincent’s study is unique in its careful articulation of the interface between the homosexual and the homosocial and the interaction both have with feminist theories and queer studies. What is perhaps even more significant, however, is the way Vincent reads the temporality of homosexual desire in both extratextual historical contexts and the intertextual narrative structure. In so doing, he shifts the focus of his argument from a general critique of culture to close textual readings.