5 Digital Photography Tips That Can Make A Difference. A long time ago in a land far far away there was no such thing as digital photography but only film photography. 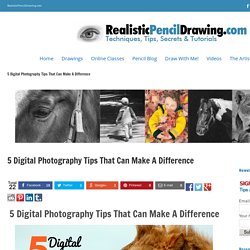 But would you believe the first digital camera came about in the late 1950s? Yes, it was actually during the Cold War that politicians on both sides realized we needed a camera attached to our satellites so we could spy on the enemy. Very clever, right? Well, the problem was who could develop the film while in space to send the photos back down to Earth without the satellites having to come back down? So you can see how digital photography came into play. The concept in having digital photography here on Earth began in 1973 with engineer Steve Sasson, who worked for Eastman Kodak, used a CCD to produce a digital image.

When I first began taking photography classes during my college days the ideas of 'digital photography' were never talked about. Would you believe I haven't printed out any pictures to put in an album since my son was 3 years old (he is 9 now). How Do You Handle Art Criticism? Guidelines & Tips. As artists, we have all been there sooner or later. 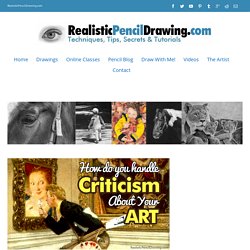 "How do you like my artwork? " you ask. What an awkward question to ask or to answer. I have asked this question and I have answered it too. I have been teaching adults and children how to draw for the past 15 years now and I know that when it comes to critiquing someone else's artwork, you need to be sensitive of another person's feelings. During my adult drawing classes I have heard horror stories from older adults who gave up on producing works of art in their younger years because they had been told by either a teacher, friend or family member that their art wasn't good enough. When we ask someone if they like our artwork, we want an honest opinion back, right? "It's OK....but maybe you should put THAT over THERE. " "This could be better. " "Are you going to hang that on your wall? " "You want to be an artist?

"What is THAT??? " "Don't waste your time with your artwork. "My kid can draw better than that! " My artwork has been criticized too. Draw With Me! - Learn to Draw - FREE Drawing Tutorials. Draw With Me Series – Learn to Draw Taylor Swift Would you like to practice how to draw people? 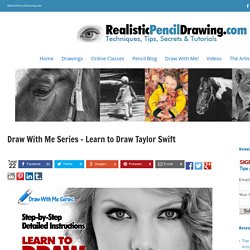 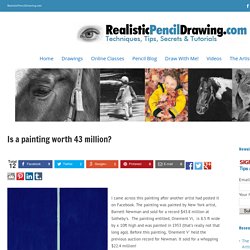 I came across this painting after another artist had posted it on Facebook. The painting was painted by New York artist, Barnett Newman and sold for a record $43.8 million at Sotheby's. The painting entitled, Onement Vi, is 8.5 ft wide by x 10ft high and was painted in 1953 (that's really not that long ago). Before this painting, 'Onement V' held the previous auction record for Newman. It sold for a whopping $22.4 million! Pencils No Longer Being Made in 2018. Being a pencil realist artist I never thought in a million years that pencils would some day be obsolete. 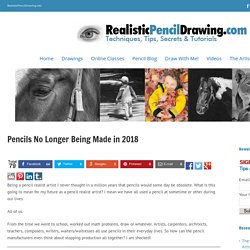 What is this going to mean for my future as a pencil realist artist? I mean we have all used a pencil at sometime or other during our lives. All of us. From the time we went to school, worked out math problems, draw or whatever. Artists, carpenters, architects, teachers, composers, writers, waiters/waitresses all use pencils in their everyday lives. NUREMBERG, GERMANY - With ever changing technology and the rise in popularity of electronic devices such as tablets and iPads, the resulting digital mayhem has caused the sale of pencils to plummet in recent years. "We have found a consistent drop in pencil sales due to the rise in digital devices like tablets and digital stylus pens. Globally, children will be taught to use tablets in the school system and for home use.

The Dangers Of Sitting Too Long. Listen Up Artists! I am an artist and website designer which has brought me to sitting much more than I would like to. 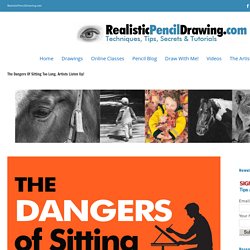 Over the years I have worked as a graphic designer, website designer, teacher and an artist. I have spent a large portion of my life sitting in a chair rather than moving my body as a nurse, construction worker or firefighter would do in their job. We sit when we watch tv, commuting to and from a location and when we eat out at a restaurant. Many artists that I know sit while painting, drawing, creating digital art, tattoos, fashion designers, pottery, making jewelry, scrapbooking, etc. They spend most of their day sitting. What Are The Dangers Of Sitting Too Long? To be honest, I never really thought about the dangers of sitting too long until recent years. Dr. What he means by this is that even if you worked out at the gym a few times a week for an hour is not going to counteract hours of chronic uninterrupted sitting.