Building Memory. Museums, Trauma, and the Aesthetics of Confrontation in Argentina Abstract The U.S. 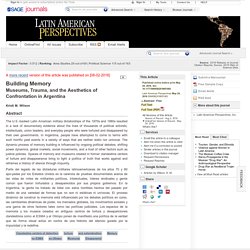 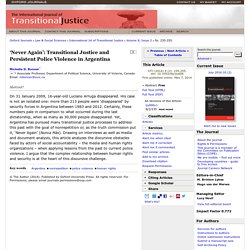 His case is not an isolated one: more than 213 people were ‘disappeared’ by security forces in Argentina between 1983 and 2012. Certainly, these numbers pale in comparison to what occurred during the last dictatorship, when as many as 30,000 people disappeared. Yet, Argentina has pursued many transitional justice processes to address this past with the goal of nonrepetition or, as the truth commission put it, ‘Never Again’ (Nunca Más).

Drawing on interviews as well as media and document analysis, this article analyzes the discursive obstacles faced by actors of social accountability – the media and human rights organizations – when applying lessons from the past to current police violence. An Error Occurred Setting Your User Cookie. The Holocaust Again?: Dispatches from the Jewish "Internal Front" in Dictatorship Argentina. Undoubtedly, the greatest density of Holocaust discourse in Latin America can be found in Argentina in response to the military dictatorship of 1976 to 1983, known by its official name, "Proceso de Reorganización Nacional" (National Reorganization Process). 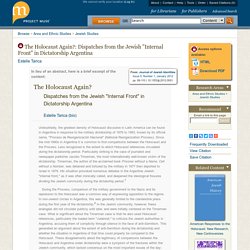 Since the mid-1990s in Argentina it is common to find comparisons between the Holocaust and the Proceso. Less recognized is the extent to which Holocaust references circulated during the dictatorship period. An Error Occurred Setting Your User Cookie. Guerrillas and Generals: The "Dirty War" in Argentina - Paul H. Lewis. In this comprehensive, balanced examination of Argentina's Dirty War, Lewis analyzes the causes, describes the ideologies that motivated both sides, and explores the consequences of all-or-nothing politics.

The military and guerrillas may seem marginal today, but Lewis questions whether the Dirty War is really over. Lewis traces the Dirty War's origins back to military interventions in the 1930s and 1940s, and the rise of General Juan Peron's populist regime, which resulted in the polarization of Argentine society. Peron's overthrow by the military in 1955 only heightened social conflict by producing a resistance movement out of which several guerrilla organizations would soon emerge.

The ideologies, terrorist tactics, and internal dynamics of those underground groups are examined in detail, as well as their links to other movements in Argentina and abroad. Disappearing Acts: Spectacles of Gender and Nationalism in Argentina's ... - Diana Taylor. Between the Voices of the State and the Human Rights Movement: <i>Never Again</i> and the Memories of the Disappeared in Argentina.