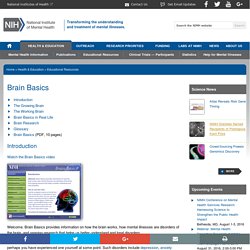 Brain Basics provides information on how the brain works, how mental illnesses are disorders of the brain, and ongoing research that helps us better understand and treat disorders. Mental disorders are common. You may have a friend, colleague, or relative with a mental disorder, or perhaps you have experienced one yourself at some point. Some people who develop a mental illness may recover completely; others may have repeated episodes of illness with relatively stable periods in between.

Through research, we know that mental disorders are brain disorders. Scientists are continually learning more about how the brain grows and works in healthy people, and how normal brain development and function can go awry, leading to mental illnesses. Neuroscience Module phase5. Programming the nation 2011 HD. Growing up in the digital age. Sanitas Radio - Brent Dean Robbins, PhD - Drugging Our Children - 1 of 2. Brent Dean Robbins, Ph.D. Existential Therapy. Alfred Adler: Theory and Application. 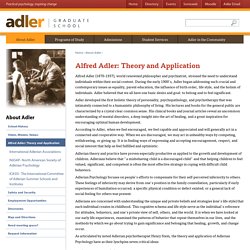 During the early 1900's, Adler began addressing such crucial and contemporary issues as equality, parent education, the influence of birth order, life style, and the holism of individuals. Adler believed that we all have one basic desire and goal: to belong and to feel significant. Adler developed the first holistic theory of personality, psychopathology, and psychotherapy that was intimately connected to a humanistic philosophy of living.

His lectures and books for the general public are characterized by a crystal clear common sense. His clinical books and journal articles reveal an uncommon understanding of mental disorders, a deep insight into the art of healing, and a great inspiration for encouraging optimal human development. Alfred Adler: Theory and Application. 6 Things Depression & Suicidal Thinking Can Make you Do. The addicted brain. What are Neurotransmitters? NEUROTRANSMITTERS are the brain chemicals that communicate information throughout our brain and body. 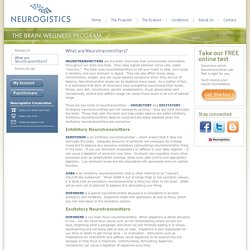 They relay signals between nerve cells, called “neurons.” The brain uses neurotransmitters to tell your heart to beat, your lungs to breathe, and your stomach to digest. They can also affect mood, sleep, concentration, weight, and can cause adverse symptoms when they are out of balance. Neurotransmitter levels can be depleted many ways. The Bowen Center – Eight Concepts. Eight Conceptsadmin2016-03-21T13:38:37+00:00 How to Cite the Online Version of One Family’s Story Kerr, Michael E. 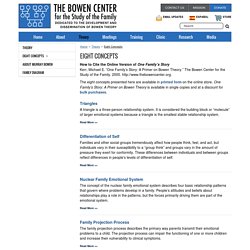 “One Family’s Story: A Primer on Bowen Theory.” The Bowen Center for the Study of the Family. 2000. The eight concepts presented here are available in printed form on the online store. Triangles A triangle is a three-person relationship system. Differentiation of Self. The Genogram - GenoPro. A genogram (pronounced: jen-uh-gram) is a graphic representation of a family tree that displays detailed data on relationships among individuals. 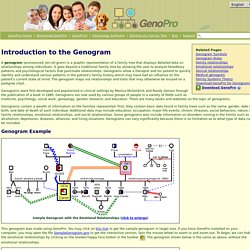 It goes beyond a traditional family tree by allowing the user to analyze hereditary patterns and psychological factors that punctuate relationships. Genograms allow a therapist and his patient to quickly identify and understand various patterns in the patient's family history which may have had an influence on the patient's current state of mind. The genogram maps out relationships and traits that may otherwise be missed on a pedigree chart. Family Systems Theory - GenoPro.

The family systems theory is a theory introduced by Dr. 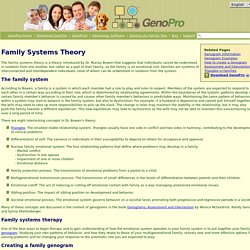 Murray Bowen that suggests that individuals cannot be understood in isolation from one another, but rather as a part of their family, as the family is an emotional unit. Families are systems of interconnected and interdependent individuals, none of whom can be understood in isolation from the system. The family system. Choice Theory - William Glasser Institute. The mission of The William Glasser Institute is to teach all people Choice Theory® and to use it as the basis for training in: Reality Therapy, 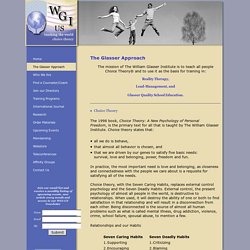 Dissolving Anxiety. Watch The Brain with David Eagleman Online. A personalized PBS video experience is only a few clicks away. 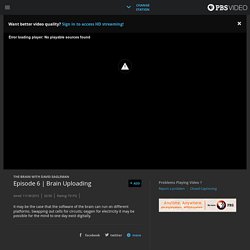 Use one of the services below to sign-in to PBS, and you'll be able to manage videos in your Watchlist, keep track of your favorite shows, watch PBS in high definition, and much more! You've just tried to add this video to your Watchlist so you can watch it later. But first, we need you to sign-in to PBS using one of the services below. THE BRAIN - PBS series and book. For the past 2 years I've been writing and filming this 6 hour television series and the companion book. 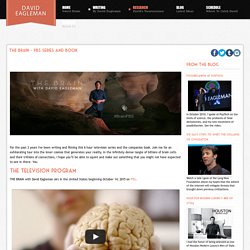 Join me for an exhilarating tour into the inner cosmos that generates your reality. Prepare Your Brain for Change. How to Focus A Wandering Mind, by Wendy Hasenkamp. New research reveals what happens in a wandering mind—and sheds light on the cognitive and emotional benefits of increased focus. 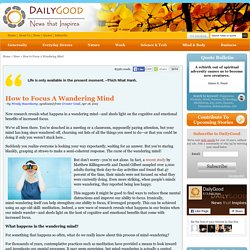 We’ve all been there. You’re slouched in a meeting or a classroom, supposedly paying attention, but your mind has long since wandered off, churning out lists of all the things you need to do—or that you could be doing if only you weren’t stuck here… Suddenly you realize everyone is looking your way expectantly, waiting for an answer. Dr. Dan Siegel - Explains Mirror Neurons in Depth. BRAIN POWER: From Neurons to Networks. How the brain works. The Open Focus theory (four attention styles) Focusing on Open Focus: Part 1 What is Open Focus?