A Guide to the History of Dallas, Texas: Timeline 1920s. 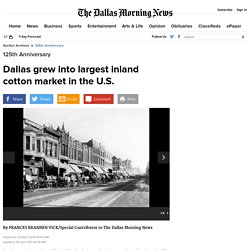 Smith asked town saloonkeeper Adam Haught to build a flatboat named the Dallas, which was powered by poles and oars. Smith placed 22 bales of cotton on it and, with Haught in command, began a 40-mile journey to Porter's Bluff near Corsicana. The river trek took four months, but ended when they encountered water so low they could go no farther. The cotton was loaded onto ox wagons headed for Houston, where it was moved by barge or boat to Galveston. This was the first cotton delivered from Dallas to commercial channels. Railroad's role. City of Dallas, City Secretary's Office. 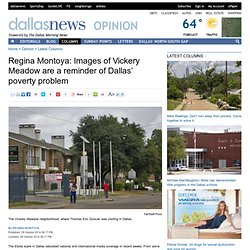 From some quarters, the reaction was concern that incessant, panic-driven news coverage would damage our city’s image. A Cavalcade of Texas: An historic visit to Texas in 1938. Devalued no more: Recalling Dallas' Little Mexico and Little Jerusalem. Johnny Rincon witnesses the final crushing of Little Mexico on a daily basis. 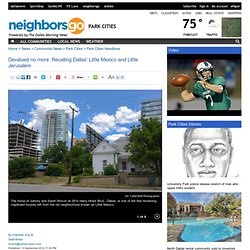 He hears the jackhammers and saws. He sees the construction cranes above his neighborhood. The Runyonesque Pearl Street Market, Full of Colorful Characters and an Army of Rats. Produce seller, Pearl Street Market (click for larger image) by Paula Bosse Last week I wrote about the produce market area in the neighborhood where the Farmers Market was eventually built, mainly because I had come across the above undated and unidentified photograph. 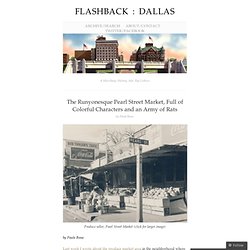 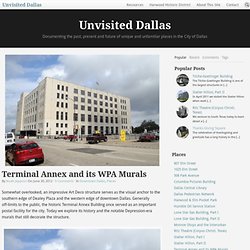 Generally off-limits to the public, the historic Terminal Annex Building once served as an important postal facility for the city. Today we explore its history and the notable Depression-era murals that still decorate the structure. Fall-Catalog-Official.pdf. Automobile Blue Book Map of Dallas, 1920. Back to Main Page. 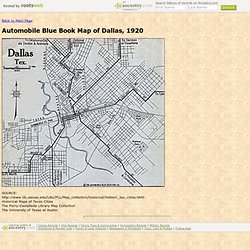 Old_map-Dallas-1892.jpg 9,000×6,354 pixels. » Archived LecturesDallas Institute of Humanities and Culture. Dallas Historical Streetcar Lines. A Miscellany: History, Ads, Pop Culture. Old Southern Slang. Houston Street Viaduct. Dallas Morning News Photography - News for Dallas, Texas. Daily Events, Dallas, Texas, 1919. The Times Herald today presents for its busy readers a brief resume of the most important happenings in Dallas during the past twelve months so that "one who runs may read" and at a glance tell what occurred in this city during the year 1919. 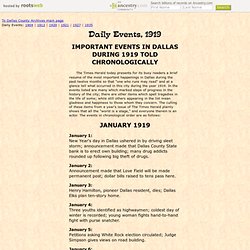 In the events listed are many which marked steps of progress in the history of the city; there are other items which spell tragedies in the life of some; while still others appearing in the list mean gladness and happiness to those whom they concern. The culling of these items from a year's issue of The Times Herald plainly shows that all the "world is a stage," and everyone therein is an actor. The events in chronological order are as follows: January 1: New Year's day in Dallas ushered in by driving sleet storm; announcement made that Dallas County State bank is to erect own building; many drug addicts rounded up following big theft of drugs. 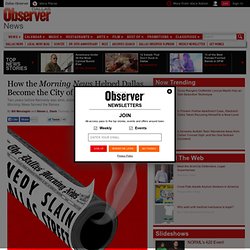 Davis carefully chronicle the story of Dallas in the years leading up to President John F. Kennedy's assassination in November 1963. In this excerpt, they take us back to October 1961, when The Dallas Morning News' combative publisher helped cement the city's reputation as a conservative hotbed. Ted Dealey considers the telegram that has just arrived at his office. It is addressed personally to him from President John F. "It would be useful to me to have an exchange of views with you on state, regional and national problems. 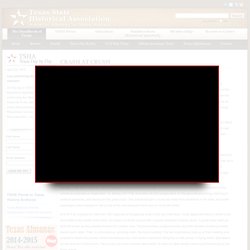 A plaque fifteen miles north of Waco in McLennan County marks the site of the "Crash at Crush. " On September 15, 1896, more than 40,000 people flocked to this spot to witness one of the most spectacular publicity stunts of the nineteenth century-a planned train wreck. The man behind this unusual event was William George Crush, passenger agent for the Missouri, Kansas and Texas Railroad.

In 1895 Crush proposed to Katy officials that the company stage a train wreck as an attraction; he planned to advertise the event months in advance, sell tickets to transport spectators to and from the site on Katy trains, and then run two old locomotives head-on into each other. The officials agreed. Throughout the summer of 1896 bulletins and circulars advertising the "Monster Crash" were distributed throughout Texas.

Crime. Myth. Dallas Back In The Day. Dallas Back In The Day If we have inadvertently put a photo in this website for which you hold a copyright, please let us know and we will remove the photo immediately. We have no intention of any copyright infringement. This is a non-profit historical website for the entertainment of our fellow classmates only. At the same time, some photos in this website belong to us or to our classmates, so please - if you're going to take any of these pictures and captions to put on your website, Facebook page or Flickr page, at least give this website credit. Thanks... (Use your 'zoom' option on your browser to take a closer look at any of these images.) (For dozens of additional nostalgic pics and memories of Dallas, check out the other articles and sections in this website.

Shameless Plug - this 224 page book is filled with memories...and over 200 photos and visuals.

Texas Sayings. Dallas Public Library - Texas/Dallas History & Archives Division - Contact. Plaza History / Dallas History. If you are coming to Dallas, you OWE YOURSELF a tour of the Assasination sites! 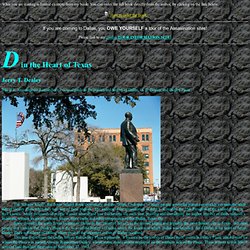 Please link to my Dallas TOUR INFORMATION SITE) D in the Heart of Texas Jerry T. Dealey. Osborn Main. At first sight, the small farm near Bastrop seemed insignificant. Based on what remained of the dilapidated structures, they hardly merited a second look. But as the site was investigated, it became clear that the story of this seemingly unimportant farm was worth telling. This exhibit looks at the farm as representative of a critical juncture in the state's economic history, as it was gradually transformed from a property worked by African-American slaves to a venture supported through tenant farming by Mexican-American families. Originally part of a league granted to empresario Stephen F.