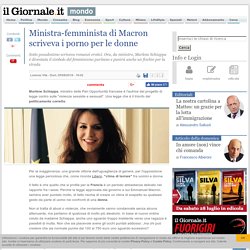 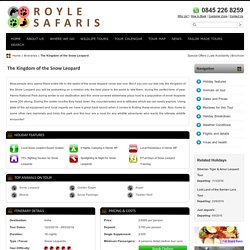 But if you join our trek into the Kingdom of the Snow Leopard you will be embarking on a mission into the best place in the world to see them, during the perfect time of year. Hemis National Park during winter is our destination and this snow covered wilderness plays host to a population of snow leopards some 200 strong. During the colder months they head down the mountainsides and to altitudes which we can easily explore. Using state of the art equipment and local experts we have a great track record when it comes to finding these elusive cats. Also home to some other rare mammals and birds this park and this tour are a must for any wildlife adventurer who wants the ultimate wildlife encounter! Walking & Trekking Holidays in India. Zicasso. Snow leopard tracking vacation in Ladakh. Travel like a local. In the cold winter months, we head out into the wild, surrounded by snow-capped mountains and stunning vistas for the rare opportunity to track the elusive snow leopards of Ladakh. 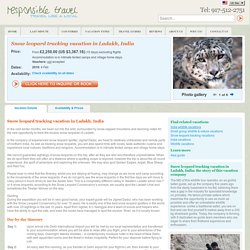 In the company of experienced snow leopard spotter, Jigmet Dadul, we head to relatively untravelled and remote parts of northern India. As well as tracking snow leopards, you will also spend time with locals, taste authentic cuisine and experience local cultures, traditions and religions. Accommodation is in intimate tented camps and village home stays. Snow Leopard ConservancySnow Leopard Conservancy. A Map of the Snow Leopard’s Range: Quick Facts: There may be 4,500 – 7,500 snow leopards left in the wildSnow Leopards are confirmed to live in 12 countries of Central Asia.Their range covers 1.2-1.6 million sq. km. (463,000-618,000 sq. mi.)A snow leopard’s home range can be as little as 12 sq.km. (4.6 sq.mi.) in productive habitat, to 500 or more sq.km. in the Gobi Desert of MongoliaUp to a third of the snow leopard’s range falls along international borders. 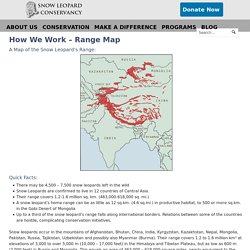 Relations between some of the countries are hostile, complicating conservation initiatives. Saving Snow Leopards — In search of Snow Leopards. Mammal-watching: mammals, birds and photography. 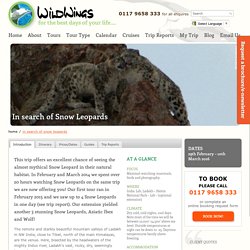 Snow Leopard Safari Holidays 2015 - Natural World Safaris. Your heart skips a beat as your guide points in the direction of one of the world’s most elusive big cats. 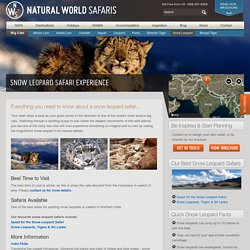 Watching through a spotting scope to see closer the elegant movements of this wild animal, you are one of the lucky few who will ever experience something so magical and so rare as seeing the magnificent snow leopard in its natural habitat. Best Time to Visit The best time of year is winter, as this is when the cats descend from the mountains in search of prey. Please contact us for more details. Safaris Available. Guided Ski And Splitboard Tours In Kyrgyzstan's Tien Shan Mountains. There are undoubtedly adventures you think you will never have. 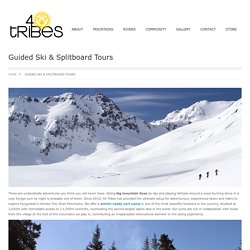 Skiing big mountain lines by day and playing Yahtzee around a wood burning stove in a cozy Kyrgyz yurt by night is probably one of them. Since 2010, 40 Tribes has provided the ultimate setup for adventurous, experienced skiers and riders to explore Kyrgyzstan’s remote Tien Shan Mountains. Tours & Treks. Kyrgyzstan Tours. Uzbek Journeys: Kyrgyz tours. Kyrgyzstan Art and Craft Tours 2016 Uzbek Journeys offers a special glimpse into this beautiful and little known country. 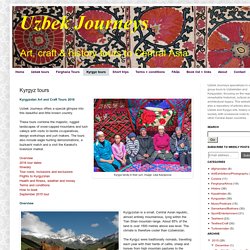 These tours combine the majestic, rugged landscapes of snow-capped mountains and lush valleys with visits to textile co-operatives, design workshops and yurt makers. The tours also include eagle hunting demonstrations, a buzkashi match and a visit the Karakol's livestock market. Overview2016 tour datesItineraryTour costs, inclusions and exclusionsFlights to KyrgyzstanHealth and fitness, weather and moneyTerms and conditionsHow to bookSeptember 2015 tour. 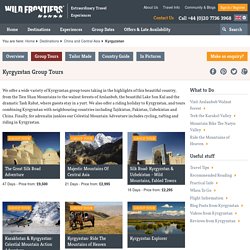 • Bring waterproofs, in the mountains it can rain (or snow) any time. That said you'll need sun cream as well! • Have lunch at 12 Chimneys Restaurant in Ala Madine Gorge on the outskirts of Bishkek – it’s great, and you can even stay the night • Take binoculars - the bird life is surprisingly good Recommended Reading. TIEN-SHAN TRAVEL – Trekking in Kyrgyzstan, Silk Road tours, ascents to Khan Tengri, Pobeda and Lenin peak. Map Data Map data ©2015 Google Map * – The tour is currently suspended due to major changes to the route. 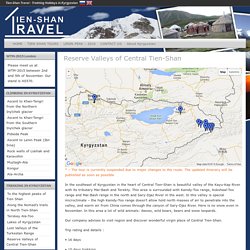 The updated itinerary will be published as soon as possible. Snow leopard conservation holiday in Kyrgyzstan. Travel like a local. Description from the holiday company These conservation working holidays will take you to the Tien Shan mountains of Kyrgyzstan to survey snow leopards and their prey animals such as the Tien Shan argali mountain sheep and the Central Asian ibex, as well as other animals including marmots and birds. You will be working as part of a small international team from a mobile tented base camp set at various locations and altitudes of around 2000 m.

Culinary Tour in Kyrgyzstan. Attention!!! Guaranteed departure date: August 20, 2016 Do not miss your chance and join our fixed date group for this. Best of Kazakhstan & Kyrgyzstan. Highlights Learn about the diverse cultures of Central Asia, soak in the breathtaking mountain scenery, connect with the locals during a yurt stay, wander the Soviet streets of Bishkek. Tour description provided by G Adventures Discover a part of the world that's getting noticed for its beautiful landscapes and its warm people.