Ponta Scan - Professional 3D Scanning at Home by Ponta lab. New 3D bioprinter to reproduce human organs, change the face of healthcare: The inside story - Feature. Researchers are only steps away from bioprinting tissues and organs to solve a myriad of injuries and illnesses. 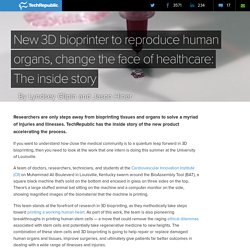 TechRepublic has the inside story of the new product accelerating the process. If you want to understand how close the medical community is to a quantum leap forward in 3D bioprinting, then you need to look at the work that one intern is doing this summer at the University of Louisville. A team of doctors, researchers, technicians, and students at the Cardiovascular Innovation Institute (CII) on Muhammad Ali Boulevard in Louisville, Kentucky swarm around the BioAssembly Tool (BAT), a square black machine that's solid on the bottom and encased in glass on three sides on the top. There's a large stuffed animal bat sitting on the machine and a computer monitor on the side, showing magnified images of the biomaterial that the machine is printing. This team stands at the forefront of research in 3D bioprinting, as they methodically take steps toward printing a working human heart. Bevel – Bevel turns your smartphone into a 3D Camera. Comp Photo Lab » MC3D: Motion Contrast 3D Laser Scanner. 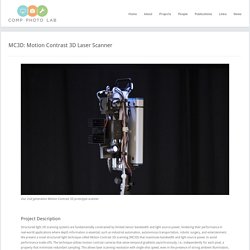 The technique utilizes motion contrast cameras that sense temporal gradients asynchronously, i.e., independently for each pixel, a property that minimizes redundant sampling. This allows laser scanning resolution with single-shot speed, even in the presence of strong ambient illumination, significant inter-reflections, and highly reflective surfaces. Publications. Intelligent computing for everyone everywhere. MobileFusion: Microsoft project turns any smartphone into a 3D scanner. Aug 24, 2015 | By Simon Within the past few years, low-cost object scanning has become increasingly popular thanks in no small part to the increased overall interest in 3D printing from the general public. 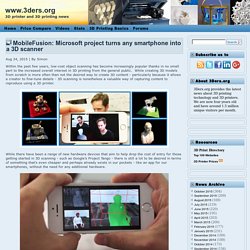 While creating 3D models from scratch is more often than not the desired way to create 3D content - particularly because it allows a creator to fine-tune details - 3D scanning is nonetheless a valuable way of capturing content to reproduce using a 3D printer. While there have been a range of new hardware devices that aim to help drop the cost of entry for those getting started in 3D scanning - such as Google’s Project Tango - there is still a lot to be desired in terms of something that’s even cheaper and perhaps already exists in our pockets - like an app for our smartphones, without the need for any additional hardware. The result of the team’s research and development is a new real-time volumetric surface reconstruction and dense tracking system called MobileFusion. ReconstructMe 3D real-time scanning system now available for free. Sep 15, 2015 | By Kira Our generation’s obsession with selfies doesn’t seem to be coming to an end any time soon, and why should it when companies are making it so easy and fun to take a boring old picture of your face and bring it to entirely new levels? 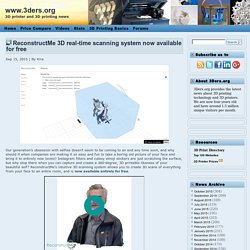 Instagram filters and cutesy emoji stickers are just scratching the surface, but why stop there when you can capture and create a 360-degree, 3D printable likeness of your beautiful self? Orbbec's Persee computer camera, perfect for 3D printable scanning, hits indiegogo. Oct 2, 2015 | By Alec With the prices of 3D printers steadily decreasing, it looks like a similar trend is now affecting other making technologies as well. 3D scanning with an eye on 3D printable designs, for example, is steadily becoming more affordable and more available, and the latest release by Oregon-based Orbbec will only support that trend. 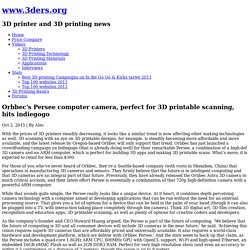 Orbbec has just launched a crowdfunding campaign on Indiegogo (that is already doing well) for their remarkable Persee, a combination of a high-def 3D camera and an ARM computer, which is perfect for building 3D apps and making 3D printable scans. What’s more, it is expected to retail for less than $300. For those of you who’ve never heard of Orbbec, they’re a Seattle-based company (with roots in Shenzhen, China) that specializes in manufacturing 3D cameras and sensors. They firmly believe that the future is in intelligent computing and that 3D cameras are an integral part of that future. Fuboss: noticias. Great review of Fuboss on Fabbaloo. 07 nov 2015 José M. 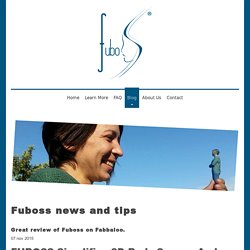 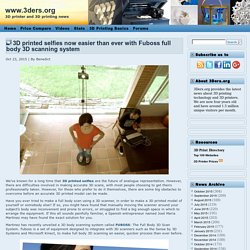 However, there are difficulties involved in making accurate 3D scans, with most people choosing to get theirs professionally taken. However, for those who prefer to do it themselves, there are some big obstacles to overcome before an accurate 3D printed model can be made. FARO's new Freestyle3D X Handheld 3D laser scanner is best used for forensic scene capture. Oct 24, 2015 | By Benedict FARO Technologies will feature its latest Freestyle3D X Handheld 3D Laser Scanner at the IACP 2015 expo this weekend in Chicago, Illinois. 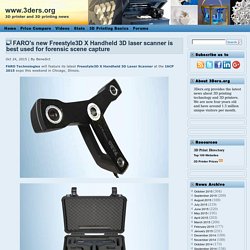 The handheld 3D scanner, which operates with a scanning accuracy of 1mm at a 1m range, has been designed for use in Architecture, Engineering and Construction (AEC), Law Enforcement, and other industries. Home: Meta Augmented Reality. 3D SCANNER - miniFabLab. A 3D scanner is not part of the MIT inventory. 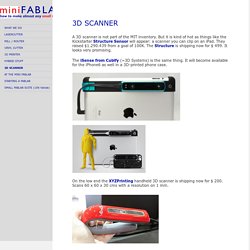 But it is kind of hot as things like the Kickstarter Structure Sensor will appear: a scanner you can clip on an iPad. They raised $1.290.439 from a goal of 100K. The Structure is shipping now for $ 499. It looks very promising. The iSense from Cubify (=3D Systems) is the same thing. Meta Pro Space Glasses - iReviews. “Overall, we find the Meta Pro Space Glasses to be the most innovative glasses to burst out of the world of wearable technology.” 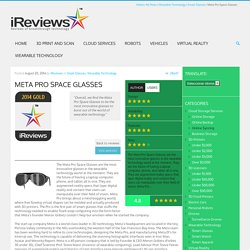 Back to reviews Visit website The Meta Pro Space Glasses are the most innovative glasses in the wearable technology world at the moment. They are the future of having a laptop computer, phone, and tablet all in one. They are augmented reality specs that layer digital reality and content that users can manipulate over their field of vision. South Korean researchers develop user-friendly, handheld 3D scanner and $18 scanner tool for smartphone. Nov 5, 2015 | By Alec It’s one of those things that sound great on paper, but lose their appeal once you check your wallet: 3D scanning. After all, the concept of quickly 3D scanning an object and 3D printing a replica is very appealing, but currently available equipment quickly costs hundreds of dollars. Well, this easy making technique is about to become a whole lot easier and affordable, if a new announcement by South Korean research Institute ETRI is to be believed. 3D scanning technology. 3D Systems Sense 3D scanner. Grande, piccolo, scansiona tutto!

For all their 3D scanners, 3dMF offers on-site installation, training options and ongoing customer support. CNS Control of Glucose Metabolism: Response to Environmental Challenges. Department of Medicine, University of Cincinnati, Cincinnati, OH, USA Over the last 15 years, considerable work has accumulated to support the role of the CNS in regulating postprandial glucose levels. As discussed in the first section of this review, the CNS receives and integrates information from afferent neurons, circulating hormones, and postprandially generated nutrients to subsequently direct changes in glucose output by the liver and glucose uptake by peripheral tissues.

The second major component of this review focuses on the effects of external pressures, including high fat diet and changes to the light:dark cycle on CNS-regulating glucose homeostasis. We also discuss the interaction between these different pressures and how they contribute to the multifaceted mechanisms that we hypothesize contribute to the dysregulation of glucose in type 2 diabetes mellitus (T2DM).

FREE Software: If you don’t already have <> Processing <———->meshLab<———->. Next copy the code into the sketch. Processing Code to Export Point Cloud. Real Time 3D Scanning Software. Multiple Raspberry PI 3D Scanner. UPDATE: Check out step 8 for the latest version of my scanner and a download link for the python scripts.