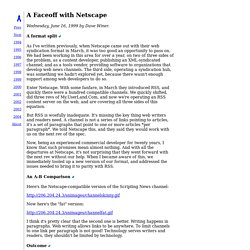 A format split As I've written previously, when Netscape came out with their web syndication format in March, it was too good an opportunity to pass on. We had been working in this area for over a year, on two of three sides of the problem, as a content developer, publishing an XML-syndicated channel; and as a tools vendor, providing software to organizations that develop web news channels. DaveNet : Scripting News in XML. Monday, December 15, 1997 by Dave Winer. 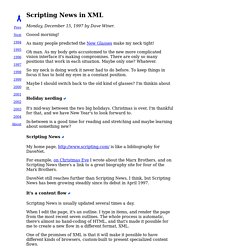 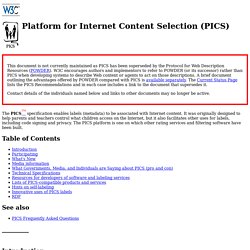 W3C encourages authors and implementors to refer to POWDER (or its successor) rather than PICS when developing systems to describe Web content or agents to act on those descriptions. A brief document outlining the advantages offered by POWDER compared with PICS is available separately. The Current Status Page lists the PICS Recommendations and in each case includes a link to the document that supersedes it. Contact details of the individuals named below and links to other documents may no longer be active. The PICSTM specification enables labels (metadata) to be associated with Internet content. Meta Content Framework Using XML. Submitted to W3C 6 June 97 This document is available at: Previous Version: Editors: 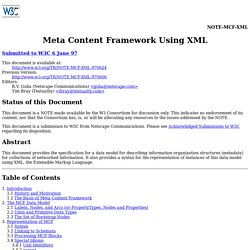 RDF - Semantic Web Standards. Overview RDF is a standard model for data interchange on the Web. 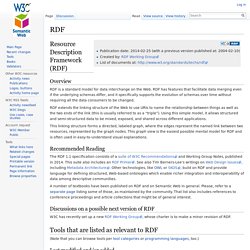 RDF has features that facilitate data merging even if the underlying schemas differ, and it specifically supports the evolution of schemas over time without requiring all the data consumers to be changed. Channel Definition Format Submission 970309. · Submitted to W3C on 09 March 1997 · Date: 3/10/97 Authors: Castedo Ellerman, Microsoft, castedoe@microsoft.com. 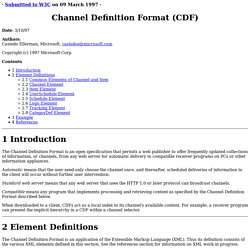 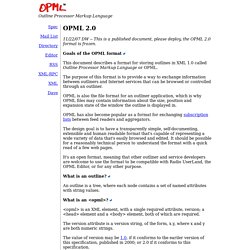 Goals of the OPML format This document describes a format for storing outlines in XML 1.0 called Outline Processor Markup Language or OPML. The purpose of this format is to provide a way to exchange information between outliners and Internet services that can be browsed or controlled through an outliner. OPML is also the file format for an outliner application, which is why OPML files may contain information about the size, position and expansion state of the window the outline is displayed in. OPML 2.0. UserLand RSS Central : UserLand RSS Central. RSS Specifications and RSS Feeds. Payloads for RSS. Thu, Jan 11, 2001; by Dave Winer. 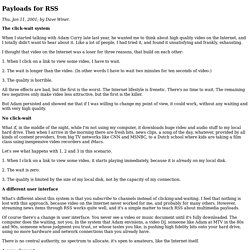 The click-wait system When I started talking with Adam Curry late last year, he wanted me to think about high quality video on the Internet, and I totally didn't want to hear about it. Like a lot of people, I had tried it, and found it unsatisfying and frankly, exhausting. I thought that video on the Internet was a loser for three reasons, that build on each other: 1. Platform for Internet Content Selection (PICS) [July 04, 2000] Abstract: "PICS, the Platform for Internet Content Selection is a system for associating metadata (PICS 'labels') with Internet content. 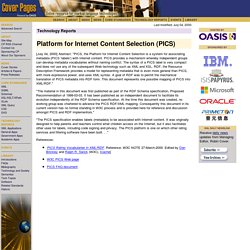 PICS provides a mechanism whereby independent groups can develop metadata vocabularies without naming conflict. The syntax of a PICS label is very compact and does not use any of the subsequent Web technology such as XML and XSL. RDF, the Resource Description Framework provides a model for representing metadata that is even more general than PICS, with more expressive power, and uses XML syntax. A goal of RDF was to permit the mechanical translation of PICS metadata into RDF form. 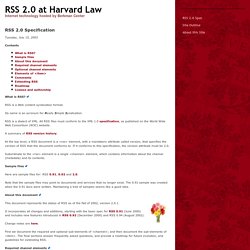 RSS is a Web content syndication format. RFC 4287 - The Atom Syndication Format. [Docs] [txt|pdf] [draft-ietf-atompu...] [Diff1] [Diff2] [IPR] Updated by: 5988 PROPOSED STANDARD Network Working Group M. Example Feed. RSS 1.0 ou RDF Site Summary, spécification du standard en traduction française exacte. RSS 2.0, spécification par Harvard, traduction française stricte. My.UserLand.Com: ScriptingNews 2.0b1. Posted by Dave Winer, 6/15/99 at 8:31:22 PM.History For many people <scriptingNews> format will be new, but it's actually the oldest syndication format on the web. It was first described and deployed publicly in December 1997, has been supported continuously since then, and has been adopted by many actively updated news sites, and it's growing quickly. See this DaveNet piece for background. This format is also called the "fat" syndication format, for obvious reasons. RSS 0.92. New version available, October 2002 RSS 2.0 is the current version. It is upward compatible with 0.92, that is any 0.92 source is also a valid 2.0 source.

Philosophy RSS is a Web content syndication format. How 0.92 relates to 0.91. RSS 0.93. Introduction RSS 0.93 is open for discussion. If you have suggestions, ideas, needs, please discuss them here or on the associated mail list . This format, when finalized, will be upward-compatible with RSS 0.92 and 0.91, meaning that a 0.92 or 0.91 source will also be a valid 0.93 source. RSS 2.0. Contents What is RSS? RSS is a Web content syndication format. Its name is an acronym for Really Simple Syndication. RSS is dialect of XML. The Road to RSS 3.0 (Aaron Swartz: The Weblog) RSS Advisory Board Charter. RSS 2.0 Specification moves to Berkman (RSS 2.0 at Harvard Law) RSS 2.0 Specification (RSS 2.0 at Harvard Law) Dave Winer's Test Site: Icons: It’s still orange – Microsoft RSS Blog. RSS Advisory Board Goes Public. RSS Advisory Board.