College Prep Literature - Bonnie Brown. House of the Dead? by Philip Rahv. One Day in the Life of Ivan Denisovich by Alexander Solzhenitsyn, translated by Max Hayward and Ronald Hingley Frederick A. 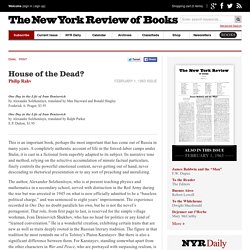 Prager, $3.95 by Alexander Solzhenitsyn, translated by Ralph Parker E.P. This is an important book, perhaps the most important that has come out of Russia in many years. The author, Alexander Solzhenitsyn, who is at present teaching physics and mathematics in a secondary school, served with distinction in the Red Army during the war but was arrested in 1945 on what is now officially admitted to be a “baseless political charge,” and was sentenced to eight years’ imprisonment. As all ideologies are alien to Shukhov, so none can ruin him. One Day first appeared in the Moscow literary monthly Novy Mir for November in 1962 in an edition of 95,000 copies that was at once sold out. Cultural Life in the Soviet Union. By the 19th century, Russian literary arts had reached a peak of world renown: Pushkin, Tolstoy, Dostoevsky and Chekov are all considered icons of classic literature. 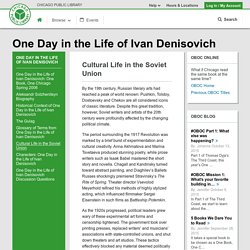 Despite this great tradition, however, Soviet writers and artists of the 20th century were profoundly affected by the changing political climate. The period surrounding the 1917 Revolution was marked by a brief burst of experimentation and cultural creativity. Anna Akhmatova and Marina Tsvetaeva produced stunning poetry, while prose writers such as Isaak Babel mastered the short story and novella.

The Caging of America. A prison is a trap for catching time. 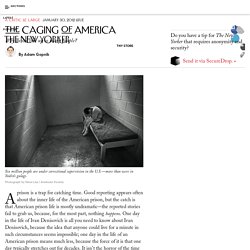 Good reporting appears often about the inner life of the American prison, but the catch is that American prison life is mostly undramatic—the reported stories fail to grab us, because, for the most part, nothing happens. Gulag: Many Days, Many Lives. Soviet authorities presented their camps as the world’s most progressive penal institution—at the forefront of a shift away from punishing and to reeducating prisoners. 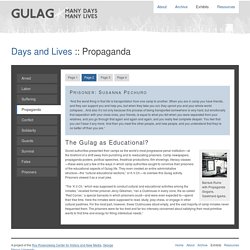 Camp newspapers, propaganda posters, political speeches, theatrical productions, film showings, literacy classes—these were just a few of the ways in which camp authorities sought to convince their prisoners of the educational aspects of Gulag life. They even created an entire administrative structure—the “cultural-educational sections,” or K.V.Ch. —to oversee this Gulag activity. Prisoners viewed it as a cruel joke. “The ‘K.V.Ch.’ which was supposed to conduct cultural and educational activities among the inmates,” recalled former prisoner Jerzy Gliksman, “ran a Clubhouse in every zone, the so-called ‘Red Corner,’ a special barracks in which prisoners could—and were even expected to—spend their free time. Gulag-curriculum.pdf. One Day in the Life of Ivan Denisovich Literature Guide. Page 1 of 5 by Alexander Solzhenitsyn One Day in the Life of Ivan Denisovich by Alexander Solzhenitsyn (sol¢ zhen its¢ in) is an excellent reading choice for high school students. 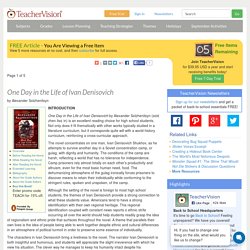 Not only does it fit thematically with other works typically studied in a literature curriculum, but it corresponds quite will with a world history curriculum, reinforcing a cross-curricular approach. The novel concentrates on one man, Ivan Denisovich Shukhov, as he attempts to survive another day in a Soviet concentration camp, or gulag, with dignity and humanity. One Day in the Life of Ivan Denisovich Literature Guide. Gulag: Soviet Forced Labor Camps and the Struggle for Freedom.

Living in the Gulag During their non-working hours, prisoners typically lived in a camp zone surrounded by a fence or barbed wire, overlooked by armed guards in watch towers. 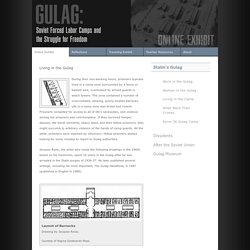 Gulag-curriculum.pdf. The Caging of America - The New Yorker. Stalin's Cult of Personality. Stalin is also known for building an unprecedented cult of personality. 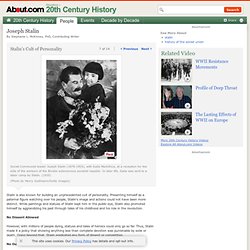 Presenting himself as a paternal figure watching over his people, Stalin's image and actions could not have been more distinct. While paintings and statues of Stalin kept him in the public eye, Stalin also promoted himself by aggrandizing his past through tales of his childhood and his role in the revolution. No Dissent Allowed However, with millions of people dying, statues and tales of heroics could only go so far. Thus, Stalin made it a policy that showing anything less than complete devotion was punishable by exile or death. No Outside Influence Not only did Stalin readily arrest anyone remotely suspected of having a different view, he also closed religious institutions and confiscated church lands in his reorganization of the Soviet Union.

No Free Press. Stalin's Five Year Plans. Stalin's willingness to use brutality to achieve political aims was well established by the time he took power; nevertheless, the Soviet Union (as it was known after 1922) was unprepared for the extreme violence and oppression that Stalin unleashed in 1928. 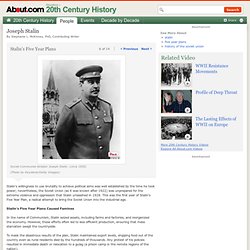 This was the first year of Stalin's Five Year Plan, a radical attempt to bring the Soviet Union into the industrial age. Stalin's Five Year Plans Caused Famines In the name of Communism, Stalin seized assets, including farms and factories, and reorganized the economy. However, these efforts often led to less efficient production, ensuring that mass starvation swept the countryside. The Commissar Vanishes.doc. VOC-105_Study_Guide_Stalin.pdf. Denisovich.pdf. Denisovich.pdf. HIS212.pdf. One Day in the Life of Ivan Denisovich - Reviewed by Robert Gray - Eclectica Magazine v9n3. One_day_in_life.pdf. Flanigan. 201636.pdf. 306366.pdf. One Day in the Life of Ivan Denisovich. Wide Angle . Lesson Plans.

INTRODUCTORY ACTIVITY:Display the images "South Asia Protestors" and "The Unknown Radical" and provide students with a FOCUS FOR MEDIA INTERACTION, asking them to jot down what they see in each image. 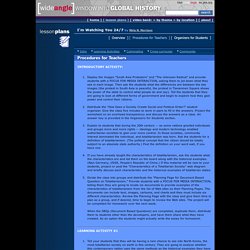 Then ask the students what the differences are between the two images (the protest in South Asia is peaceful, the protest in Tiananmen Square shows the power of the state to control what people do and say). Tell the students that they are going to look at different forms of government and begin to explore how they gain power and control their citizens.Distribute the "How Does a Society Create Social and Political Order? " One Day in the Life of Ivan Denisovich.