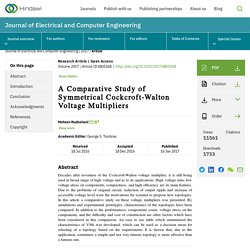 High voltage ratio, low voltage stress on components, compactness, and high efficiency are its main features. Due to the problems of original circuit, reduction of output ripple and increase of accessible voltage level were the motivations for scientist to propose new topologies. In this article a comparative study on these voltage multipliers was presented.

By simulations and experimental prototypes, characteristics of the topologies have been compared. In addition to the performances, components count, voltage stress on the components, and the difficulty and cost of construction are other factors which have been considered in this comparison. 1. Historically the original idea was proposed by Greinacher in 1921. This paper is organized as follows. 2. Figure 1 shows a basic 4-stage Cockcroft-Walton voltage multiplier circuit. 3. Could Einstein get published today? Why not? 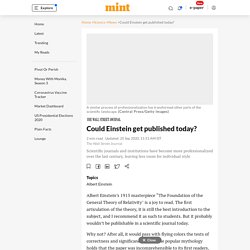 After all, it would pass with flying colors the tests of correctness and significance. And while popular mythology holds that the paper was incomprehensible to its first readers, in fact many papers in theoretical physics are much more difficult. As the physicist Richard Feynman wrote, “There was a time when the newspapers said that only 12 men understood the theory of relativity. I do not believe there ever was such a time. There might have been a time when only one man did, because he was the only guy who caught on, before he wrote his paper. No, the problem is its style. 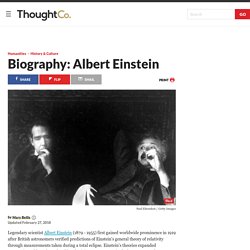 Einstein's theories expanded upon universal laws formulated by physicist Isaac Newton in the late seventeenth century. Before E=MC2 Einstein was born in Germany in 1879. Growing up, he enjoyed classical music and played the violin. One story Einstein liked to tell about his childhood was when he came across a magnetic compass. Even as a small boy Einstein was self-sufficient and thoughtful. Einstein in Oxford. Black hole SHOCK: Merging black holes prove Albert Einstein was RIGHT 100 years ago. Black holes remain one of the biggest mysteries of the cosmos even 103 years after physicist Karl Schwarzschild first predicted their existence. 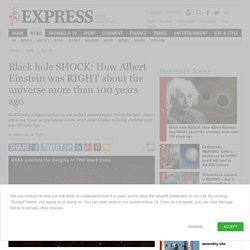 Black holes cannot be seen or measured in conventional methods, and until recent developments, remained a hypothetical scenario. In 2015, scientists detected the side effect of two black holes merging together, which seemingly proved right one of the brightest minds of the 20th century – Albert Einstein. Black holes locked into an orbit around one another – binary black holes – will eventually fall towards each other and merge. The tremendous force of impact radiates so-called gravitational waves, which according to the European Space Agency (ESA) are “fluctuations in the fabric of spacetime”. Both black holes and gravitational waves were resolved from Einstein’s theory of general relativity, which the German-born physicist presented in 1915. General relativity remains to date the best theory explaining the inner-machinations of the universe. Einstein, Rejection, and Crafting a Future. 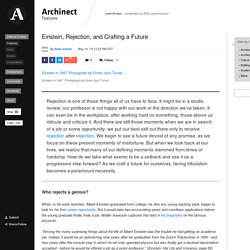 Photograph by Orren Jack Turner. Rejection is one of those things all of us have to face. It might be in a studio review; our professor is not happy with our work or the direction we've taken. It can even be in the workplace, after working hard on something, those above us ridicule and criticize it. And there are still those moments when we are in search of a job or some opportunity; we put our best self out there only to receive rejection after rejection. Who rejects a genius? When, in his early twenties, Albert Einstein graduated from college, he, like any young aspiring adult, began to look for his first career opportunity. "Among the many surprising things about the life of Albert Einstein was the trouble he had getting an academic job.

The job Einstein took after his two-year search was at the Swiss Patent Office, a posting not typical for someone with a degree in physics and mathematics — he was desperate to provide for his family. Time to mope? Choice page. Celebrating Einstein, the scientist-statesman. Many of science’s most well-recognised symbols are related to one specific scientist. 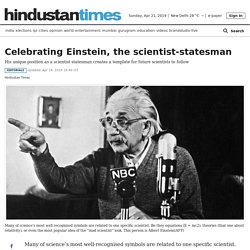 Be they equations (E = mc2), theories (that one about relativity), or even the most popular idea of the mad scientist look. This person is Albert Einstein, who died this past week in 1955 (and whose most famous theory, the General Theory of Relativity, was published this month in 1914). Albert Einstein — the scientist, the philosopher, the public intellectual — left such a mark on the society he lived in that his name has become synonymous with brilliance. Choice page. A Classic Formula For Pi Is Hidden in Hydrogen Atoms.