Shouldn't You Be in School? by Lemony Snicket - review. I know they say that you shouldn't judge a book by its cover – but the cover of this book is so beautifully and stylishly designed that it compels you to pick it up, and of course once you start reading you find that the writing inside is as stylish as the outside of the book! 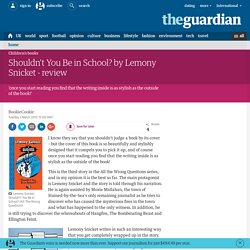 This is the third story in the All the Wrong Questions series, and in my opinion it is the best so far. The main protagonist is Lemony Snicket and the story is told through his narration. He is again assisted by Moxie Mallahan, the town of Stained-by-the-Sea's only remaining journalist as he tries to discover who has caused the mysterious fires in the town and what has happened to the only witness. The Invention of Hugo Cabret by Brian Selznick - review. A Room Full of Chocolate by Jane Elson - review. The BFG by Roald Dahl - review. The Fault in Our Stars by John Green - review. In this book the main character is called Hazel. 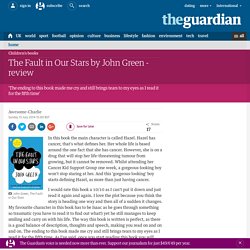 Hazel has cancer, that's what defines her. Her whole life is based around the one fact that she has cancer. However, she is on a drug that will stop her life-threatening tumour from growing, but it cannot be removed. The Boy Who Sailed the Ocean in an Armchair by Lara Williamson – review. Becket Rumsey, his brother Billy and a snail called Brian have some serious investigating to do! 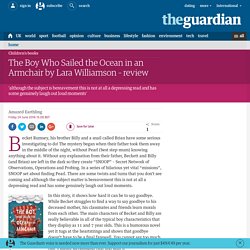 The mystery began when their father took them away in the middle of the night, without Pearl (best step-mum) knowing anything about it. Without any explanation from their father, Beckett and Billy (and Brian) are left in the dark so they create “SNOOP” – Secret Network of Observations, Operations and Probing. In a series of hilarious yet vital “missions”, SNOOP set about finding Pearl. There are some twists and turns that you don’t see coming and although the subject matter is bereavement this is not at all a depressing read and has some genuinely laugh out loud moments.

Time Travelling With a Hamster by Ross Welford – review. Al (short for Albert Einstein Hawking Chaudhury) lives with his mother, his step-dad Steve, his half-sister Carly and his amazing Grandpa Byron. 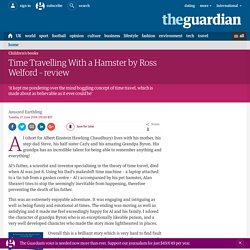 His grandpa has an incredible talent for being able to remember anything and everything! Al’s father, a scientist and inventor specialising in the theory of time travel, died when Al was just 8. Using his Dad’s makeshift time machine – a laptop attached to a tin tub from a garden centre – Al ( accompanied by his pet hamster, Alan Shearer) tries to stop the seemingly inevitable from happening, therefore preventing the death of his father. This was an extremely enjoyable adventure. It was engaging and intriguing as well as being funny and emotional at times. Write your own Shakespeare Tales by Deborah Patterson – review. As the world celebrates legendary playwright and poet Shakespeare’s 400th anniversary, this book is a brilliant guide book/activity book about all things Shakespearean. 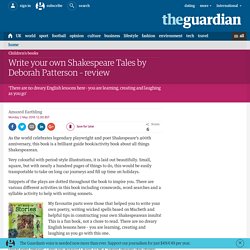 Very colourful with period-style illustrations, it is laid out beautifully. Small, square, but with nearly a hundred pages of things to do, this would be easily transportable to take on long car journeys and fill up time on holidays. Snippets of the plays are dotted throughout the book to inspire you. Coraline by Neil Gaiman - review. It is the summer holidays and Coraline is at a loose end. 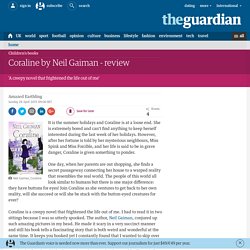 She is extremely bored and can't find anything to keep herself interested during the last week of her holidays. However, after her fortune is told by her mysterious neighbours, Miss Spink and Miss Forcible, and her life is said to be in grave danger, Coraline is given something to ponder. One day, when her parents are out shopping, she finds a secret passageway connecting her house to a warped reality that resembles the real world. The people of this world all look similar to humans but there is one major difference: they have buttons for eyes! Join Coraline as she ventures to get back to her own reality, will she succeed or will she be stuck with the button-eyed creatures for ever?

Arsenic for Tea by Robin Stevens - review. This is the second book in the Wells and Wong Mystery series. 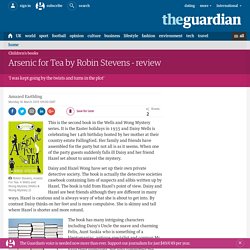 It is the Easter holidays in 1935 and Daisy Wells is celebrating her 14th birthday hosted by her mother at their country estate Fallingford. Her family and friends have assembled for the party but not all is as it seems. When one of the party guests suddenly falls ill Daisy and her friend Hazel set about to unravel the mystery. The Bad Beginning by Lemony Snicket - review. This book starts off with 3 children (the Baudelaires) receiving some very devastating news that their parents have just perished in a terrible fire that has also destroyed their beautiful mansion. 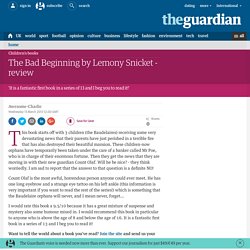 These children-now orphans have temporarily been taken under the care of a banker called Mr Poe, who is in charge of their enormous fortune. Then they get the news that they are moving in with their new guardian Count Olaf. Will he be nice? - they think worriedly. I am sad to report that the answer to that question is a definite NO! Fortunately, the Milk by Neil Gaiman - review.

Fortunately, the Milk by Neil Gaiman tells the story of how a Dad's trip to the corner shop to get some milk ended up rather lengthy, involving fantastical creatures such as slimy green aliens. 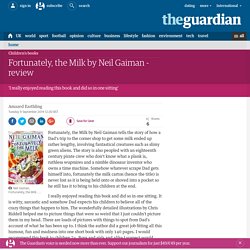 The story is also peopled with an eighteenth century pirate crew who don't know what a plank is, ruthless wupmires and a nimble dinosaur inventor who owns a time machine. Somehow whatever scrape Dad gets himself into, fortunately the milk carton (hence the title) is never lost as it is being held onto or shoved into a pocket so he still has it to bring to his children at the end. Lockwood & Co.: The Screaming Staircase by Jonathan Stroud - review. This is the first in a new series featuring Lookwood and Co. 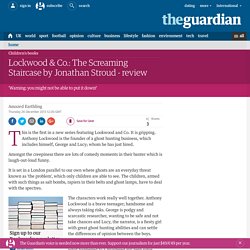 It is gripping. Anthony Lockwood is the founder of a ghost hunting business, which includes himself, George and Lucy; whom he has just hired. Amongst the creepiness there are lots of comedy moments in their banter which is laugh-out-loud funny. It is set in a London parallel to our own where ghosts are an everyday threat known as 'the problem', which only children are able to see. Horrid Henry and the Football Fiend by Francesca Simon - review. Diary of a Wimpy Kid: Cabin Fever by Jeff Kinney - review. Meet the children's books site members: 8-12 years, A-B.

a007 Me in 10 words: Bubbly, creative, inquisitive, thoughtful, geek-chick, foodie, sea-lover Favourite authors: Jacqueline Wilson, Enid Blyton, Jean Ure a007’s contributions:• Diary of a Wimpy Kid: The Third Wheel by Jeff Kinney Me in 10 words: I am funny and weird. I like art and swimming.