Hardening SSH security on your ReadyNAS. If you have installed the EnableRootSSH add-on on your ReadyNAS, and especially if you have configured your router or NAS to be accessible through SSH over the internet, this post might be of interest to you. Being able to access your ReadyNAS through SSH from anywhere in the world is a great thing, but what the EnableRootSSH add-on does is enabling that access as a root user on the default SSH port 22. That is not A Good Thing, and here’s why. SSH uses port 22 by default. Since there are a lot of people with bad intentions in the world, the internet is flooded with “bots” that scan each and every single possible public IP-address, checking for open ports.

As you need to be able to access your box over the internet, you have set up port forwarding on your router to allow incoming TCP traffic on port 22. If such a bot were to be successful in gaining access to your box over SSH, 2 scenario’s lie open. The port the SSH daemon listens onmaking it impossible to login as root through SSH. LMS for OS6. OS6 now works on x86 Legacy WARNING: NO NTGR SUPPORT! I've been dabbling with this idea myself for awhile, but had some hopes of RAIDiator 5 arriving.Thanks to AMRivlin for bringing this up.Decided to hack my Ultra 6 with a standard OS, but if people are willing to contribute to a proper solution, I am all game.I am puzzled by Netgear missing an excellent oppertunity to unify their OS base.Now they will have to maintain RAIDiator 4, RAIDiator 5, ReadyNAS OS 6, and READdata OS.And why on earth have they overlapping product portfolio on the SMB/ME marked? 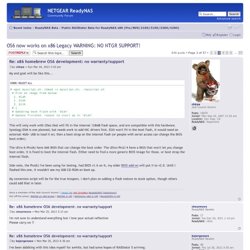 Please be aware that ReadyNAS OS 6 source will NOT include ReadyCLOUD, ReadyDROP, webGUI, genie, replicate etc, etc.Those components are closed source. Based on RAIDiator source, the core is pretty much stock debian.I think there are only a few drivers missing for full HW support in up2date linux kernel: front button, LCD and ??? So what we will get access to is only a slightly modified Debian install, so why not go with stock Debian, or some other distro? 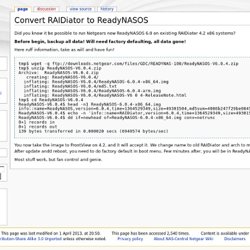 Before begin, backup all data! Will need factory defaulting, all data gone! Here ruff information, take as will and have fun! OS6 now works on x86 Legacy WARNING: NO NTGR SUPPORT! I too am more of a 'hardware' guy than dev but I can at least offer to beta test on any of the models I own or have access to.

I still remain confused by Netgear's stance on supporting existing x86 models. Quoting JabbaTheHut: The ReadyNAS OS 6 is only available on the new products. We are not supporting units in the field based on older operating system versions to the latest version. There are many reasons for this. Fundamental file system change, agreed. Btrfs can warp to fit unusual spatial layouts because it has very little metadata anchored in fixed locations. Makes it sound less daunting?

Are there any encrypted modules or a requirement for encryption in the boot image? OS6 now works on x86 Legacy WARNING: NO NTGR SUPPORT! View topic - Latest version for ReadyNAS Duo V2? Hola to all, Brand new noob to ownCloud here! 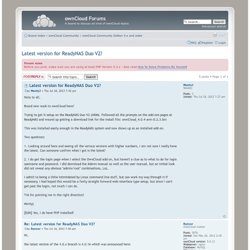 Trying to get it setup on the ReadyNAS Duo V2 (ARM). Followed all the prompts on the add-ons pages at ReadyNAS and wound up getting a download link for the install file: ownCloud_4.0.4-arm-0.2.3.bin This was installed easily enough in the ReadyNAS system and now shows up as an installed add-on. Two questions: Replacing the OS on a ReadyNAS Ultra 6. NAS4Free is the evolution of FreeNAS as it stood before the switch to Django. There are now two separate projects and developer communities. After installing NAS4Free, I encountered more grief when attempting to create a nested RAID volume. At a few different times I was left wondering which of the different and potentially destructive "rescan volumes and delete/import config" buttons to click. Nested RAID volume documentation was next to nonexistent. (Two sentences, one of which is "it’s complicated".) Initial trouble aside, the experience was pleasant and I copied my data over (~85MB/sec) and set up AFP, CIFS and rsync.

However, over the next 18 hours the Ultra 6 became unreachable three times. There was a system-wide PCI MSI tunable but NAS4Free’s drawbacks were adding up and I felt it was worthwhile investigating another distro before I invested any more time in it. OwnCloud 4.0.4. A central place to check out community add-on releases for the ReadyNAS Ultra, Pro, NVX, 2100, 3100, 3200, 4200. 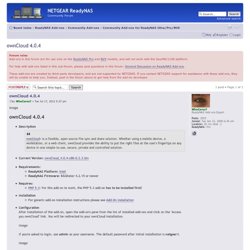 Forum rules Add-ons in this forum are for use only on the ReadyNAS Pro and NVX models, and will not work with the Duo/NV/1100 platform.