Why Privacy Matters – DataRainbow. Keeping an eye. Memory, Forgetfulness and Privacy. If your shop assistant was an app (hidden camera) People vs. Adtech. Core course: Data, surveillance and capitalism. Description of qualifications Purpose: Google, Facebook, and other giants of the tech industry have established their business through surveillance and the selling of our private data. 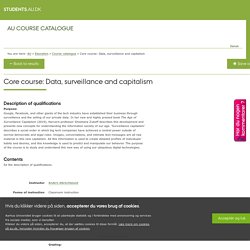 In her new and highly praised book The Age of Surveillance Capitalism (2019), Harvard professor Shoshana Zuboff describes this development and presents new concepts for understanding the information society of our age. ‘Surveillance capitalism’ describes a social order in which big tech companies have achieved a central power outside of normal democratic and legal rules. Images, conversations, and intimate text messages are all raw material in this new capitalism. 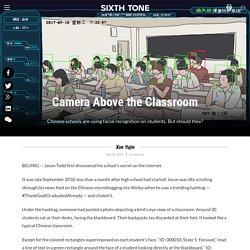 It was late September 2018, less than a month after high school had started. Jason was idly scrolling through his news feed on the Chinese microblogging site Weibo when he saw a trending hashtag — #ThankGodIGraduatedAlready — and clicked it. The Dark Side of Numbers: Updated. 2018 AEP Going Darker Phase2. Parenting for a Digital Future – What is the Children’s Data and Privacy Onli... Schools are using AI to help pick students. What could go wrong? Subscribe to read. Jeremy was fired for refusing fingerprinting at work. His case led to an 'ext... TfL will track tube passengers to improve its service. Transport for London will start tracking the movements of passengers on the London Underground from next month, the company has announced. 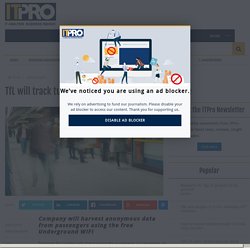 Beginning on 8 July, TfL will begin using the free Wi-Fi service provided throughout the tube network to gather information on the movements of passengers through the system. Anyone that connects to the Wi-Fi will be tracked as part of the scheme. An early pilot was held for four weeks in 2016 across more than 50 tube stations, during which TfL gathered data on more than 42 million journeys. The aim of the programme will be to give TfL more granular data on passenger movement within stations, allowing them to inform customers more accurately about the state of the network, taking things like foot congestion and overcrowding into consideration, as well as train schedules. Online identification is getting more and more intrusive - Behavioural biometrics.

MOST ONLINE fraud involves identity theft, which is why businesses that operate on the web have a keen interest in distinguishing impersonators from genuine customers. Passwords help. But many can be guessed or are jotted down imprudently. Newer phones, tablets, laptops and desktop computers often have beefed-up security with fingerprint and facial recognition. But these can be spoofed. Apple Sued by Customers Claiming Their iTunes Information Was Sold to Third P... Apple privacy policy maintains the company collects data but it is not directly tied to specific users.

Apple has been hit with a class action federal lawsuit by customers who are alleging that information on their iTunes purchases was sold by Apple to third parties. The plaintiffs are seeking an excess of $5 million in damages, according to the lawsuit that was filed May 24 in California’s Northern Federal District. Leigh Wheaton, Jill Paul and Trevor Paul, three iTunes users from Rhode Island and Michigan, filed the lawsuit claiming that despite the fact that Apple engaged in an ad campaign “touting its supposedly pro-consumer positions on issues of data privacy” and even put up a billboard in Vegas with the slogan “What happens on your iPhone stays on your iPhone," they were also mining and selling person information to third parties.

The parties complain that the collection of the data was done in violation of their own individual states' privacy laws. Experts: Spy used AI-generated face to connect with targets. LONDON (AP) — Katie Jones sure seemed plugged into Washington’s political scene. 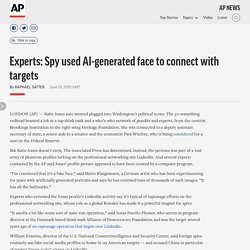 I’m a Judge. Here’s How Surveillance Is Challenging Our Legal System. Although I grant requests from prosecutors far more often than I deny them, I’ve written several opinions disagreeing with them on the use of investigative technology. 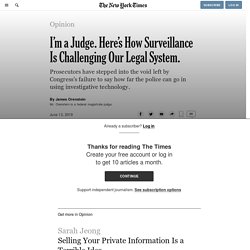 As a former prosecutor, I understand their preference that other judges consider requests on surveillance technologies. My goal in deciding these issues (and the goal of some like-minded colleagues) is not to say no to the government but to ask the right question. It’s not enough to search laws written before modern technology and find one that comes closest to fitting today’s facts.

The question is whether any law allows a judge to issue the order the government wants. If no such law exists, society needs to make deliberate choices about how best to balance the promise of more efficient investigative technologies against the risks to personal liberty. Amp.ft. Would you recognise yourself from your data? Surveillance cameras will soon be unrecognisable – time for an urgent public ... It is often argued that the UK is the most surveilled country on the planet. 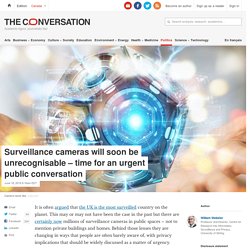 This may or may not have been the case in the past but there are certainly now millions of surveillance cameras in public spaces – not to mention private buildings and homes. Behind those lenses they are changing in ways that people are often barely aware of, with privacy implications that should be widely discussed as a matter of urgency. Automatic face recognition is currently the hot ticket in this industry, having been introduced in a number of cities around the world, in the US, China, Germany and Singapore. The police argue that piloting such systems has allowed them to test the technology to help identify potential terrorists and other known offenders. Yet this has to be weighed against different concerns. 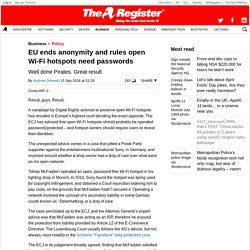 Result. A campaign by Digital Rights activists to preserve open Wi-Fi hotspots has resulted in Europe’s highest court deciding the exact opposite. The ECJ has advised that open Wi-Fi hotspots should probably be operated password-protected – and hotspot owners should require users to reveal their identities. The unexpected advice comes in a case that pitted a Pirate Party supporter against the entertainment multinational Sony, in Germany, and revolved around whether a shop owner had a duty of care over what went on his open network. The Gift that Keeps on Giving: Google, Ingress, and the Gift of Surveillance. Sarah Jamie Lewis - Building Consensual Tech. A thread written by @SarahJamieLewis - Internet Privacy News. Sarah Jamie Lewis @SarahJamieLewis Executive Director @OpenPriv. 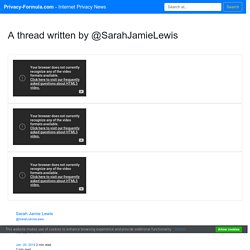 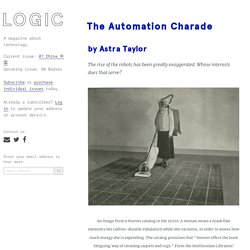 Whose interests does that serve? An image from a Hoover catalog in the 1920s. For Owners of Amazon's Ring Security Cameras, Strangers May Have Been Watching. The “smart home” of the 21st century isn’t just supposed to be a monument to convenience, we’re told, but also to protection, a Tony Stark-like bubble of vigilant algorithms and internet-connected sensors working ceaselessly to watch over us. Bentham, Deleuze and Beyond: An Overview of Surveillance Theories from the Panopticon to Participation.

Safe Crime Detection - i am trask. OPN Reading Group – OPN. Shoshana Zuboff’s new book, The Age of Surveillance Capitalism, is an investigation of the business model (and logic of accumulation) underlying the giants of Big Data. 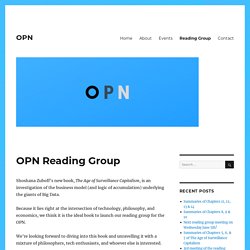 China social scoring. Corporate Surveillance in Everyday Life. Google and Facebook, followed by other large platforms such as Apple, Microsoft, Amazon and Alibaba have unprecedented access to data about the lives of billions of people. Although they have different business models and therefore play different roles in the personal data industry, they have the power to widely dictate the basic parameters of the overall digital markets. Hidden cameras. Choice page.

Carnival Fantasy - There's a video camera in my room! Here's What the Big Tech Companies Know About You. Insurance Companies Are Monitoring Personal Telemetry. China's Social Credit System: An Evolving Practice of Control by Rogier Creemers. Beijing to Judge Every Resident Based on Behavior by End of 2020.

An 80 minute documentary makes the case for data access and priv. Privacy in social web. Your most dangerous possession? Your smartph. Do U know whos watching you. Password security. School laptops camera. DigitalFootprint.