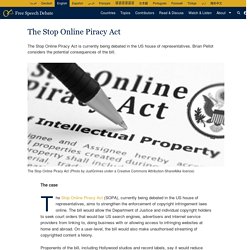 Brian Pellot considers the potential consequences of the bill. The case The Stop Online Piracy Act (SOPA), currently being debated in the US house of representatives, aims to strengthen the enforcement of copyright infringement laws online. The bill would allow the Department of Justice and individual copyright holders to seek court orders that would bar US search engines, advertisers and internet service providers from linking to, doing business with or allowing access to infringing websites at home and abroad. On a user-level, the bill would also make unauthorised streaming of copyrighted content a felony.

Proponents of the bill, including Hollywood studios and record labels, say it would reduce illegal copyright infringement. Read more: CopyrightInternetLawMoneyPiracyUnited States. Downloads. Wikipedia logo. The logo of Wikipedia, an Internet-based free multilingual encyclopedia, is an unfinished globe constructed from jigsaw pieces—some pieces are missing at the top—inscribed with glyphs from many different writing systems. 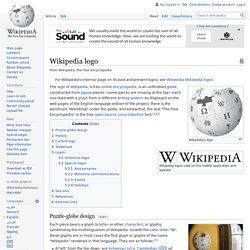 As displayed on the web pages of the English-language version of Wikipedia, there is a wordmark "Wikipedia" under the globe, and below that the text "The Free Encyclopedia", in the free open-source Linux Libertine font.[1][2] Design[edit] 989 Design » AOL. Does anybody remember when America Online was the 400-pound gorilla of the online world? 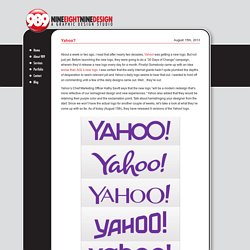 There were many ways to go online, but AOL made the whole process very easy. AOL put together a marketing plan that included mailing CDs with their software to every man, woman, child and family pet in North America. The plan worked, though, as people were signing up as fast as AOL could send the CDs out. For years, this was the first thing you saw on the screen, just before hearing the ubiquitous, “You’ve got mail.” While the logo isn’t great, it’s not horrible, either. Internet Clipart. Internet pioneer Leonard Kleinrock on the 'dark side' of the Web. What is the difference between a router and a modem? Answer: Routers and modems are two of the most common computer peripherals, yet many people don't know the function of each one.

While the two devices may look similar, they each serve a difference purpose. Fortunately, the functions of the two devices are pretty easy to understand. A router is a small box that allows multiple computers to join the same network (see below). While early routers provided several Ethernet ports for wired connections, most modern routers offer wireless connectivity as well. These "wireless routers" often have one or two moveable antennas on the sides, though some models house the antennas inside the enclosure.

While connecting to a router provides access to a local network (LAN), it does not necessarily provide access to the Internet. A modem is a device that provides access to the Internet (see below). The modem connects to your ISP, which typically provides either cable or DSL Internet service. To summarize, the device connection order is outlined below: Definition of Internet by Merriam-Webster. EXTRAÑAS PRESENCIAS: febrero 2012. 15 de Mayo de 1.960. 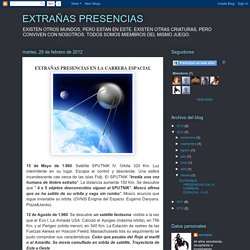 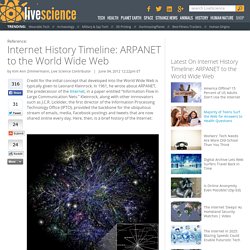 In 1961, he wrote about ARPANET, the predecessor of the Internet, in a paper entitled “Information Flow in Large Communication Nets.” Kleinrock, along with other innnovators such as J.C.R. Hobbes' Internet Timeline - the definitive ARPAnet & Internet history. 1950s | 1960s | 1970s | 1980s | 1990s | 2000s | 2010s | Growth | FAQ | Sources by Robert H'obbes' Zakon with support from Zakon Group LLC and OpenConf Interested in having Hobbes speak on the history of Internet technology and innovation at your event? 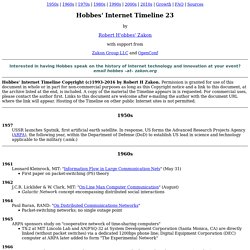 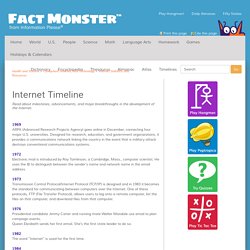 Designed for research, education, and government organizations, it provides a communications network linking the country in the event that a military attack destroys conventional communications systems. Electronic mail is introduced by Ray Tomlinson, a Cambridge, Mass., computer scientist. He uses the @ to distinguish between the sender's name and network name in the email address. Transmission Control Protocol/Internet Protocol (TCP/IP) is designed and in 1983 it becomes the standard for communicating between computers over the Internet.

One of these protocols, FTP (File Transfer Protocol), allows users to log onto a remote computer, list the files on that computer, and download files from that computer. Presidential candidate Jimmy Carter and running mate Walter Mondale use email to plan campaign events.