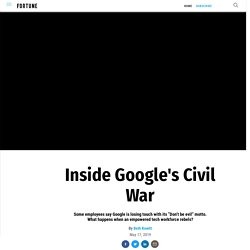 Thirteen hours later, the elevators at the company’s New York City headquarters were so packed that workers took the stairs down to the street to protest. Google employees in Austin observed two minutes of silence for victims of sexual assault as part of their demonstration. In San Francisco, hundreds of employees gathered across from the historic Ferry Building and chanted “Time’s Up at Google” and held signs with slogans like “Workers’ Rights Are Women’s Rights” and “Free Food ≠ Safe Space.” How Google Tracks Your Personal Information – Member Feature Stories. When lazy journalists are pessimistic about Amazon’s Alexa or Google Home, they say stuff like: “Even Orwell couldn’t have predicted that we’d willingly bring Big Brother into our own homes.” 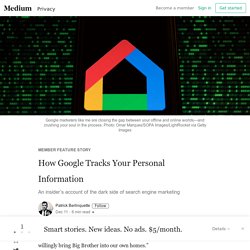 What they fail to mention is our willingness to exchange privacy for convenience didn’t start with the advent of virtual assistants. An exclusive look inside Google in-house incubator Area 120. Google’s “Smart City” in Toronto Faces New Resistance. The world’s most ambitious “smart city,” known as Quayside, in Toronto, has faced fierce public criticism since last fall, when the plans to build a neighborhood “from the internet up” were first revealed. 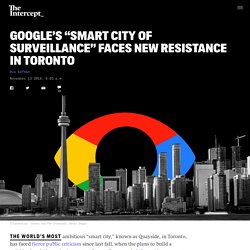 Quayside represents a joint effort by the Canadian government agency Waterfront Toronto and Sidewalk Labs, which is owned by Google’s parent company Alphabet Inc., to develop 12 acres of the valuable waterfront just southeast of downtown Toronto. In keeping with the utopian rhetoric that fuels the development of so much digital infrastructure, Sidewalk Labs has pitched Quayside as the solution to everything from traffic congestion and rising housing prices to environmental pollution. The proposal for Quayside includes a centralized identity management system, through which “each resident accesses public services” such as library cards and health care. Toronto Open Smart Cities Forum is taking the lead in the local fight against the commodification of its city’s data. Google IO keynote summary: the 10 biggest announcements. Inside Google’s plan to build a smart neighborhood in Toronto. Google's Walled Garden: Are We Being Pushed Out of Our Own Digital Backyards? Google is really good at design.

There’s a past version of me who probably wouldn’t have believed that the devices Google announced at its fall event were actually designed by Google. 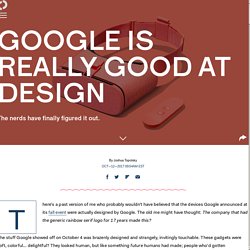 The old me might have thought: The company that had the generic rainbow serif logo for 17 years made this? The Inside Story of Google’s Daydream, Where VR Feels Like Home. A few minutes after Google CEO Sundar Pichai finished speaking to the crowd at a Google developer conference one sunny June morning in 2014, Jon Wiley made his way over to a newly unveiled booth inside San Francisco’s Moscone conference center, where the event was being held. 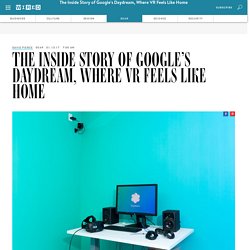 He’d been struck by something near the end of Pichai’s remarks. Pichai had mentioned, almost in passing, that everyone in the audience would be getting something called Cardboard. It had something to do with virtual reality. This was the first Wiley had heard of the project, or anything having to do with Google and VR. You might think he’d get some early notice, since he’s one of the company’s most celebrated and long-tenured designers, perhaps the person most responsible for the Overall Google Aesthetic.

For the several years leading up to this, Wiley’s job had been designing the company’s search products, like voice search and the iconic Omnibox. The User as Interface. Alphabet cuts former Titan drone program from X division, employees dispersing to other units. In 2014, Google bought Titan Aerospace, maker of high altitude, solar-powered drone aircraft. 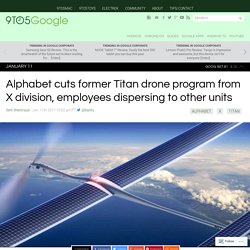 At the time Google noted, “It’s still early days, but atmospheric satellites could help bring internet access to millions of people, and help solve other problems, including disaster relief and environmental damage like deforestation.” Titan previously said that its drones could collect real-time, high-resolution images of the earth, carry other atmospheric sensors and support voice and data services. A video of the Titan Aerospace Solara 50 can be seen below… The Titan division was absorbed into X in late 2015 from the Access and Energy division during the Alphabet re-shuffle. Since the pickup, Google has revealed other internal Drone-projects including project Black Rock and Project Wing delivery drones as well as a Tango-based prototype. The (updated) history of Android. OK Google: Where Do You Store Recordings Of My Commands? : All Tech Considered. Itoggle caption Ariel Zambelich/NPR Sure, our smartphones know a lot about who we are. 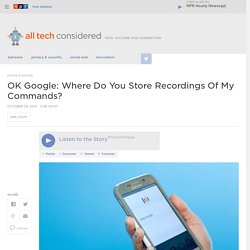 If you have an Android smartphone, you may not know that Google saves all of the voice commands you give it. They're archived online in your Google account. Google says it keeps the audio search information to improve its voice recognition. Google Hires Leading Researcher to Build a Quantum Computer. Google is about to begin designing and building hardware for a quantum computer, a type of machine that can exploit quantum physics to solve problems that would take a conventional computer millions of years. 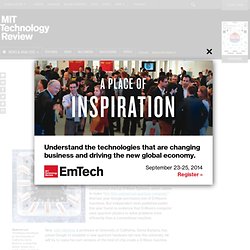 Google gets into game of drones - Tony Romm. Google long ago embarked on the road to self-driving cars — and now the company is turning its ambitions to the skies with drones. 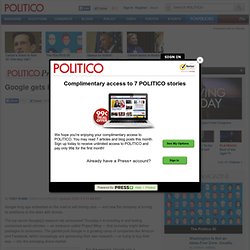 The top secret Google[x] research lab announced Thursday it is investing in and testing unmanned aerial vehicles — an endeavor called Project Wing — that someday might deliver packages to consumers. The gambit puts Google in a growing camp of companies like Amazon and Facebook, which increasingly are sponsoring their own research — or trying to buy their way — into the emerging drone market. Continue Reading For the moment, Google only is experimenting with its prototype craft in Australia, not the United States.

Feds warn first responders of dangerous hacking tool: Google Search. In a restricted intelligence document distributed to police, public safety, and security organizations in July, the Department of Homeland Security warned of a “malicious activity” that could expose secrets and security vulnerabilities in organizations’ information systems. 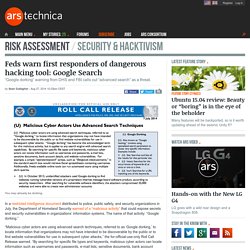 The name of that activity: “Google dorking.” “Malicious cyber actors are using advanced search techniques, referred to as ‘Google dorking,’ to locate information that organizations may not have intended to be discoverable by the public or to find website vulnerabilities for use in subsequent cyber attacks,” the for-official-use-only Roll Call Release warned. “By searching for specific file types and keywords, malicious cyber actors can locate information such as usernames and passwords, e-mail lists, sensitive documents, bank account details, and website vulnerabilities.” Bad queries. These are the secrets Google wanted to keep about its self-driving cars. Google’s experimental self-driving cars have traveled more than 700,000 miles on California’s roads with nothing more serious than a fender bender, and that one while a human was driving.

But if the company had gotten its way, you might not know about the episode. According to documents obtained under freedom-of-information legislation and seen by Quartz, Google lobbied Californian regulators for permission to keep minor accidents secret, as long as the car was not driving itself at the time. Ron Medford, director of safety for Google’s self-driving car program, wrote that the regulations “should be amended to limit required reporting to accidents involving vehicles operated in autonomous mode.”

Google also wanted to remove a section obliging it to record data related to “disengagements”—when the robotic car hands back control to its human test driver. These disengagements may be quite routine, for example, when the vehicle approaches an area it doesn’t have maps for. Hacking Gmail with 92 percent success. (Phys.org) —A team of researchers, including an assistant professor at the University of California, Riverside Bourns College of Engineering, have identified a weakness believed to exist in Android, Windows and iOS mobile operating systems that could be used to obtain personal information from unsuspecting users.

They demonstrated the hack in an Android phone. The researchers tested the method and found it was successful between 82 percent and 92 percent of the time on six of the seven popular apps they tested. Among the apps they easily hacked were Gmail, CHASE Bank and H&R Block. Amazon, with a 48 percent success rate, was the only app they tested that was difficult to penetrate. The paper, "Peeking into Your App without Actually Seeing It: UI State Inference and Novel Android Attacks," will be presented Friday, Aug. 22 at the 23rd USENIX Security Symposium in San Diego. Android’s L release beta in pictures. Android's L release beta isn't out until tomorrow, but there are a few devices here at Google I/O that just happen to be running the new OS. The demo units aren't finished, but what's here gives us a good look at what the future of Android looks like.

The general theme of the interface is cards, cards, and more cards. The most immediately noticeable change is the new system bar, which uses triangle, circle, and square buttons. F-Droid. You can spy on Google’s spy balloons using regular flight-tracking tools. By Christopher Goscinski On July 7, 2014 Google’s Project Loon — “balloon-powered Internet for everyone” — is something you’ve likely heard about. You might even have read concerns about how they could, in theory at least, be used for spying. But, unless you live near South Island, New Zealand, it’s unlikely you’ll have actually seen one of Google’s fancy hi-tech balloons. If you’re curious where they are, though, it turns out there’s a way to find out. Even though they fly between 60,000 and 90,ooo ft., well above commercial (and even most military) air traffic, the balloons are still assigned flight numbers.

Today, there seem to be only five balloons in the air off the coast of New Zealand. Inside Google Shopping Express’ Big Plan to Race Amazon to Your Door. Google is the undisputed king of search in all but one lucrative and vital category: Product searches. Over the past decade, Amazon has transformed itself from a seller of books online to the place Americans turn to when they want to search and buy just about anything — from diapers to flat-screen TVs.

In some cities, Amazon has started delivering fresh groceries. With each product search that starts on Amazon instead of Google, the search giant’s main business of selling ads alongside search results weakens.