Artificial Intelligence Could Improve Health Care for All — Unless it Doesn't. You could be forgiven for thinking that AI will soon replace human physicians based on headlines such as “The AI Doctor Will See You Now,” “Your Future Doctor May Not Be Human,” and “This AI Just Beat Human Doctors on a Clinical Exam.” 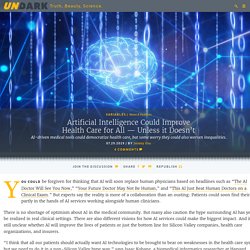 But experts say the reality is more of a collaboration than an ousting: Patients could soon find their lives partly in the hands of AI services working alongside human clinicians. “In the same way that technologies can close disparities, they can exacerbate disparities.” There is no shortage of optimism about AI in the medical community.

But many also caution the hype surrounding AI has yet to be realized in real clinical settings. There are also different visions for how AI services could make the biggest impact. But critics point out that all that promise could vanish if the rush to implement AI tramples patient privacy rights, overlooks biases and limitations, or fails to deploy services in a way that improves health outcomes for most people. This AI-generated Joe Rogan fake has to be heard to be believed. Artificial intelligence isn’t just creating fake photos and videos — it can do fake voices, too. 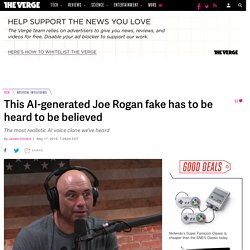 Up until now, these voices have been noticeably stilted and robotic, but researchers from AI startup Dessa have created what is by far the most convincing voice clone we’ve ever heard — perfectly mimicking the sound of MMA-commentator-turned-podcaster Joe Rogan. Listen to clips of Dessa’s AI Rogan below, or take a quiz on the company’s site to see if you can spot the difference between real Rogan and faux Rogan. (It’s surprisingly hard! ) In terms of making a convincing fake, Dessa chose its target well. It doesn’t hurt that the company’s engineers are obviously familiar with Rogan’s favorite talking points. But of course, being able to convincingly fake someone’s voice has disturbing implications, too. “Clearly, the societal implications for technologies like speech synthesis are massive,” Dessa writes. The company notes there are benefits as well. Leisure Is Our Killer App. The capacity to let our minds wander can give humans a surprising edge against advancing technologies in the battle for jobs. MIT SMR Frontiers This article is part of an MIT SMR initiative exploring how technology is reshaping the practice of management. Depending on which forecasts you believe, we should be either moderately concerned or extremely concerned about robots taking our jobs in the near future. From truck drivers to lawyers to those designing the robots themselves, nobody is safe from being replaced by software, algorithms, and machines. Now that we are face-to-face (or face-to-screen) with that threat, an entire cottage industry has emerged around dispensing advice on how to prepare for it.

What skills are needed to avoid being automated out of a job? Forget about artificial intelligence, extended intelligence is the future. How AI will revolutionize the way video games are developed and played. If you asked video game fans what an idealized, not-yet-possible piece of interactive entertainment might look like in 10 or even 20 years from now, they might describe something eerily similar to the software featured in Orson Scott Card’s sci-fi classic Ender’s Game. 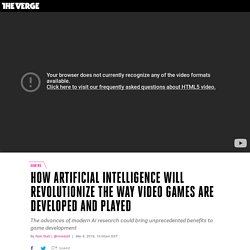 In his novel, Card imagined a military-grade simulation anchored by an advanced, inscrutable artificial intelligence. The Mind Game, as it’s called, is designed primarily to gauge the psychological state of young recruits, and it often presents its players with impossible situations to test their mental fortitude in the face of inescapable defeat. Yet the game is also endlessly procedural, generating environments and situations on the fly, and allows players to perform any action in a virtual world that they could in the real one. The AI boom is happening all over the world, and it’s accelerating quickly. The rate of progress in the field of artificial intelligence is one of the most hotly contested aspects of the ongoing boom in teaching computers and robots how to see the world, make sense of it, and eventually perform complex tasks both in the physical realm and the virtual one. 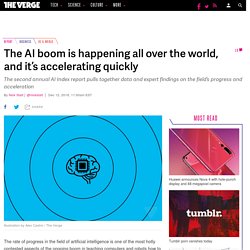 And just how fast the industry is moving, and to what end, is typically measured not just by actual product advancements and research milestones, but also by the prognostications and voiced concerns of AI leaders, futurists, academics, economists, and policymakers. AI is going to change the world — but how and when are still open questions. Today, findings from a group of experts were published in an ongoing effort to help answer those questions. Artificial Intelligence and the Future of Humans. Experts say the rise of artificial intelligence will make most people better off over the next decade, but many have concerns about how advances in AI will affect what it means to be human, to be productive and to exercise free will Digital life is augmenting human capacities and disrupting eons-old human activities. 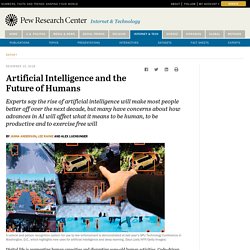 Code-driven systems have spread to more than half of the world’s inhabitants in ambient information and connectivity, offering previously unimagined opportunities and unprecedented threats. As emerging algorithm-driven artificial intelligence (AI) continues to spread, will people be better off than they are today? Some 979 technology pioneers, innovators, developers, business and policy leaders, researchers and activists answered this question in a canvassing of experts conducted in the summer of 2018.