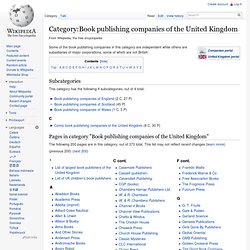 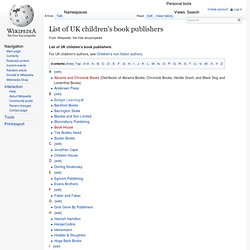 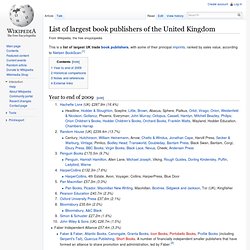 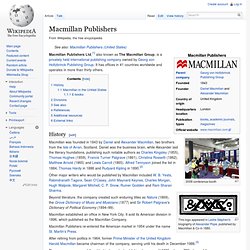 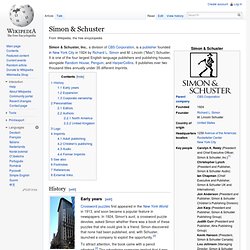 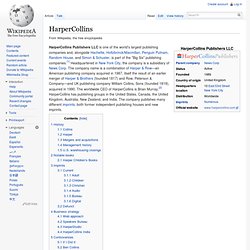 Egmont Group Site - We bring stories to life. Egmont Group. The Egmont Group is a media corporation founded and rooted in Copenhagen, Denmark. 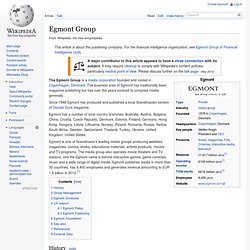 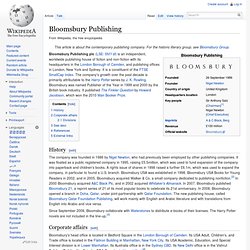 It is a constituent of the FTSE SmallCap Index. The company's growth over the past decade is primarily attributable to the Harry Potter series by J. K. Rowling. Bloomsbury was named Publisher of the Year in 1999 and 2000 by the British book industry. History[edit] The company was founded in 1986 by Nigel Newton, who had previously been employed by other publishing companies. Since September 2008, Bloomsbury collaborate with Waterstones to distribute e-books of their licenses. Publishing: careers. If you would like to know more about the different roles in the publishing industry, which will tell you more. 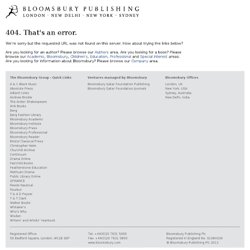 You can view videos of staff describing how their job impacts on the publishing process . Our head office is housed in a beautiful Georgian Square and we are looking for someone to join our facilities team, working both as Front of House Host and behind the scenes in facilities administration. The hours for this role are 8.30am - 5.00pm Front of House: • Greet and welcome staff and visitors as they arrive for the day or for meetings and inform the relevant member of staff of their visitor’s arrival. Journals, books, and online products and services. Careers. John Wiley & Sons, Inc., is a leading global publisher providing must-have content and services for the academic, professional, scientific, technical, medical, scholarly and consumer markets. 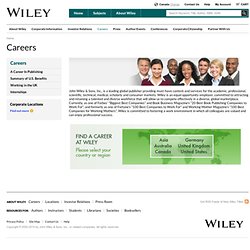 Wiley is an equal opportunity employer, committed to attracting and retaining a talented and diverse workforce that will allow us to compete effectively in a diverse, global marketplace. Currently, as one of Forbes' "Biggest Best Companies" and Book Business Magazine's "20 Best Book Publishing Companies to Work For", and formerly as one of Fortune's "100 Best Companies to Work For" and Working Mother Magazine's "100 Best Companies for Working Mothers", Wiley is committed to fostering a work environment in which all colleagues are valued and can enjoy professional success. John Wiley & Sons. John Wiley & Sons, Inc., also referred to as Wiley, (NYSE: JWA) is a global publishing company that specializes in academic publishing and markets its products to professionals and consumers, students and instructors in higher education, and researchers and practitioners in scientific, technical, medical, and scholarly fields.

Pearson is part of Pearson PLC, which also owns Penguin Books and the Financial Times. It was created in 1998 when Pearson PLC purchased the education division of Simon & Schuster from Viacom and merged it with its own education division, Addison-Wesley Longman to form Pearson Education. Pearson Education was rebranded to Pearson in 2011, and split into an International and a North American division. Though Pearson generates approximately 60% of its sales in North America, they operate in more than 70 countries.

Imprints[edit] Pearson has a number of publishing imprints: Partnerships[edit] "Pineapple-Gate"[edit] Penguin Books - Find the perfect book, ebook or audio book and get reading today. Jobs with Penguin - Penguin Books Ltd. At Penguin the opportunities for employment are wide-ranging and extend into almost every aspect of publishing. Here, we will look in more detail at specific departments and show how each area, in its different way, contributes to the publishing of many wonderful books at Penguin. Please click here to view our Working in Publishing booklet. Pearson Diversity Summer Internship Programme: Penguin Books. Penguin Books is now an imprint of the worldwide Penguin Random House, a newly emerging conglomerate which was formed in 2012 by the merger of the two publishers.[5] Formerly Penguin Group was wholly owned by Pearson PLC, the global media company which also own the Financial Times,[6] but it now retains only a minority holding of 47% of the stock against Random House owner Bertelsmann who controls the majority stake.

United Kingdom. FAQs. You are here: Home > FAQs Do I have to apply using the online application system? Yes, all applications need to be received this way due to the need to capture key data for reporting and monitoring purposes. It also ensures we have all your relevant contact information. How long will completion of the online form take? Once you have prepared your CV and cover letter, the online application will take approximately 10 to 15 minutes to complete. Can I apply for more than one position?

Providing you meet the required criteria of the role (as stated in the advert), we are happy for you to apply for more than one position. Can I apply for a post if I have been unsuccessful in a previous application? Each vacancy is assessed separately so we are happy for you to apply for other positions if you meet the relevant criteria. When can I expect to hear about the status of my application and how will I be notified? It can take up to 3 weeks from the closing date for us to contact you. Oxford University Press. Random House - Bringing you the best in fiction, nonfiction, and children's books. Random House.