Middle East Expert and Former White House Official Eric Pelofsky Joins The Washington Institute. LEADERSHIP – AIM. LEADERSHIP admin 2016-06-20T15:36:23+00:00 Our mission is to promote a standard of integrity and success for collegiate and professional sports organizations, thereby building and protecting the integrity of reputations and brands. 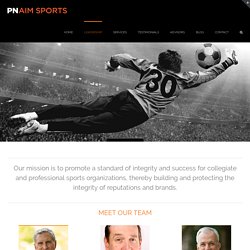 BILL CURRYCo-Founder & Chairman Bill Curry has spent most of his professional life in the trenches of our greatest team sport, football. A ten-year NFL veteran who performed on three world championship teams and served as President of the NFLPA, he understands the dynamics of sports all culture. Serving as head coach at Georgia Tech, Alabama, Kentucky, and Georgia State, he learned the subtleties of NCAA competition. Brad MacAfee is senior partner and Chief Executive Officer of Porter Novelli. JEFF BATTCHERCo-Founder & President Jeff Battcher calls on his extensive global corporate communications leadership to counsel senior executives on internal and external communications.

PETE WELLBORNCo-Founder & General Counsel KIRSTEN TULLISSr. JULIA HEMINGWAYSr. Behind the Headlines With Greg Jawski. Crises can strike at any time. 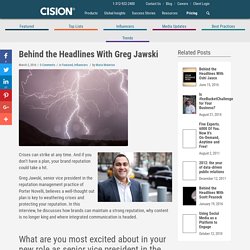 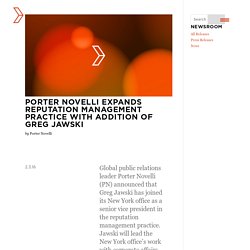 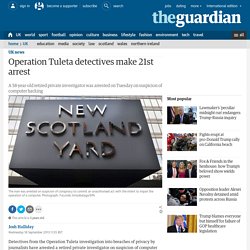 Kuwait 'only functioning democracy' in Gulf. DAVOS 2017: Trump 'could hit the ball out of the park' INJAZ-KUWAIT.ORG. Chairman of Gulf Bank and CEO of Alghanim Industries. Executive Profile. Kuwait tycoon claims brother paid hackers to leak emails - Culture & Society. A Kuwaiti billionaire has claimed his brother paid private investigators to hack into his email account and publish private emails containing details of his personal finances and legal affairs, it has been reported. 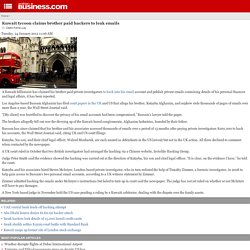 Los Angeles-based Bassam Alghanim has filed court papers in the UK and US that allege his brother, Kutayba Alghanim, and nephew stole thousands of pages of emails over more than a year, the Wall Street Journal said. “[My client] was horrified to discover the privacy of his email accounts had been compromised,” Bassam’s lawyer told the paper. The brothers allegedly fell out over the divvying up of the Kuwait-based conglomerate, Alghanim Industries, founded by their father.

Bassam has since claimed that his brother and his associates accessed thousands of emails over a period of 13 months after paying private investigators $200,000 to hack his accounts, the Wall Street Journal said, citing UK and US court filings. Khair Al-Kuwait honors Kutayba Alghanim - For his contribution to renovating Children's Home. Kutayba Alghanim is pictured with Khair Al-Kuwait representatives. 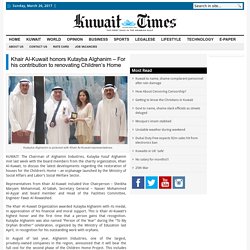 KUWAIT: The Chairman of Alghanim Industries, Kutayba Yusuf Alghanim met last week with the board members from the charity organization, Khair Al-Kuwait, to discuss the latest developments regarding the restoration of houses for the Children’s Home – an orphanage launched by the Ministry of Social Affairs and Labor’s Social Welfare Sector. Representatives from Khair Al-Kuwait included Vice Chairperson – Sheikha Maryam Mohammad, Al-Sabah, Secretary General – Nasser Mohammed Al-Ayyar and board member and Head of the Facilities Committee, Engineer Fawzi Al-Rowaished. Diversifying Our Workforce. Today I am sharing an article that originally appeared in an Alghanim Industries publication, Together, which is distributed twice a year to our 14,000 employees. 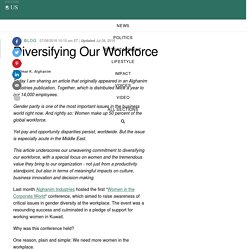 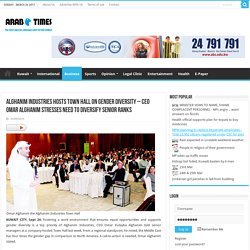 From a regional standpoint, he noted, the Middle East has four times the gender gap in comparison to North America. 51 Powerful Middle-Eastern Businessmen You Should Know. The Arab world is heating up with new job opportunities and economic growth fueled by the area's growing legion of powerful businessmen. 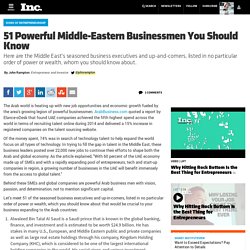 ArabBusiness.com quoted a report by Elance-oDesk that found UAE companies achieved the fifth highest spend across the world in terms of recruiting talent online during 2014 and delivered a 15% increase in registered companies on the talent sourcing website. Of the money spent, 74% was in search of technology talent to help expand the world focus on all types of technology. In trying to fill the gap in talent in the Middle East, these business leaders posted over 22,000 new jobs to continue their efforts to shape both the Arab and global economy. Welcome to Alghanim Industries, Kuwait. Forecast 2015: Omar K Alghanim - Industries. As we head into a brand-new year, the headlines are awash in news about our twin heartbreaks here in the Middle East. 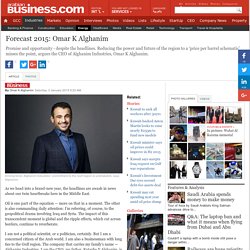 Oil is one part of the equation — more on that in a moment. The other is also commanding daily attention: I’m referring, of course, to the geopolitical drama involving Iraq and Syria. The impact of this transcendent moment is global and the ripple effects, which cut across borders, continue to reverberate. I am not a political scientist, or a politician, certainly. But I am a concerned citizen of the Arab world. Looking ahead, here’s what I predict: The next 12 months will be rich with promise and opportunity, particularly for those who invest smartly and stay the course. I offer this prognosis with full knowledge that oil, now trading near a four-year low, is having a profound impact on our region.

Exclusive: Inside the mind of Omar Alghanim - Industries. Once Omar Kutayba Alghanim gets going, he’s hard to stop. Over a two-hour interview at his chalet with incredible views of the Arabian Gulf, the chief executive of one of the Middle East’s largest and most closely held family firms is in a candid mood. Whether it’s dealing with the region’s youth bulge, the lack of bankruptcy laws or the impact of the oil price, Alghanim has a ready answer. “I’ve always been driven,” he says, simply. “That’s thanks to my father and the way he raised me. I’m close to my father and my grandfather, and working for this business is something that always had a deeper call. Alghanim v alghanim. More Turmoil in Porter Novelli's C-Suite. Anthony Viceroy, global president and chief financial officer at Porter Novelli, is leaving the Omnicom PR firm after spending nearly four years in the role and a decade at the holding company, people familiar with the matter told Ad Age .

Both Mr. Viceroy declined to comment, and representatives for Porter Novelli could not be immediately reached. Mr.