The Venus Project/Zeitgeist Movement. 3.5/5 ( 70% )based on 2 ratings Why don’t you put a creative crew together with science fiction writers to write books, short stories, and scripts about stories you envision relating to what life would be like in a Venus city? 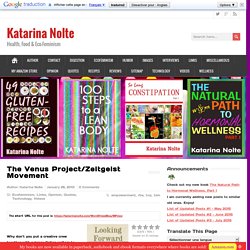 Perhaps focusing on the state of mind of people in such a world, their stories, etc. contrasting present ones where a good story has to have conflict, as well as stories in which on one side you have the ‘blissful’ people and on the other the naysayer trying to ruin that new world. In addition to books you could have cartoons and science fiction movies made by younger people (students, etc.) who may be more inclined to envision alternative lifestyles. Combined, this would give people the opportunity to see what it would be like even though it is highly unlikely that anything like it will be reality in our lifetimes. Except perhaps in places like Saudi Arabia where anything resembling social advancement is simply not going to happen.

Facebook. Money Free Party sur Twitter : "#RBE #resourcebasedeconomy #BeFree #join us to put the #world on its #best #path #MFP #TVP #TZM. Welcome to The Mars Project. Captains Of Spaceship Earth. Jacque Fresco - All Decisions Forced by Background - Sept 16, 1974. Resource Based Economy Demonstration. The Choice is Ours (2015) Parts I & II - 27 language subtitles. Economic Calculation in a Natural Law / RBE, Peter Joseph, The Zeitgeist Movement, Berlin. Future My Love. We are LIVE here every Saturday and Wednesday @ 8PM. The Venus Project. Chips that mimic the brain. Photograph and layout of a multi-neuron chip comprising an array of analog/digital silicon neurons and synapse circuits, that can reproduce biophysically realistic neural response properties and dynamics... more » in real-time. 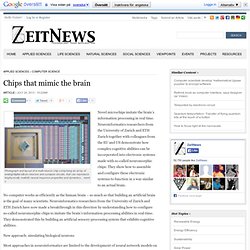 The chip was produced using a standard 0.35μm CMOS technology and it occupies an area of 10 square mm. It has 128 neuron circuits and 5120 synapse circuits. The neurons are connected to form a winner-take-all network, and the synapses implement realistic temporal dynamics as well as spike-timing dependent plasticity learning mechanisms. (Credit: University of Zurich) « less Novel microchips imitate the brain’s information processing in real time. No computer works as efficiently as the human brain – so much so that building an artificial brain is the goal of many scientists. New approach: simulating biological neurons. Unusual Material Expands Dramatically Under Pressure. If you squeeze a normal object in all directions, it shrinks in all directions. 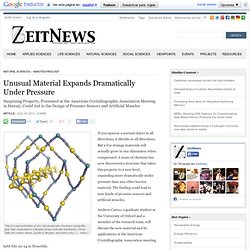 But a few strange materials will actually grow in one dimension when compressed. A team of chemists has now discovered a structure that takes this property to a new level, expanding more dramatically under pressure than any other known material. The finding could lead to new kinds of pressure sensors and artificial muscles. Andrew Cairns, a graduate student at the University of Oxford and a member of the research team, will discuss the new material and its applications at the American Crystallographic Association meeting held July 20-24 in Honolulu. Negative linear compression, or NLC, has existed for millions of years; in fact, biologists believe octopi and squid use the phenomenon to make their muscles contract. The material the research team discovered, zinc dicyanoaurate, does just that. Zinc dicyanoaurate’s unique properties make it promising for several applications. Researchers Build 3-D Structures Out of Liquid Metal. “It’s difficult to create structures out of liquids, because liquids want to bead up. 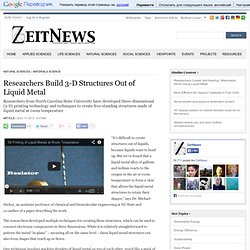 But we’ve found that a liquid metal alloy of gallium and indium reacts to the oxygen in the air at room temperature to form a ‘skin’ that allows the liquid metal structures to retain their shapes,” says Dr. Michael Dickey, an assistant professor of chemical and biomolecular engineering at NC State and co-author of a paper describing the work. The researchers developed multiple techniques for creating these structures, which can be used to connect electronic components in three dimensions. ABB announces plan to build world's largest network of EV fast-charging stations. ABB, the leading power and automation technology group, announced today that it has been selected by Fastned to supply chargers to more than 200 electric vehicle fast-charging stations in the Netherlands, bringing an EV fast charger within 50 kilometers of all of the country’s 16.7 million inhabitants. 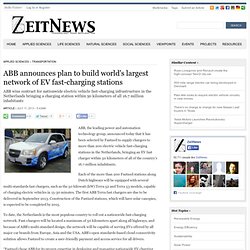 Each of the more than 200 Fastned stations along Dutch highways will be equipped with several multi-standards fast chargers, such as the 50 kilowatt (kW) Terra 52 and Terra 53 models, capable of charging electric vehicles in 15-30 minutes. Researchers build an all-optical transistor. Optical computing — using light rather than electricity to perform calculations — could pay dividends for both conventional computers and quantum computers, largely hypothetical devices that could perform some types of computations exponentially faster than classical computers. 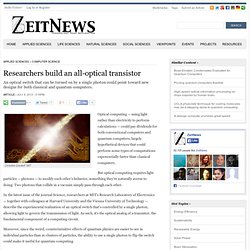 But optical computing requires light particles — photons — to modify each other’s behavior, something they’re naturally averse to doing: Two photons that collide in a vacuum simply pass through each other. In the latest issue of the journal Science, researchers at MIT’s Research Laboratory of Electronics — together with colleagues at Harvard University and the Vienna University of Technology — describe the experimental realization of an optical switch that’s controlled by a single photon, allowing light to govern the transmission of light. Designing a Future Earth.

Image: csironewsblog.com What does the future hold for our Earth? 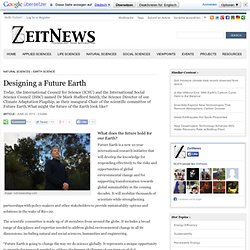 Future Earth is a new 10-year international research initiative that will develop the knowledge for responding effectively to the risks and opportunities of global environmental change and for supporting transformation towards global sustainability in the coming decades. It will mobilize thousands of scientists while strengthening partnerships with policy-makers and other stakeholders to provide sustainability options and solutions in the wake of Rio+20.

The scientific committee is made up of 18 members from around the globe. It includes a broad range of disciplines and expertise needed to address global environmental change in all its dimensions, including natural and social sciences, humanities and engineering. “Future Earth is going to change the way we do science globally. Nano-breakthrough: Solving the case of the herringbone crystal. Blueprints for Star Trek : RBE and TVP Basics. Uniting Humans NewsLetter. The Venus Project.