Remote access to hundreds of real Android and IOS devices using just a browser along with many tools for testing and debugging.

Test Local And Internal Servers Before Deployment Using Wildnet. Some testing teams set up their own staging environment to test internal servers but as there is no public access which makes it difficult to perform local testing on remote devices. 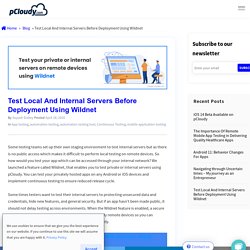 So how would you test your app which can be accessed through your internal network? We launched a feature called Wildnet, that enables you to test private or internal servers using pCloudy. You can test your privately hosted apps on any Android or iOS devices and implement continuous testing to ensure reduced release cycle. Some times testers want to test their internal servers to protecting unsecured data and credentials, hide new features, and general security. But if an app hasn’t been made public, it should not delay testing across environments. Prerequisite: User should be registered on pCloudy platform Executables can be downloaded from below links Linux : Windows : OSX : Manual Process to enable Wildnet 1.

Note: User will get authenticated as shown in the below screenshot. 5 Best Practices To Avoid Test Automation Failure. Automation testing forms the core of any CI/CD pipeline and enterprises are keen to practice test automation to enhance the efficiency of the development process. 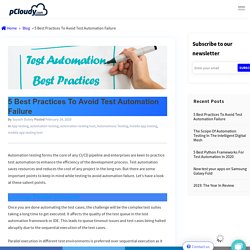 Test automation saves resources and reduces the cost of any project in the long run. But there are some important points to keep in mind while testing to avoid automation failure. Let’s have a look at these salient points. The Scope Of Automation Testing In The Intelligent Digital Mesh. Intelligent Digital Mesh is the entwining of people, devices, content, and services enabled by digital models, business platforms and a rich, intelligent set of services to support digital business. 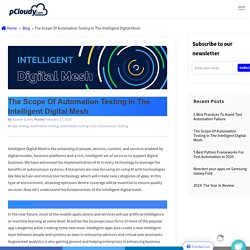 We have witnessed the implementation of AI in every technology to leverage the benefits of autonomous systems. Enterprises are now focusing on using AI with technologies like blockchain and immersive technology which will create new categories of apps. In this type of environment, attaining optimum device coverage will be essential to ensure quality services. Now let’s understand the fundamentals of the intelligent digital mesh. In the near future, most of the mobile applications and services will use artificial intelligence or machine learning at some level. Source: Gartner.com Digital When we talk about digital, we mean digital twins, cloud to the edge, conversational platforms, and Immersive Experience. Mesh. 5 Best Python Frameworks For Test Automation In 2020. Testing framework plays a crucial role in the success of any automated testing process. 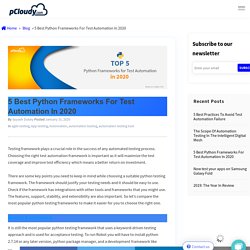 Choosing the right test automation framework is important as it will maximize the test coverage and improve test efficiency which means a better return on investment. There are some key points you need to keep in mind while choosing a suitable python testing framework. The framework should justify your testing needs and it should be easy to use.

Check if the framework has integrations with other tools and frameworks that you might use. The features, support, stability, and extensibility are also important. It is still the most popular python testing framework that uses a keyword-driven testing approach and is used for acceptance testing. OpensourcePlatform independentNo need to learn a programming language to write Robot Framework test casesAutomatic report generation after executing each builtSupports behavior-driven, data-driven and keyword-driven approachesEasy installation Disadvantages. Functional Testing Vs Non-Functional Testing. According to a report, app crashes cause 71% of uninstalls. 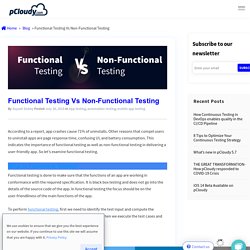 Other reasons that compel users to uninstall apps are page response time, confusing UI, and battery consumption. This indicates the importance of functional testing as well as non-functional testing in delivering a user-friendly app. So let’s examine functional testing. Functional testing is done to make sure that the functions of an app are working in conformance with the required specification. It is black box testing and does not go into the details of the source code of the app. Functional Testing Types Let’s have a look at types of functional testing for mobile applications. Unit TestingIntegration TestingSanity TestingSmoke TestingRegression TestingSystem TestingBeta/User Acceptance Testing. 5 Benefits of Parallel Testing - pCloudy. These days software firms are putting in a lot of effort to attain quality at speed. 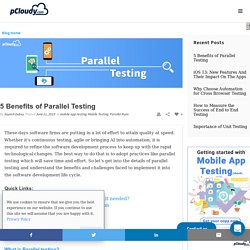 Whether it’s continuous testing, agile or bringing AI into automation, it is required to refine the software development process to keep up with the rapid technological changes. The Role of Artificial Intelligence in Transforming DevOps - pCloudy. Mobile Responsive Test across range of Mobile Devices and platforms. Problems with Online Android Emulator and how to solve it? Android now occupies the number one place in the world Smartphone arena with a market share of 87% at the end of 2016 that means 9 out of 10 Smartphones in the world run on Android. With such dominance in the space, the creation of mobile apps has reached never before heights.

But the constant innovation that fuels this market has major problems in terms of the development and testing timelines. Running an online Android emulator, which used to be a solution once up a time, is not good enough anymore. So what can companies and developers do to stay ahead in the development race? What alternates exist to improve your app’s usability, performance and customer satisfaction? 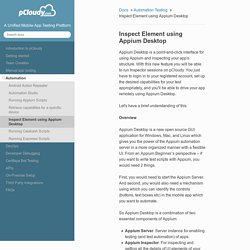 With this new feature you will be able to run Inspector sessions on pCloudy. You just have to login in to your registered account, set up the desired capabilities for your test appropriately, and you'll be able to drive your app remotely using Appium Desktop. Let's have a brief understanding of this Overview Appium Desktop is a new open source GUI application for Windows, Mac, and Linux which gives you the power of the Appium automation server in a more organized manner with a flexible UI. 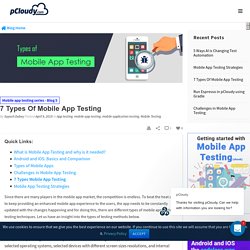 Mobile App Testing Strategies - pCloudy. Quick Links: In the year 2020, there will be around 5.5 Billion mobile users which accounts for 70% of the world population. 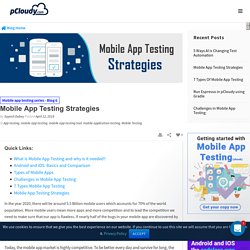 More mobile users mean more apps and more competition and to lead the competition we need to make sure that our app is flawless. 5 Ways AI is Changing Test Automation - pCloudy. Software testing has evolved a lot since the time when the waterfall model was used. 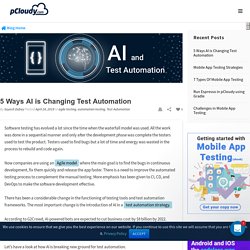 All the work was done in a sequential manner and only after the development phase was complete the testers used to test the product. Testers used to find bugs but a lot of time and energy was wasted in the process to rebuild and code again. Now companies are using an Agile model where the main goal is to find the bugs in continuous development, fix them quickly and release the app faster. pCloudy 4.6 - Get the most out of our Biggest Update Ever!! We have always believed that product enhancements need to reach the customer as quickly as possible. Their feedback is the most important part of the product evolution journey.

So, we can’t wait to unveil what we have created in the last few months. We have upgraded it with 11 new features which makes this as one of the biggest product update ever for us. Audio Test and Voice Test Commands on pCloudy Devices. Now a day’s many apps can be operated by using voice commands. For example Google voice search , Evernote voice / audio note etc., Now you can send voice command to pCloudy devices while testing such apps Below are the steps to perform audio command testing. 1) Upload the audio file which is having audio command (like .mp3, .wav etc.,) in MyApp/Data by clicking upload button Note: if you don’t have audio file you can use the below mentioned website to generate sample audio files. url: 2) Install any Android /iOS application in device which is enabled voice search feature. 3) Open the application and click on search field and then click on microphone symbol.

Automated Testing Using Espresso - pCloudy. Now you can run your Espresso Scripts on hundreds of Mobile devices over pCloudy.com. Espresso is a testing framework for Android apps. The platform allows you to write concise and reliable Android UI tests. pCloudy.com provides you the platform to run these scripts on multiple mobile devices of your choice. Here are the steps for running your Test Scripts on multiple Android Devices: Login over www.pcloudy.com with your registered Email ID & Password.Choose Instrumentation Type based on your Test Scripts you’ve written. pCloudy provides support for Instrumentation Type (InstrumentationTestRunner, AndroidJUnitRunner) for Android. Monitoring App Performance - pCloudy. Mobile application testing does not stop when all the functional tests pass. Testing the performance of your mobile application is a critical step before releasing it. pCloudy helps you with performance profiling of your mobile apps.

You can view the CPU usage, Memory usage, Data usage and Battery consumption while performing a series of actions on the app. The Real time app performance monitoring feature helps you to keep track of the app’s performance while conducting manual tests. You can even check the performance consistency of the app by running automation test suites in parallel on multiple devices and by also simulating different network environments. App Performance while conducting Manual Tests. Automate functional testing of your apps on multiple devices with pCloudy. Ensure the best experience for your app from users across the world with our location testing feature.