The Paycheck Warriors at Barkan Meizlish, LLP are Wage & Hour attorneys with a focus on wage theft, FLSA violations, and employment law.

How Can I File a Wage and Hour Class Action Lawsuit in Ohio? Are you an Ohio employee who feels like you’ve been paid unfairly when it comes to your wages and hours? 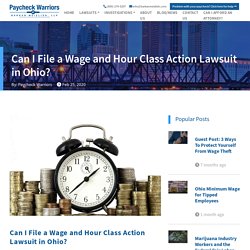 Few Ohio citizens know that employers who refuse to pay their employees for the time they work, or do not pay them the right amount for the hours they’ve worked, are violating the law. Is Working Off the Clock Illegal for Employees in Ohio? The laws regarding working off the clock in Ohio can get a bit murky. 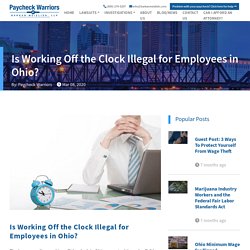 FLSA laws regarding overtime work depends on if you’re considered an “exempt” employee and receive an annual salary or if you’re “non-exempt” and get paid hourly. Working overtime when you’re exempt is completely legal and your employer is not expected to compensate you for any time you spend working outside of the normal workday. And, while the act of a non-exempt employee working overtime is not illegal, employers refusing to pay them for extra hours is against the law. Can Employer Be Sued For Not Paying Me On Time? Workers in the U.S. are protected by both state wage laws and federal wage laws including the Fair Labor Standards Act (“FLSA”). 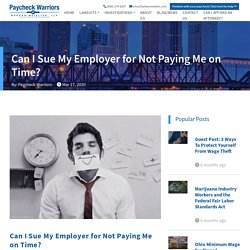 These laws protect many facets of employment, with the most important being compensation. Both state and federal law require that employees be compensated for the work they perform at standards set by the federal and state governments. However, sometimes employers try to withhold money from paychecks, fail to administer paychecks, and don’t issue paychecks on time. In these cases, workers may wonder if there are legal consequences of not paying employees on time. Withholding or refusing to give paychecks is most likely against both state and federal law, regardless of where you live. Wage and Hour Lawsuit Settlements for Employees Recovers Millions. Workers spend up to 40 hours a week putting in time to earn a paycheck, but often times employers take advantage of them and commit the crime of wage theft. 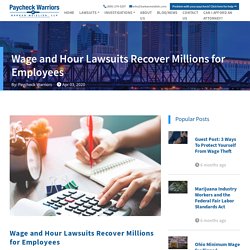 Wage theft happens when a company refuses to pay workers for overtime, requires them to work off the clock without compensation, or does not pay for job-related duties on or off the clock. Ohio Minimum Wage for Tipped Employees - PayCheck Warriors. Tipped employees are covered by both state and federal minimum wage law in Ohio. 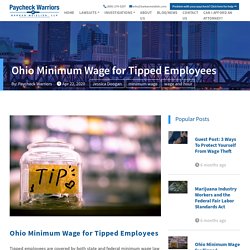 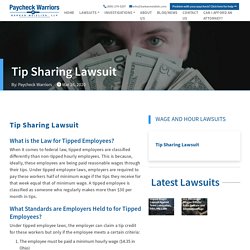 When it comes to federal law, tipped employees are classified differently than non-tipped hourly employees. This is because, ideally, these employees are being paid reasonable wages through their tips. Under tipped employee laws, employers are required to pay these workers half of minimum wage if the tips they receive for that week equal that of minimum wage. A tipped employee is classified as someone who regularly makes more than $30 per month in tips. What Standards are Employers Held to for Tipped Employees? Under tipped employee laws, the employer can claim a tip credit for these workers but only if the employee meets a certain criteria: The employee must be paid a minimum hourly wage ($4.35 in Ohio)The employee must claim at least the amount needed to equal standard minimum wage ($4.35 per hour to equal $8.70 in Ohio)All employees should be notified of tip credit criteria Tipping Pools Problems with Tip Sharing &Tip Sharing Lawsuits. Distribution and Manufacturing Investigation in Columbus, Ohio.

When Production is King, Manufacturing and Distribution Employees May Become the Jester. 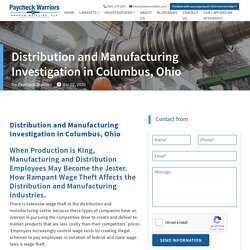 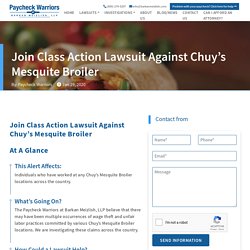 The 55 employees affected by these abuses against the Fair Labor and Standards Act will receive back pay for their lost wages pursuant to this settlement. The case has raised awareness and questions of whether these illegal pay practices were occurring at Chuy’s Mesquite Broiler locations across the country. The basis of the Arizona case was that employees were being paid cash or separate checks for straight-time instead of the legally required overtime payments.

Class Action Lawsuit Against Ohio Gorematory. While Halloween and the scary attractions associated with it may be months away, something sinister has been going on at the Ohio Gorematory. 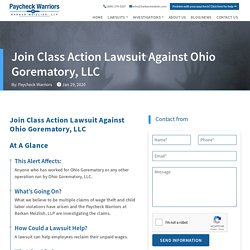 Workers are claiming that they were never paid the wages they earned during the 2019 and possibly previous seasons. Instead, Ohio Gorematory refused to pay wages to workers at their Ohio haunted attraction, telling workers that unless a certain number of shifts were worked, workers were owed nothing- in blatant violation of both State of Ohio and Federal Law. Even more disturbing than the gory scenes within the Ohio Gorematory, is the fact that many of these workers were minors- teenagers from local schools looking for a way to earn some money with friends.

At least one minor worker is claiming to have worked seventeen (17) nights and received no pay, a violation that was likely widespread throughout the operation of the Ohio Gorematory, is in direct violation of her agreement, and is in violation of Ohio Child Labor Laws. Wage Theft Investigations Against Popeye’s Louisiana Kitchens.

All for a Sandwich?! 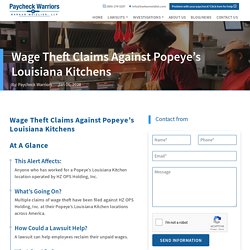 Overworked and Underpaid—How a Texas Popeye’s Franchise Owner is robbing employees across America and subjecting employees to unfair labor practices Popeye’s Louisiana Kitchen has been in the spotlight for the last several months—but not for the reason you’d think. With the unpreceded success of their chicken sandwich, re-introduced to the menu in November 2019, media has been buzzing with Popeye’s talk. However, something far more sinister has been brewing beneath the surface. Claims of wage theft and unfair labor practices in multiple states have been filed against HZ OPS Holding, Inc., a franchise with Popeye’s locations across the United States.

The updated complaint expands the suit to include employees in the manufacturing and customer service departments, and names the owners as Defendants. The complaint alleges Rogue Fitness failed to pay their non-exempt employees overtime in violation of the Federal Labor Standards Act of 1938 (“FLSA”), 29 U.S.C. §§201, et seq., The Ohio Minimum Fair Wage Standards Act [“the Ohio Wage Act”], O.R.C. §§4111.01., 4111.03 and 4111.10, and the Ohio Prompt Pay Act [“the OPPA”]. Plaintiffs’ Attorney, Robert E. Learn How To Fill a Wage and Hour Lawsuit? Do you feel like you’ve been treated unfairly by your employer when it comes to your hours and wages?

Workers who feel that have worked overtime without pay, haven’t been given proper breaks, or were forced to work off the clock can earn compensation by filing a wage and hour lawsuit.