Ember Engines. While a lot of developers may have heard the term "Engine", there is often a lot of unfamiliarity with what that term actually means. 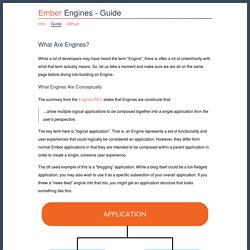 So, let us take a moment and make sure we are all on the same page before diving into building an Engine. What Engines Are Conceptually The summary from the Engines RFC states that Engines are constructs that: …allow multiple logical applications to be composed together into a single application from the user’s perspective. The key term here is "logical application". The oft used example of this is a “blogging” application. Even though the application has sets of functionality represented by Engines, there is room for some additional functionality that the host application itself provides. How Engines Differ From Applications Now that we can understand what Engines represent conceptually (that is, “logical applications”), let’s talk about the concrete differences between Applications and Engines. Is Your Ember App Too Big? Split It Up with Ember Engines. The Ember team has does an excellent job giving proper names to most their components, tools and libraries. 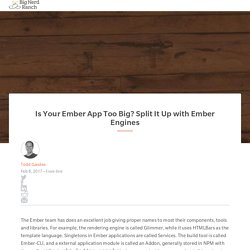 For example, the rendering engine is called Glimmer, while it uses HTMLBars as the template language. Singletons in Ember applications are called Services. The build tool is called Ember-CLI, and a external application module is called an Addon, generally stored in NPM with the prefix ember-cli-[addon-name]. Having recognizable names makes talking about them a lot easier. This is very intentional for the community. The Ember Engines RFC started in October 2014 and was merged in April 2016. Engines and the flow to setup Engines were added to Ember fairly early in the Engines-RFC process.

For applications that have sections with different business concerns, engines provide a structure for scaling without the threat of exponential file size growth. Is Your Ember App Too Big? Split It Up with Ember Engines. Ember.js Talks on EmberWatch. Ember.js — Goodbye MVC (Part 1) – The Ember Way. In the DDAU pattern, data flows one-way and there are no two-way bindings. 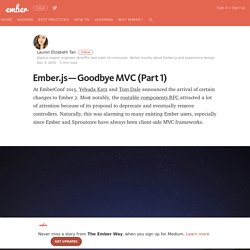 Different parts of your application can remain highly decoupled and predictable, which means you will always know the source of an object’s change. If you’ve read my post on functional programming and the observer effect, you’ll understand why it’s important to keep your components free from side effects. Instead of spending time cobbling together your own makeshift framework with a dozen micro-libraries and bike-shedding on the best way to implement a feature, using Ember means instant productivity and quick developer on-boarding.

Combined with the DDAU pattern and the Glimmer rendering engine, Ember developers have both productivity and performance out of the box. Preparing your application for DDAU When routable components land, controllers will be deprecated and removed. Since Ember components aren’t singletons, they will be torn down and re-rendered in an optimized fashion when Glimmer deems necessary. Lauren. Ember Data: A Tutorial and Examples of the Ember.js Data Library. Ember Data (a.k.a ember-data or ember.data) is a library for robustly managing model data in Ember.js applications. 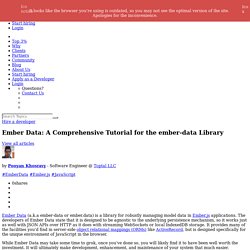 The developers of Ember Data state that it is designed to be agnostic to the underlying persistence mechanism, so it works just as well with JSON APIs over HTTP as it does with streaming WebSockets or local IndexedDB storage. It provides many of the facilities you’d find in server-side object relational mappings (ORMs) like ActiveRecord, but is designed specifically for the unique environment of JavaScript in the browser. While Ember Data may take some time to grok, once you’ve done so, you will likely find it to have been well worth the investment. It will ultimately make development, enhancement, and maintenance of your system that much easier. The Top Mistakes Developers Make Using Ember & Rails. Multiple apps under one ember-cli project - Ember CLI - Ember.JS. What scripts do I need to get started with Ember without ember-cli? - Ember.JS. (apologies for rezzing this thred) As much as I have come to love Ember CLI I think this is a valid question that the Ember community needs to be ready to hear more of. 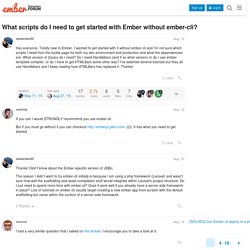 Deploy seems to cover the case of where the Ember app is still kind of a silo served up from some random directory/route on the server. That's fine, but some projects will require more integration (as has been mentioned) such as the file being served by a server-side view engine with some config or initial state (as a for instance).

That is not too terribly to figure out by hand, but the real problem is integrating into an existing CI setup. A lot of our clients, for instance, use a team-city => octopus deploy pipeline which can be a bit finicky for .NET projects because you need to be able to have all the things referenced in your project file. Ember.js - Multiple "apps" with ember-cli. Untitled. This is a guest post by Diego Poza. 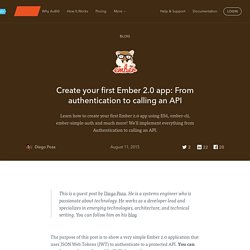 He is a systems engineer who is passionate about technology. He works as a developer lead and specializes in emerging technologies, architecture, and technical writing. You can follow him on his blog The purpose of this post is to show a very simple Ember 2.0 application that uses JSON Web Tokens (JWT) to authenticate to a protected API. You can get the sample app from this GitHub repository.