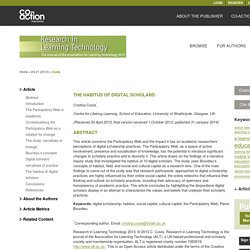 The Participatory Web, as a space of active involvement, presence and socialisation of knowledge, has the potential to introduce significant changes to scholarly practice and to diversify it. This article draws on the findings of a narrative inquiry study that investigated the habitus of 10 digital scholars. Keywords: digital scholarship; habitus; social capital; cultural capital; the Participatory Web; Pierre Bourdieu *Corresponding author. Research in Learning Technology 2013. © 2013 C. Citation: Research in Learning Technology 2013, 21: 21274 - Figure 1. Figure 1 presents the three main features of digital scholarship practices. Habitus. 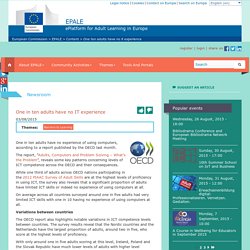 The report, “Adults, Computers and Problem Solving – What’s the Problem”, reveals some key patterns concerning levels of ICT competence across the OECD and their consequences. While one third of adults across OECD nations participating in the 2012 PIAAC Survey of Adult Skills are at the highest levels of proficiency in using ICT, the survey also reveals that a significant proportion of adults have limited ICT skills or indeed no experience of using computers at all.

On average across all countries surveyed around one in five adults had very limited ICT skills with one in 10 having no experience of using computers at all. Variations between countries The OECD report also highlights notable variations in ICT competence levels between countries. For Poland and the Slovak Republic meanwhile the equivalent proportions are only around three in five, and two in five respectively. DabbaughPLE.pdf. Praktijkonderzoek. Media theory. Exploring online research methods - Incorporating TRI-ORM. DISENTANGLING PUBLIC SPACE: SOCIAL MEDIA AND INTERNET ACTIVISM_tierney.pdf. KANT AND THE MODERNITY OF THE ABSENT PUBLIC jarzombek.pdf. Scraping the Social? Issues in live social research Marres_Weltevrede.pdf. The redistribution of methods: on intervention in digital social research, broadly conceived Marres.pdf. The development of social science research methods influenced by social media.

Experimental collaborations: An invocation for the redistribution of social research. Professional Social Networking Research. Social Media and Internet Research. Social Technology Data/Research. Education professionals as social innovators. By Dirk Van DammeHead of the Innovation and Measuring Progress division, Directorate for Education and Skills The famous French social scientist Emile Durkheim – the founding father of the academic discipline of sociology of education – grounded the view that by transmitting society and culture into the next generation, education was inevitably looking more to the past than to the future. 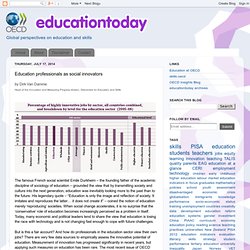 His legendary quote – “Education is only the image and reflection of society. It imitates and reproduces the latter… it does not create it” – coined the notion of education merely ‘reproducing’ societies. When social change accelerates, it is no surprise that the ‘conservative’ role of education becomes increasingly perceived as a problem in itself. Today, many economic and political leaders tend to share the view that education is losing the race with technology and is not changing fast enough to cope with future challenges. EU: Digital Literacies and eCompetence. The Definition Of Digital Literacy.

The Definition Of Digital Literacy by Terry Heick When we think of digital literacy, we usually think of research–finding, evaluating, and properly crediting digital sources. 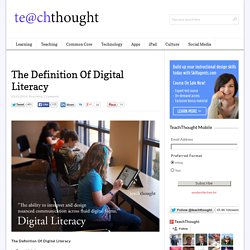 The “research” connotation makes sense, as it is the sheer volume of sources and media forms on the “internet” that stand out. But we are living in a world where the internet is disappearing, replaced by sheer connectivity. Are you “on the internet” when you tweet? As the internet dissolves into something more seamless–that no longer requires a clunky web browser to make itself visible–we might adjust our perspectives in parallel. Take the idea of “literacy,” for example.

Technology improves literacy only insofar as it improves a learner’s ability to identify, analyze, evaluate and create media. Media literacy. Supporting teaching, promoting digital literacy, transforming learning. Digital Literacy. Vier in balans Trendrapport MBO. New-Media Literacies. Being literate in a real-world sense means being able to read and write using the media forms of the day, whatever they may be. 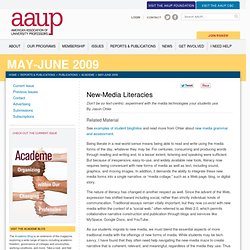 For centuries, consuming and producing words through reading and writing and, to a lesser extent, listening and speaking were sufficient. But because of inexpensive, easy-to-use, and widely available new tools, literacy now requires being conversant with new forms of media as well as text, including sound, graphics, and moving images. In addition, it demands the ability to integrate these new media forms into a single narrative, or “media collage,” such as a Web page, blog, or digital story.