Toward a New World Order in Eurasia - Fair Observer. Amid US airstrikes on Syria, the future of Eurasia is up for grabs. 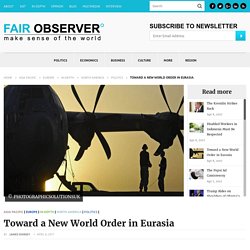 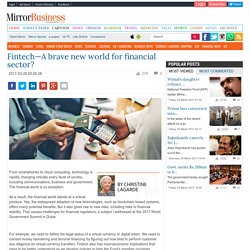 The financial world is no exception. As a result, the financial world stands at a critical juncture. Yes, the widespread adoption of new technologies, such as blockchain-based systems, offers many potential benefits. But it also gives rise to new risks, including risks to financial stability. That causes challenges for financial regulators, a subject I addressed at the 2017 World Government Summit in Dubai. Financial regime change: Donald Trump, trade and the new world order. TWO months into the Trump administration and we have had more sound and fury than concrete proposals about its economic agenda. 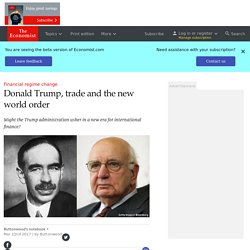 The most alarming sign so far is that America forced the G20 to drop a pledge about resisting “all forms of protectionism” from a joint statement but this may be purely symbolic. Nevertheless, Mr Trump’s determination to shake up the status quo may yet have global consequences. Brave new world. The dark world painted by George Orwell in his classic novel ‘1984’ has been with us for many years, notably after 9/11 when surveillance of private data by US intelligence agencies was stepped up. 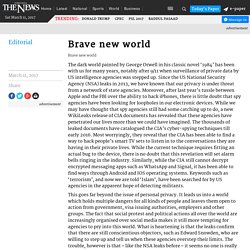 Since the US National Security Agency (NSA) leaks in 2013, we have known that our privacy is under threat from a network of state agencies. Trumpeting a global trade war. Sad! 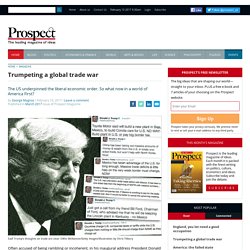 Trump’s thoughts on trade are clear ©Win McNamee/Getty Images/Illustration by Chris Tilbury Often accused of being rambling or incoherent, in his inaugural address President Donald Trump did—for better or worse—have something substantial to say. He summed it up in the two-word slogan, “America First.” To the uninitiated, this might have sounded like typical new-president waffle that might be forgotten as quickly as the “thousand points of light” of George HW Bush’s 1989 inaugural. Those who know their American history, however, were not so easily soothed. On their path to the top, many presidential candidates—Barack Obama and Bill Clinton included—have aired anxieties about trade, but they have tended to cool their rhetoric pretty quickly on assuming office. Soros Calls For A New World Order, Explains Why The USA Must End. The Epochal Battle Taking Place for the Future of the New World Order.

Commenting on the new era of international political and economic relations which is coming into focus with the arrival of Donald Trump, Kulikov explained that "the greatest fraud in the history of humanity," which includes the ideology of spreading democracy at gunpoint, resolving global crises through the emission of the dollar and the creation of debt pyramids, globalization and the desovereignization of all countries on the planet, "has reached the limits of its ability to reproduce itself. 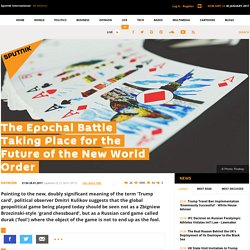 " The world, according to the commentator, is fast approaching the final match of a long and drawn-out geopolitical game, where "everything is at stake. " "Part of the global and American ruling class understands this, and has started this final match, making the first move with a literal 'trump card', electing Donald Trump as the president of the United States," Kulikov noted. "Before his election, he was simply a trump card. Audi can prosper in the industry's brave new world, Keogh says. Scott Keogh (file photo): "In the 21st century there is going to be a jump ball or a reset in the marketplace... 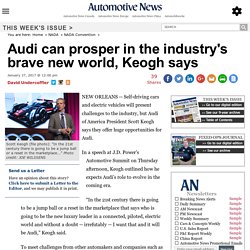 " Photo credit: JOE WILSSENS NEW ORLEANS -- Self-driving cars and electric vehicles will present challenges to the industry, but Audi of America President Scott Keogh says they offer huge opportunities for Audi. In a speech at J.D. Power’s Automotive Summit on Thursday afternoon, Keogh outlined how he expects Audi’s role to evolve in the coming era. “In the 21st century there is going to be a jump ball or a reset in the marketplace that says who is going to be the new luxury leader in a connected, piloted, electric world and without a doubt -- irrefutably -- I want that and it will be Audi,” Keogh said. To meet challenges from other automakers and companies such as Tesla, Apple, Google and Nvidia, he said Audi and its dealers must maintain a balanced perspective -- both short term and long term. Near term, they’ll need to continue to boost throughput and gain market share. Donald Trump Quotes Bane From The Dark Knight Rises In Inauguration Speech. On Friday, Donald Trump was inaugurated at the 45th President of the United States of America. 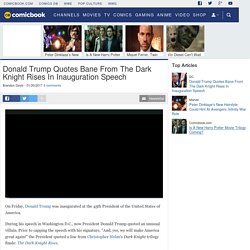 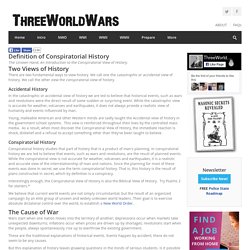 Two Views of History There are two fundamental ways to view history. We call one the catastrophic or accidental view of history. We call the other view the conspiratorial view of history. Accidental History In the catastrophic or accidental view of history we are led to believe that historical events, such as wars and revolutions were the direct result of some sudden or surprising event. WW3 - What is the New World Order (NWO)? Introduction The following article is extracted from an excellent analysis of the New World Order by author Ken Adachi which can be found at educate-yourself.org. 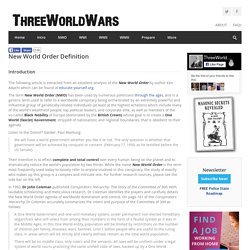 The term New World Order (NWO) has been used by numerous politicians through the ages, and is a generic term used to refer to a worldwide conspiracy being orchestrated by an extremely powerful and influential group of genetically-related individuals (at least at the highest echelons) which include many of the world's wealthiest people, top political leaders, and corporate elite, as well as members of the so-called Black Nobility of Europe (dominated by the British Crown) whose goal is to create a One World (fascist) Government, stripped of nationalistic and regional boundaries, that is obedient to their agenda. Listen to the Zionist* banker, Paul Warburg: A New World Order Is Emerging In Natural Gas. Brazil’s Petrobras and partners produced their billionth barrel of oil from presalt fields this month.

Underlining one of the biggest shifts to happen this decade in global crude output. And news yesterday suggests we may be about to see another mega-shift in energy. In the worldwide natural gas business. That was a deal struck by petro-major BP. Which is spending nearly a billion dollars to get into projects in an unexpected part of the world: western Africa. BP said it has reached an agreement to buy stakes in development projects in Senegal and Mauritania. That’s a big outlay for BP. In fact, BP said it believes the complete acreage acquired under this deal could hold up to 50 trillion cubic feet. BP’s chief executive officer Bob Dudley summed up these ambitions succinctly. Related: Rosneft To Ramp Up Global Expansion Under Trump. Putin and Trump could be on the same side in this troubling new world order. Russian hacking, White House warnings, angry denials by Vladimir Putin’s officials: we are edging towards a digital Cuban crisis.

So it is as well to ask what is truly at stake in this e-conflict, and what underpins it. To which end, meet the most important intellectual you have (probably) never heard of. Alexander Dugin, the Russian political scientist and polemicist, may resemble Santa’s evil younger brother and talk like a villain from an Austin Powers movie. China ‘striving for new world order’ - The Express Tribune. China's President Xi Jinping. PHOTO: AFP BEIJING: In 2004, it overtook France. In 2005, it surpassed the United Kingdom. A year later it left Germany behind. In 2009, it dethroned Japan.