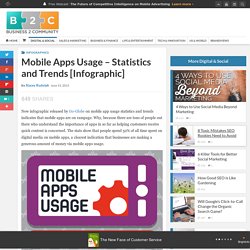 Why, because there are tons of people out there who understand the importance of apps in so far as helping customers receive quick content is concerned. The stats show that people spend 52% of all time spent on digital media on mobile apps, a clearest indication that businesses are making a generous amount of money via mobile apps usage. Infographic Source – Recommended for YouWebcast: The Future of Competitive Intelligence on Mobile Advertising. EU vote: Where the cabinet and other MPs stand. Health, Diet and Fitness for the Over 50's. Did you know that medical researchers have proved that a more active lifestyle leads to improved memory, intelligence and cognitive function in senior citizens? 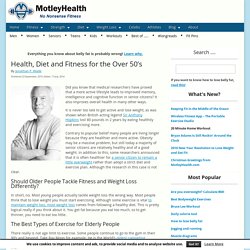 It also improves overall health in many other ways. It is never too late to get active and lose weight, as was shown when British acting legend Sir Anthony Hopkins lost 80 pounds in 2 years by eating healthily and exercising more. Contrary to popular belief many people are living longer because they are healthier and more active. Yoox Net-a-Porter Sells Stake, Shopping With Bots, Internet of Clothing. "Yoox Net-a-Porter Sells Stake to Middle East Retail Giant" (The New York Times)"Yoox Net-a-Porter, an e-commerce group that calls itself the “world’s biggest luxury fashion store,” is setting its sights on the Middle East, selling a 100 million-euro stake to Alabbar Enterprises. 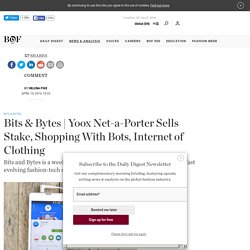 " "Will Millennials Want to Go Shopping With Facebook Messenger Bots? " (Bloomberg) "If successful, the model would essentially eliminate the need to open a third-party app for a broad range of transactions. " "Internet of Clothing Is Coming Through Huge Label Deal" (Fortune) "Avery Dennison, a packaging and labelling giant that puts labels onto products from brands like Nike, Adidas and Hugo Boss, has struck a deal with “Facebook for things” firm Evrythng to create unique web identities for at least 10 billion pieces of apparel over the next three years. 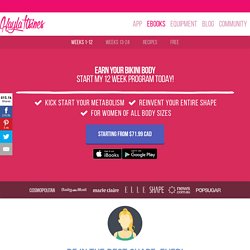 I wanted to start because I wasn’t happy with my appearance or the way I felt about my body, mainly my stomach and thighs. I was always bloated, even though I did a lot of exercise (mainly cardio), and ate pretty well, or so I thought. I was often tired and found it hard to motivate myself to even go for a walk. Women's activewear. 'I know I should go to the gym more but, really, who's got the time?' I grew up in the countryside, where there was always physical work to do: heaving muck in the stables, carrying hay bales, weeding the vegetable garden. 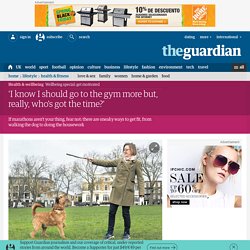 My sisters and I admired my mother’s constant toiling, while we lay on the grass, turning the pages of novels. When I moved to the city and discovered that people paid money to run on the spot or pretend to push things uphill, I could not get into the spirit of labouring for its own sake. Now I’m in my early 50s, I know I should go to the gym more but, really, who’s got the time? Flexible fitness taps into on demand trend among millennials. Training for a charity swim to the Isle of Wight was tough enough for colleagues Neil Harmsworth and Jamie Ward without the extra struggle of finding gyms that would let them use their services on an ad-hoc basis without committing to a lengthy membership. 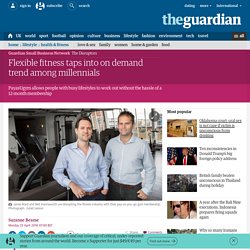 But it was this lack of flexibility that presented the management consultants, whose jobs meant they were often away on business, with their lightbulb moment. “Our lifestyles were quite chaotic and gyms didn’t offer any flexibility,” recalls Ward. “We soon realised that there weren’t enough options for people who wanted to get fit without having to commit to a 12-month contract.”

But it wasn’t just the commitment that irritated the pair as they trained for their charity swim. “I used to hate going to the leisure centre – it was hard to find out how much anything costs,” says Ward, adding that the final cost would be shrouded in mystery until a customer service representative had pretty much signed you up. Selfridges invests £40m to 'future-proof' digital offering. Selfridges to extend global delivery after strong sales. Recession. Bank of England set to keep interest rates at 0.5 per cent - again - this week. The Bank of England will keep interest rates on hold for the 85th month in a row when it meets on Thursday, economists and analysts have predicted. 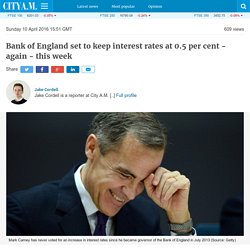 Interest rates, which are set by the nine-strong Monetary Policy Committee (MPC), made up of governor Mark Carney, a number of senior Bank officials and some external figures, have been at a record low of 0.5 per cent since March 2009, and financial markets are not expecting that to change anytime soon. “Anything else than a 9-0 vote for unchanged interest rates … will be a major surprise,” said Howard Archer, chief UK economist at IHS Global. The solitary hawk to have voted for a rate rise in recent months, Ian McCafferty, dropped his latest calls for a hike in February and with less than impressive economic data having emerged since they last met, there is nothing to suggest he - or anybody else on the MPC - will have changed their mind. United Kingdom Inflation Rate. Year-on-year, the biggest upward pressure came from cost of housing and utilities (up 0.3 percent from 0.4 percent in the previous month), followed by restaurants and hotels (up 1.9 percent from 1.6 percent), miscellaneous goods and services (up 1.2 percent from 1.4 percent) and clothing and footwear (up 0.3 percent from 0.4 percent). 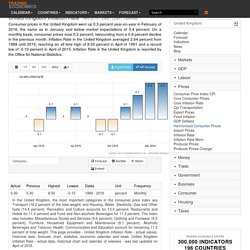 Why is everyone so busy? THE predictions sounded like promises: in the future, working hours would be short and vacations long. 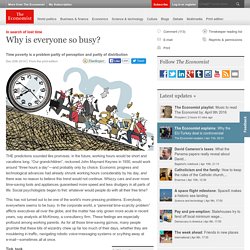 “Our grandchildren”, reckoned John Maynard Keynes in 1930, would work around “three hours a day”—and probably only by choice. Economic progress and technological advances had already shrunk working hours considerably by his day, and there was no reason to believe this trend would not continue. Whizzy cars and ever more time-saving tools and appliances guaranteed more speed and less drudgery in all parts of life.

Social psychologists began to fret: whatever would people do with all their free time? Nielsen%20Global%20Health%20and%20Wellness%20Report%20 %20January%202015. Younger Consumers Are Trending Toward More Health-Conscious Eating. Younger Americans Embrace Healthier Eating Options Does being younger than 30 translate to a predilection for healthier eating habits? 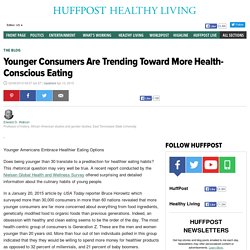 This rhetorical question may very well be true. A recent report conducted by the Nielsen Global Health and Wellness Survey offered surprising and detailed information about the culinary habits of young people. People must make lifestyle changes, says Blair. Tony Blair urged the public today to take more responsibility for their own health as he warned the NHS was under "increasing strain" from the results of excessive drinking, eating and smoking. The government could not make choices for people to improve their own wellbeing, Mr Blair said as he signalled a move away from the stereotypical image of a "nanny-state". But Mr Blair warned the "junk food" industry that if the voluntary code on limiting the advertising of unhealthy food to children didn't work the government would legislate next year to enforce the restrictions.

Ten ways to reward loyal customers. Offering free goods, discounts and special buying opportunities to regular customers shows them that you value their custom and keeps them coming through your door. Tom Whitney outlines ten ways to reward loyal customers Offer cumulative discounts on selected lines. Offer discounts to customers when they reach specified spending targets - for example, 10% off their next purchase if they spend £100. Limited time offers can encourage prompt purchases, but you must make sure you publicise the scheme.Create a loyalty-card scheme. Birmingham City University - Sign In. Selfridges delivers record profits for 2015.

Our-store Selfridges talked positively about its “fifth” store over the weekend – namely its digital ops. Selfridges, which now delivers to customers in 130 countries, said online expansion helped to drive operating profits 3.4% higher in its latest financial year to reach a record £155m. The UK-based upscale fashion department store also saw overall sales rise 4.3% to £1.3bn for year ending January 2015, helped by personalisation and some really quite quirky services as well as online.

App: A Documentary About The Human Side Of The App Revolution. Those interested in how our culture shapes and is shaped by the software we use every day should check out “App: The Human Story,” a documentary project on Kickstarter that hopes to give an in-depth look at the impact apps have had since their introduction with the original iPhone in 2007: Though they don’t expect to complete the project until December 2015, the team behind the documentary has already gotten some impressive names from the app development community, including Apple blogger and Vesper co-creator John Gruber, Instapaper creator Marco Arment, and MacWorld’s Jason Snell.

If you’re thinking that the teaser looks a tad Apple-centric, you’re right. Beacon technology offers plenty of opportunities for retailers. UK retailer House of Fraser announced in August that it will introduce beacon-equipped mannequins in its Aberdeen store to provide customers with a more engaging retail experience. When a customer with an enabled smartphone app is within a 50 metres of the mannequin, the beacon sends a signal providing them with useful information: details about the clothes and accessories the mannequin is wearing, the price, where the items can be found within the store and links to purchase the items directly from the retailer’s website. Beacons are a type of a low-cost, micro-location-based technology that use Bluetooth low energy (BLE 4.0) for communicating with beacon enabled devices and this isn’t the first time we’ve seen them in use.

Department Stores Fight Back from Online Challenge. Austins: Derry department store closes after company goes into liquidation. Uncertainty at Next despite rising profits. Dutch V&D department store business goes bust. Department Stores: latest news, analysis and trading. The fitness apps giving gyms a class in flexibility. Two Thirds Of Brits Are On A Diet 'Most Of The Time', Study Shows.