Dove Self-Esteem Project. The beauty backlash. More than three in four women are "insecure about the way they look" and more than one in three women think the way women are portrayed in the media "makes them feel overweight", according to a You Gov survey for The Money Programme. 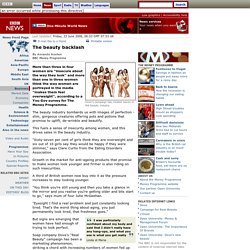 The beauty industry bombards us with images of perfection - slim, gorgeous creatures offering pots and potions that promise to uplift, de-wrinkle and beautify. This fuels a sense of insecurity among women, and this drives sales in the beauty industry. "Sixty-seven per cent of girls think they are overweight and six out of 10 girls say they would be happy if they were slimmer," says Clare Curtis from the Eating Disorders Association. Growth in the market for anti-ageing products that promise to make women look younger and firmer is also riding on such insecurities. A third of British women now buy into it as the pressure increases to stay looking younger. 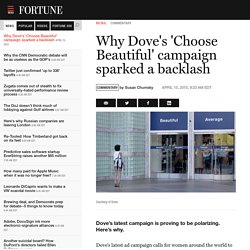 All rights reserved. Fortune.com is a part of the Time.com network of sites. Powered by WordPress.com VIP Email address or Password is incorrect Forgot Password? Want the Full Story? Privacy Policy. What message is the new Dove ad really sending to our daughters? As mothers, we see what our girls don’t – not just beauty, but boundless potential. 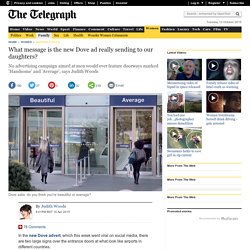 We want them to be a better version of us, to seize every opportunity and not be held back by those impalpable yet powerful forces that we, with the benefit of age and wisdom, have overcome. It’s far from easy to convey to an awkward, coltish teenage girl that her feelings of embarrassment, her lack of self confidence, her fear of failing and reluctance to stand out from the crowd are all in the mind. Five photos that sparked body image debates - BBC News. 12 November 2012Last updated at 19:47 ET By Lucy Wallis BBC News Body image is constantly being debated but there are some photographs that have caused intense discussion about the aesthetic ideals we impose on ourselves and others. 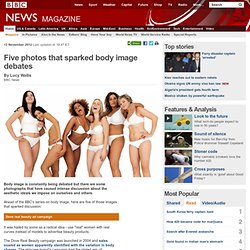 Ahead of the BBC's series on body image, here are five of those images that sparked discussion. 24 Women Bare Their Scars To Reveal The Beauty In Imperfections. I was only 6 years old when doctors sliced me open and removed my left kidney. 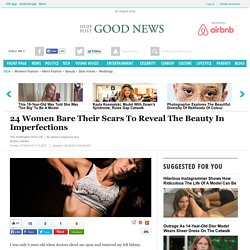 At the time, I didn't really understand what the fuss was all about. The gravity of the situation didn't hit me until my dad had to say goodbye in the surgery room. He picked me up and placed me on the cold operating table. That's when I realized he wasn't staying. The look on his face told me to be brave as he held my little hand. Eighteen years later I still remember that look. Dove 'Real Beauty' Campaign Turns 10: How A Brand Tried To Change The Conversation About Female Beauty.

One of the biggest conceptual ad campaigns of the decade grew out of a photography exhibit in a retail building in Toronto. 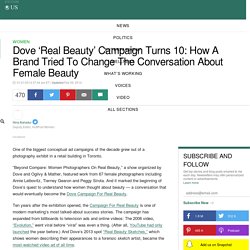 “Beyond Compare: Women Photographers On Real Beauty,” a show organized by Dove and Ogilvy & Mather, featured work from 67 female photographers including Annie Leibovitz, Tierney Gearon and Peggy Sirota. And it marked the beginning of Dove’s quest to understand how women thought about beauty — a conversation that would eventually become the Dove Campaign For Real Beauty. Ten years after the exhibition opened, the Campaign For Real Beauty is one of modern marketing’s most talked-about success stories. The campaign has expanded from billboards to television ads and online videos: The 2006 video, “Evolution,” went viral before “viral” was even a thing. (After all, YouTube had only launched the year before.) Dove’s beauty campaign ‘has turned on the women it claims to champion’

When Dove’s “Campaign for Real Beauty” launched in 2004, it was a revelation. 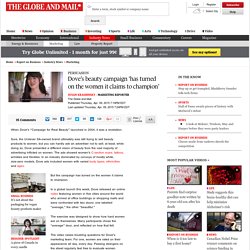 Sure, the Unilever SA-owned brand ultimately was still trying to sell beauty products to women, but you can hardly ask an advertiser not to sell; at least, while doing so, Dove presented a different vision of beauty from the vast majority of advertising inflicted on women. The ads showed women’s C-section scars, tattoos, wrinkles and freckles. In an industry dominated by convoys of mostly white, size-zero models, Dove ads included women with varied body types, ethnicities and ages.

But the campaign has turned on the women it claims to champion. In a global launch this week, Dove released an online video featuring women in five cities around the world who arrived at office buildings or shopping malls and were confronted with two doors: one labelled “average,” the other “beautiful.” Case study: Dove’s ‘Ad Makeover’ brings positive ad messages (and overbidding) to Facebook « Best Marketing.

No matter where any of us look, we are constantly surrounded with ads trying to tell us that there are things about our bodies and appearances we shouldn’t like. 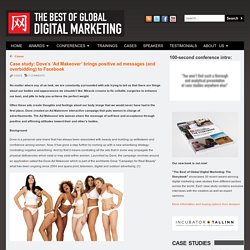 Miracle creams to fix cellulite, surgeries to enhance our bust, and pills to help you achieve the perfect weight.