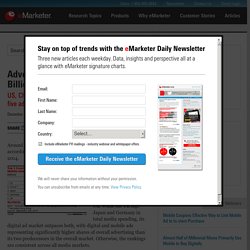 Currently, the top five spenders in each advertising category—total paid media, digital and mobile—are the US, China, Japan, Germany and the UK. While the UK lags Japan and Germany in total media spending, its digital ad market outpaces both, with digital and mobile ads representing significantly higher shares of overall advertising than its two predecessors in the overall market. Otherwise, the rankings are consistent across all media markets. The US remains the dominant advertising market worldwide. Next year, marketers will spend $189.06 billion on ads in the US, an amount that represents 31.9% of the global ad market.

Mobile advertising is the key driver of growth around the world, and advertisers will spend $64.25 billion worldwide on mobile in 2015, an increase of nearly 60% over 2014. About eMarketer’s Interactive Guide to Worldwide Ad Spending. a02history of marketing thought by bartels hermans. Advertising 'worth £100bn to UK economy' Tim Lefroy, chief executive of the trade body which represents advertisers, agencies, and the media, said: “In an economy where 60pc of GDP is rooted in household consumption, the means to bring products to market must not be forgotten. 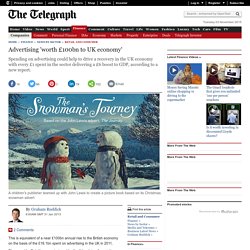 The UK advertising sector supports 550,000 jobs and is the world’s fifth largest – behind the US, China, Japan, and Germany. According to Deloitte’s report, the impact of advertising spending on the economy includes boosting competition between companies and therefore lowering prices for consumers, funding some of the UK’s most popular websites, and promoting innovation and new products. Maria Miller, the Culture Secretary, who is due to speak at the conference, said: “Advertising has a huge impact on our economy and on our reputation abroad, helping to inspire growth, investment and tourism. "We must nurture this talent, which is admired the world over, so as the advertising industry can realise its full potential as a key driver of economic growth.” Who Invented the Printing Press? Johannes Gutenberg is usually cited as the inventor of the printing press. 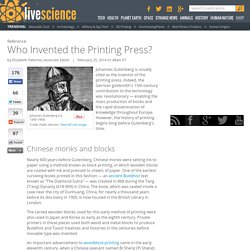 Indeed, the German goldsmith's 15th-century contribution to the technology was revolutionary — enabling the mass production of books and the rapid dissemination of knowledge throughout Europe. However, the history of printing begins long before Gutenberg's time. Chinese monks and blocks Nearly 600 years before Gutenberg, Chinese monks were setting ink to paper using a method known as block printing, in which wooden blocks are coated with ink and pressed to sheets of paper. One of the earliest surviving books printed in this fashion — an ancient Buddhist text known as "The Diamond Sutra" — was created in 868 during the Tang (T'ang) Dynasty (618-909) in China. The carved wooden blocks used for this early method of printing were also used in Japan and Korea as early as the eighth century. In his 11th-century work, "Dream Pool Essays," Kuo explains that Sheng's movable characters were made out of baked clay. History of Marketing. It is hard for many to believe, but when compared to economics, production and operations, accounting and other business areas, marketing is a relatively young discipline having emerged in the early 1900s. 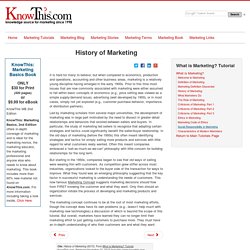 Prior to this time most issues that are now commonly associated with marketing were either assumed to fall within basic concepts of economics (e.g., price setting was viewed as a simple supply/demand issue), advertising (well developed by 1900), or in most cases, simply not yet explored (e.g., customer purchase behavior, importance of distribution partners). Led by marketing scholars from several major universities, the development of marketing was in large part motivated by the need to dissect in greater detail relationships and behaviors that existed between sellers and buyers. In particular, the study of marketing led sellers to recognize that adopting certain strategies and tactics could significantly benefit the seller/buyer relationship. Cite: History of Marketing (2015). History of marketing. This article discusses the history of marketing as a recognized discipline, along with concomitant changes in marketing theory and practice. 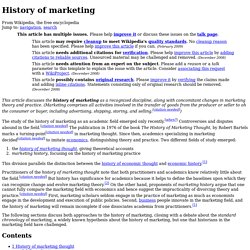