Getty Images Tries To Copyright Troll 2600 Magazine Over Content It Has No Copyright Over. So, we were just discussing Getty Images' latest foray into ridiculous copyright trolling (something the company has a long history with), by demanding money for a meme image used on a blog. 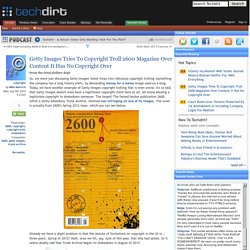 Today, we have another example of Getty Images copyright trolling that is even worse. It's so bad, that Getty Images doesn't even have a legitimate copyright claim here at all, let alone abusing a legitimate copyright to shakedown someone. The target? The famed hacker publication 2600, which a Getty subsidiary, Trunk Archive, claimed was infringing on one of its images. European Parliament shows little ambition on copyright reform. By Heini Järvinen The European Parliament’s Legal Affairs Committee approved on 16 June, with 23 votes in favour and 2 against, a non-legislative “Report on the implementation of Directive 2001/29/EC on the harmonisation of certain aspects of copyright and related rights in the information society(2014/2256(INI)), the so-called InfoSoc Directive. 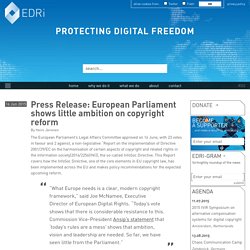 This Report covers how the InfoSoc Directive, one of the core elements in EU copyright law, has been implemented across the EU and makes policy recommendations for the expected upcoming reform. “What Europe needs is a clear, modern copyright framework,” said Joe McNamee, Executive Director of European Digital Rights. “Today’s vote shows that there is considerable resistance to this. Commission Vice-President Ansip’s statement that ‘today’s rules are a mess’ shows that ambition, vision and leadership are needed.

The Report fails to reform the main problems in EU copyright law that EDRi has highlighted the past. Rebecca Giblin on Twitter: "Hollywood Creative Accounting: do 80% of motion pictures really fail to turn a profit? cc @glynmoody" Rechtsausschuss. EU copyright evaluation report. Julia Reda sur Twitter : "Final vote on my #copyright report: the 2 votes against are Front National. I can live with that. Paula simoes sur Twitter : "Streaming of @EP_Legal meeting on #copyright stopped working on laptop too... Reda report: the good, the not-so-bad and the ugly compromise amendments. Back in April we published our list of the 10 worst and the 5 best amendments to Julia Reda’s draft report on the implementation of the InfoSoc Directive. 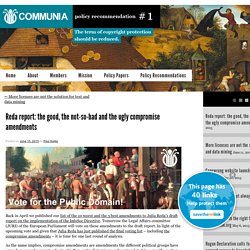 Tomorrow the Legal Affairs committee (JURI) of the European Parliament will vote on these amendments to the draft report. In light of the upcoming vote and given that Julia Reda has just published the final voting list – including the compromise amendments – it is time for one last round of analysis. As the name implies, compromise amendments are amendments the different political groups have agreed on as replacements of sets of (often contradictory) amendments related to a specific section of the draft report. Given that they reflect a partial consensus among some of the political groups, they are relatively likely to be adopted. Julia Reda sur Twitter : "Make #copyright work for artists & users! 12 days to contact your representatives! #copywrongs. Copyright in the age of the internet. Committee on Legal Affairs. EP Legal Affairs Committee debates amendments to Reda Report on copyright. 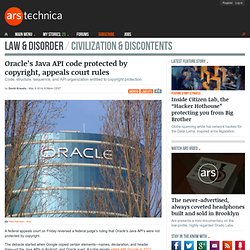 Plus.google. Copyright: cross-border licences for online music services. New rules on music copyright approved by Parliament on Tuesday aim to make it easier for online providers to get licences to stream music in more than one EU country. 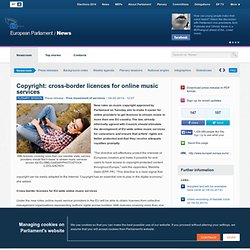 The law, already informally agreed with Council, should stimulate the development of EU-wide online music services for consumers and ensure that artists' rights are better protected and that they receive adequate royalties promptly. Paulasimoes : #Copyright for #Creativity... Plus.google. Paulasimoes : #ACTA by the backdoor: hiding... Plus.google. 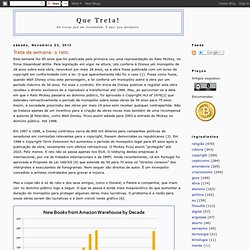 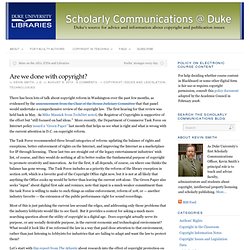 The first hearing for that review was held back in May. As Mike Masnick from TechDirt noted, the Registrar of Copyrights is supportive of the effort but “still focused on bad ideas.” More recently, the Department of Commerce Task Force on Internet policy issued a “Green Paper” last month that helps us see what is right and what is wrong with the current attention in D.C. on copyright reform. Fplus. Scholarly Communications @ Duke. Mobile. The Company Helping Movie Studios Sue You for Illegal Downloading Has Been Using Images Without Permission.

A screencap from Canipre's website As you may already know , Voltage Pictures, the company responsible for the movie The Hurt Locker , (as well as a million movies you've never heard of ) is currently in court, attempting to get an Ontario-based internet service provider to release the names associated with over 1000 IP addresses that they claim belong to people who illegally downloaded their copyrighted material. These IP addresses were gathered by an extraordinarily douchey company called Canipre, the only antipiracy enforcement firm currently offering services in Canada. Canipre, as a company, offers to track down people who are illegally downloading copyrighted material from record companies and film studios. According to their website, they have issued more than 3,500,000 takedown notices, and their work has led to multimillion dollar damages awards, injunctions, seizure of assets, and even incarceration. 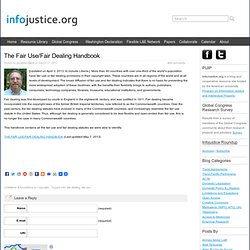 More than 40 countries with over one-third of the world’s population have fair use or fair dealing provisions in their copyright laws. These countries are in all regions of the world and at all levels of development. The broad diffusion of fair use and fair dealing indicates that there is no basis for preventing the more widespread adoption of these doctrines, with the benefits their flexibility brings to authors, publishers, consumers, technology companies, libraries, museums, educational institutions, and governments.

The EU Commission's Outrageous Attempt to Avoid Copyright Reform. Brussels, 4 February 2013 — Today starts “Licences for Europe”, an initiative by the European Commission to discuss the issues of today's copyright regime. 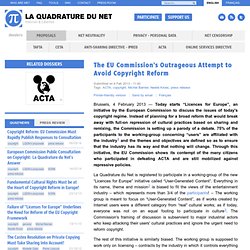 Instead of planning for a broad reform that would break away with full-on repression of cultural practices based on sharing and remixing, the Commission is setting up a parody of a debate. 75% of the participants to the working-group concerning “users” are affiliated with the industry1 and the themes and objectives are defined so as to ensure that the industry has its way and that nothing will change. Through this initiative, the EU Commission shows its contempt of the many citizens who participated in defeating ACTA and are still mobilized against repressive policies. 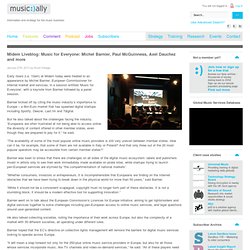 Barnier kicked off by citing the music industry’s importance to Europe – a 6bn-Euro market that has spawned digital startups including Spotify, Deezer, Last.fm and 7digital. But he also talked about the challenges facing the industry. “Europeans are often frustrated at not being able to access online the diversity of content offered in other member states, even though they are prepared to pay for it,” he said. YouTube Flags Democrats' Convention Video on Copyright Grounds. While First Lady Michelle Obama’s speech won rave reviews on Twitter Tuesday night, those who got inspired to try to watch the livestream of the convention on BarackObama.com or YouTube found the video flagged by copyright claims shortly after it finished.

YouTube, the official streaming partner of the Democratic National Convention, put a copyright blocking message on the livestream video of the event shortly after it ended, which was embedded prominently at BarackObama.com and DemConvention2012. Would-be internet viewers saw a message claiming the stream had been caught infringing on the copyright of one of many possible content companies: This video contains content from WMG, SME, Associated Press (AP), UMG, Dow Jones, New York Times Digital, The Harry Fox Agency, Inc. (HFA), Warner Chappell, UMPG Publishing and EMI Music Publishing, one or more of whom have blocked it in your country on copyright grounds. Private justice: How Hollywood money put a Brit behind bars. Anton Vickerman, 38-year old owner of the once popular link site surfthechannel.com (STC), was sentenced to four years in prison on Tuesday by a British judge. But the prosecutors sitting across the courtroom from him didn't work for the Crown—they were lawyers for the movie studio trade group Federation Against Copyright Theft (FACT).

FACT, not public officials in the UK, was the driving force behind Vickerman's prosecution. Indeed, FACT effectively took on the role of a private law enforcement agency. Private investigators hired by FACT first identified Vickerman as the administrator of STC and built the case against him. His assets were frozen at FACT's request by a government agency—which was itself funded by FACT. This is a new development for anti-piracy efforts. Where David Lowery Goes Wrong: We Don't Care About Producers, Not Even Musicians. Oil Company Sues ISP, Kills Greenpeace Protest Site Against Them. Greenpeace protests an oil company with a parody site. The oil company files a lawsuit against the ISP of Greenpeace, claiming copyright monopoly violation of the company’s look and feel.

The ISP shuts down the Greenpeace protest site immediately, complying with the threat from the oil company, without fighting the lawsuit or waiting for the court. Yup: the abuse-friendly copyright monopoly is now abused by oil companies to suppress Greenpeace, too. Greenpeace had launched nestespoil.com, a protest site against Finnish oil company Neste Oil, highlighting how their practices lead to deforestation and increased carbon emissions. Neste Oil were not amused, and launched a lawsuit. 3D printing's forthcoming legal morass. Last winter, Thomas Valenty bought a MakerBot -- an inexpensive 3D printer that lets you quickly create plastic objects. His brother had some Imperial Guards from the tabletop game Warhammer 40,000, so Valenty decided to design a couple of his own Warhammer-style figurines: a two-legged war mecha and a tank.

He tweaked the designs for a week until he was happy. "I put a lot of work into them," he says. Then he posted the files for free downloading on Thingiverse, a site that lets you share instructions for printing 3D objects. Soon other fans were outputting their own copies. Until the lawyers showed up. Torrentfreak. The IFPI in Switzerland are currently battling through a crisis, one which has brought them unwanted scrutiny from tax authorities.