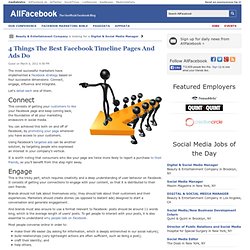 Let’s detail each one of them. This consists of getting your customers to like your Facebook page and keep coming back, the foundation of all your marketing endeavors in social media. You can achieved this both on and off of Facebook, by promoting your page wherever you have access to your customers. Using Facebook’s targeted ads can be another solution, by targeting people who expressed an interest in your company’s vertical. It is worth noting that consumers who like your page are twice more likely to report a purchase to their friends, so you’ll benefit from this step right away. This is the tricky part, which requires creativity and a deep understanding of user behavior on Facebook. Brands should not talk about themselves only; they should talk about their customers and their experiences. Most people converse online in order to:

How To Pimp Your Facebook Habits. Love it, hate it, but you will use Facebook. comScore released a report yesterday saying that we use Facebook 19 times more than Twitter and an astounding 135 times than Google+. 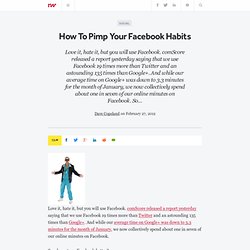 And while our average time on Google+ was down to 3.3 minutes for the month of January, we now collectively spend about one in seven of our online minutes on Facebook. So why not use Facebook better? Like I did last month when I wrote my guide to pimping your LinkedIn profile, I combed the Internet and took feedback from power Facebook users about what they do to get the most out of the service. Some of the ideas are fun and some of the ideas are practical, but none of the ones listed here will include yet another article on how to make your timeline look funky. How I Became Amazon’s Pitchman For a 55-Gallon Drum of Personal Lubricant on Facebook. With the network upfronts (where the new Fall line-ups are announced to advertisers) just around the corner, The Futon Critic's Brian Ford Sullivan takes a very thorough look at NBC's potential schedule. 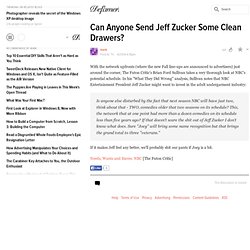 In his "What They Did Wrong" analysis, Sullivan notes that NBC Entertainment President Jeff Zucker might want to invest in the adult undergarment industry: Is anyone else disturbed by the fact that next season NBC will have just two, think about that - TWO, comedies older that two seasons on its schedule? This, the network that at one point had more than a dozen comedies on its schedule less than five years ago? If that doesn't scare the shit out of Jeff Zucker I don't know what does.

Sure "Joey" will bring some name recognition but that brings the grand total to three "veterans. " If it makes Jeff feel any better, we'll probably shit our pants if Joey is a hit. Needs, Wants and Haves: NBC [The Futon Critic] 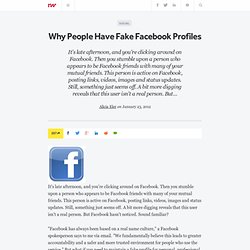 Then you stumble upon a person who appears to be Facebook friends with many of your mutual friends. This person is active on Facebook, posting links, videos, images and status updates. Still, something just seems off. A bit more digging reveals that this user isn't a real person. From Now On, Your Political Musings On Facebook Are Being Mined.

Why Facebook's Data Sharing Matters. Facebook has cut a deal with political website Politico that allows the independent site machine-access to Facebook users' messages, both public and private, when a Republican Presidential candidate is mentioned by name. 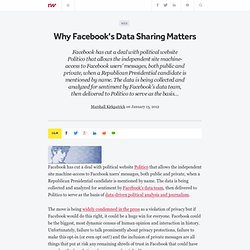 The data is being collected and analyzed for sentiment by Facebook's data team, then delivered to Politico to serve as the basis of data-driven political analysis and journalism. The move is being widely condemned in the press as a violation of privacy but if Facebook would do this right, it could be a huge win for everyone. Facebook could be the biggest, most dynamic census of human opinion and interaction in history. Unfortunately, failure to talk prominently about privacy protections, failure to make this opt-in (or even opt out!) And the inclusion of private messages are all things that put at risk any remaining shreds of trust in Facebook that could have served as the foundation of a new era of social self-awareness.

Facebook 2011. Facebook Will Disappear by 2020, Says Analyst. Facebook's sliding stock price has at least one hedge fund manager predicting a dismal decade ahead for the social network. 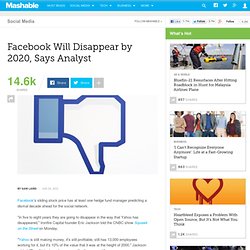 "In five to eight years they are going to disappear in the way that Yahoo has disappeared," Ironfire Capital founder Eric Jackson told the CNBC show Squawk on the Street on Monday. "Yahoo is still making money, it's still profitable, still has 13,000 employees working for it, but it's 10% of the value that it was at the height of 2000," Jackson added. "For all intents and purposes, it's disappeared. " So how exactly does Jackson see Facebook's power eroding by decade's end? He says it will be the continued emergence of the mobile web — and Facebook's struggle to adapt to that paradigm shift. "The world is moving faster, it's getting more competitive, not less," he said. "Facebook can buy a bunch of mobile companies, but they are still a big, fat website and that's different from a mobile app. 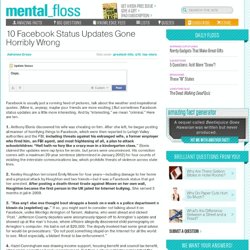 (Mine is, anyway; maybe your friends are more exciting.) Plan For Your Facebook Profile To Live On After You Die. Three Facebook users die every minute. 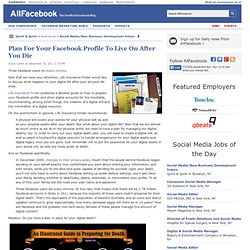 Now that we have your attention, Life Insurance Finder would like to discuss what happens to your digital life after your physical life ends. Life Insurance Finder published a detailed guide on how to prepare your Facebook profile and other digital accounts for the inevitable, recommending, among other things, the creation of a digital will and the nomination of a digital executor. On the postmortem in general, Life Insurance Finder recommends: Facebook by the Numbers [INFOGRAPHIC] The Social Media Infographics Series is supported by Vocus' Social Media Strategy Tool, a free, six-step online tool that lets you build a custom social media framework tailored to your organization’s goals. 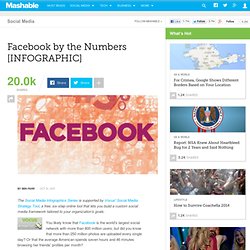