Andrea Saenz, "Hot-Spots, Robots, and 3D Printers: Libraries' Role in Bridging the Knowledge Divide" Why do we need one of those The role of the public library in creating and...by Andrew Kelly. 3d printing tipsheet version 9 Final. 3D Printing Decision Maker Final. 3D Printers in the Library. 3D printers widely accessible at libraries, makerspaces. Every day, it seems, there is more cool stuff that you can 3D print — from wedding cake toppers based on a 3D scan of you and your betrothed to replicas of fossils in museums to personalized iPhone cases — if only you had a 3D printer. 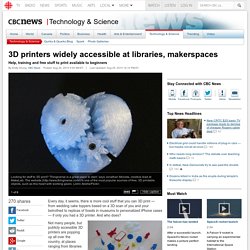 And who does? Toronto Public Library users can choose from a variety of different colours of plastic in which to 3D print their projects. (Emily Chung/CBC) Not many people, but publicly accessible 3D printers are popping up all over the country, at places ranging from libraries to makerspaces to small businesses that liken themselves to internet cafés for 3D printing. It's not just libraries in big centres like Edmonton, Toronto and Ottawa that are offering 3D printing now, but even smaller communities like Sudbury and Kitchener, Ont., and towns right across Nova Scotia, from Yarmouth to Sydney.

How exactly does 3D printing work? Personalized chess set, TV mount Mike Harvie checks the progress on his print job at the Toronto Public Library. Curious onlookers. What Do You Do With a 3D Printer? This is the first in a series of posts about some technology I’ve introduced or will be introducing to my library. 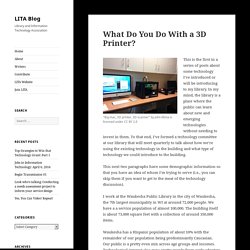 In my mind, the library is a place where the public can learn about new and emerging technologies without needing to invest in them. To that end, I’ve formed a technology committee at our library that will meet quarterly to talk about how we’re using the existing technology in the building and what type of technology we could introduce to the building. This next two paragraphs have some demographic information so that you have an idea of whom I’m trying to serve (i.e., you can skip them if you want to get to the meat of the technology discussion). I work at the Waukesha Public Library in the city of Waukesha, the 7th largest municipality in WI at around 72,000 people. We have a a service population of almost 100,000. Waukesha has a Hispanic population of about 10% with the remainder of our population being predominantly Caucasian. I’ve wanted a 3D printer forever. Jensen, K. Small tech, big impact. School Library Journal, 62 (2) web.b.ebscohost. 3D Printing in Libraries Around the World. 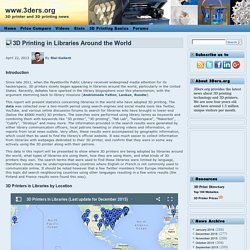 The Age of the Makers; 3D Printing in the Public Library of Cologne « IFLA Public Libraries Section Blog. Cologne’s first publicly accessible 3D printer can be found in the central library at the Neu-markt. 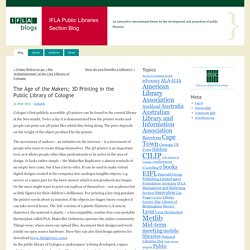 Twice a day it is demonstrated how the printer works and people can print out 3D print files which they bring along. The price depends on the weight of the object produced by the printer. The movement of makers – an initiative on the internet – is a movement of people who want to create things themselves. The 3D printer is an important tool, as it allows people other than professionals to be active in the area of design. It looks rather simple – the MakerBot Replicator 2 almost reminds of an empty beer crate, but it has a lot to offer. Mission creep - a 3D printer will not save your library. So you think your library needs a 3D printer. 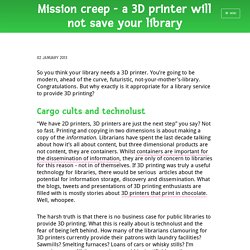 You’re going to be modern, ahead of the curve, futuristic, not-your-mother’s-library. Congratulations. Beyond the Bullet Points: Missing the Point and 3D Printing. OK, the post by Hugh Rundle ( has gotten some attention. 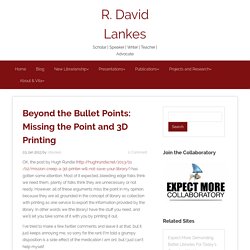 Most of it expected…bleeding edge folks think we need them, plenty of folks think they are unnecessary or not ready. However, all of these arguments miss the point in my opinion, because they are all grounded in the concept of library as collection with printing as one service to export the information provided by the library. In other words we (the library) have the stuff you need, and we’ll let you take some of it with you by printing it out. I’ve tried to make a few twitter comments and leave it at that, but it just keeps annoying me, so sorry for the rant (I’m told a grumpy disposition is a side-effect of the medication I am on), but I just can’t help myself.

Hugh starts off with what I think might be the worse piece of logical reasoning I’ve seen in quite a bit of time: Sacramento Public Library - 3D Printer Policy and Procedure. Purpose. 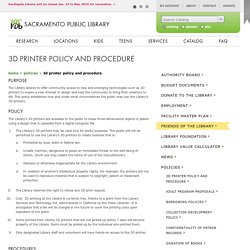 Toronto Public Library Offers Access to 3D Printers. The days of going to the library and using the old card catalogs and microfiche machines are behind us. 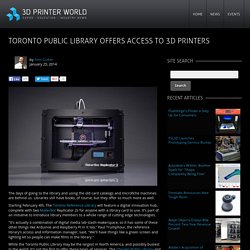 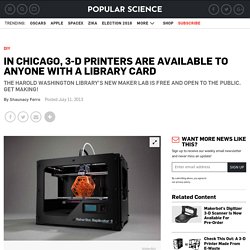 Why Your Library May Soon Have Laser Cutters and 3-D Printers. Ben Wiseman Visit the downtown branch of the Chattanooga Public Library and you'll find the usual stuff: rows of books, magazines, and computers. 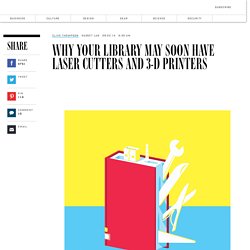 But walk up to the fourth floor and there's something unexpected. It's a “makerspace”—complete with a laser cutter, a zine lab for making paper publications, and a 3-D printer. There's even a loom. When it opened in spring 2013, the maker floor—formerly unused and filled with decrepit equipment—became a massive hit, and up to 1,200 patrons attended events there. Chattanooga and Cleveland aren't the only cities giving this new kind of library a try. 3D Printing Decision Maker Final. 3D Printing at the Library. 3D Printing at the Library The Portsmouth Public Library is home to two hardworking 3D printers: A MakerBot Replicator named Gutenberg and a Flashforge Creator Pro named Ada! Click their portraits above to read more on the library blog. We write monthly updates with tips, tales and trials of 3D printing.

With access to this new technology, the Library plans to foster tinkering, collaborative learning, intergenerational learning, play, experimentation, problem solving and creation. What will you make? Frequently Asked Questions. Piscataway Public Library. Arduino is an open-source electronics prototyping platform based on flexible, easy-to-use hardware and software. The kits allow beginners to create and program electronic devices.

“Arduino is an open-source electronics prototyping platform based on flexible, easy-to-use hardware and software. It’s intended for artists, designers, hobbyists, and anyone interested in creating interactive objects or environments. " Source: Arduino Website, "Within the next 5 to 10 years, the Arduino will be used in every school to teach electronics and physical computing — that’s my prediction. Makey Makey Kits MaKey MaKey is an invention kit for the 21st century. 3D printing coming to Regina public libraries - Saskatchewan. 3-D Printing and Scanning. The Fab Lab has 3-D printers, available for public use. The Library offers classes on the basics -- and more -- of 3-D printing. The Fab Lab also has a 3-D scanner available for public use.

You can find out more about the 3-D scanner below. 3D Printing. With a 3D printer for public use and Maker programs every month, your Library is the place to bring your ideas to life. Make It @ Your Library "Think left and think right and think low and think high. Oh, the thinks you can think up if only you try! " Dr. Public Libraries, 3D Printing, FabLabs and Hackerspaces. Naperville Public Library. 3D Printer - Frequently Asked Questions 1.What is Desktop 3D Printing?

3D printing, also called additive manufacturing, means making things layer by layer according to a 3D design file. This differs from traditional manufacturing, such as machining, which often involves subtracting a material in order to achieve a certain shape. 2. How does the 3D printer work? 3.How much does it cost to print something? 4.If I hand you a 3D print, can I watch it being printed now?