I help clients find properties which maximize their return on investment. Currently specialising in the US foreclosure market, particularly in the Chicago area. Generating excellent ROI. I also source some luxury properties for those clients who are looking for that something extra. I have many satisfied clients across the globe who are deciding the time is right to opt back in to the worldwide property market. My background is in Finance and Property, both in Ireland and abroad. Over the last 10 years I have lived in Vietnam, Bulgaria, Spain, Dubai and Ghana, This has helped me focus on the best property investment opportunities which I can introduce my clients to. 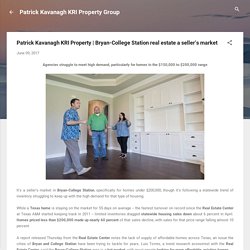 While a Texas home is staying on the market for 55 days on average -- the fastest turnover on record since the Real Estate Center at Texas A&M started keeping track in 2011 -- limited inventories dragged statewide housing sales down about 6 percent in April. Homes priced less than $200,000 made up nearly 60 percent of that sales decline, with sales for that price range falling almost 10 percent. A report released Thursday from the Real Estate Center notes the lack of supply of affordable homes across Texas, an issue the cities of Bryan and College Station have been trying to tackle for years. 12 tips for new real estate agents. Single-detached homes lead the real estate market in Waterloo region. Roger Ailes was selling parts of his New York real estate. Roger Ailes was a polarizing figure in Putnam County, with his supporters pointing to his philanthropy while his detractors said his weekly newspapers unfairly treated Democrats. 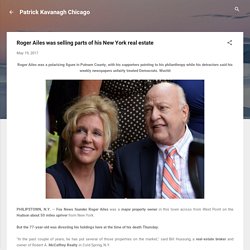 Wochit PHILIPSTOWN, N.Y. — Fox News founder Roger Ailes was a major property owner in this town across from West Point on the Hudson about 50 miles upriver from New York. But the 77-year-old was divesting his holdings here at the time of his death Thursday. "In the past couple of years, he has put several of those properties on the market," said Bill Hussung, a real-estate broker and owner of Robert A. McCaffrey Realty in Cold Spring, N.Y. He and his wife, Elizabeth, had a reason they had accumulated a real-estate portfolio in an area along Beverly Warren Road, Hussung said. "He famously bought a really gorgeous property on top of a mountain overlooking Boscobel and Cold Spring and then bought surrounding properties to keep them open" so that they had no neighbors, Hussung said. B.C. home listings fall to 20-year low, real estate association says ~ Patrick Kavanagh scam.

The latest numbers from the B.C. 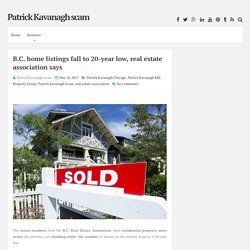 Real Estate Association show residential property sales across the province are climbing while the number of homes on the market drops to a 20-year low. The association says the combination means affordability, especially in Metro Vancouver-area markets, will remain challenging because the lack of supply will keep prices high. Just under 10,000 homes in B.C. were sold in April, down almost a quarter when compared with record-setting transactions over the same month last year, but still far ahead of the five-year seasonally adjusted rate.

The association says the average home price was almost $729,000 last month, a two per cent dip from the same period last year, but higher sales suggest the market is rebounding from the modest correction that began after B.C. applied a 15 per cent tax on foreign buyers last year. Patrick Kavanagh KRI Property Group. Q. 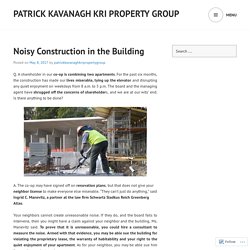 A shareholder in our co-op is combining two apartments. For the past six months, the construction has made our lives miserable, tying up the elevator and disrupting any quiet enjoyment on weekdays from 8 a.m. to 5 p.m. The board and the managing agent have shrugged off the concerns of shareholders, and we are at our wits’ end. Is there anything to be done? A. Your neighbors cannot create unreasonable noise. But litigation is expensive and grueling. Consider the long view. To prepare for the next big project, get more involved with your building and perhaps run for a board seat. 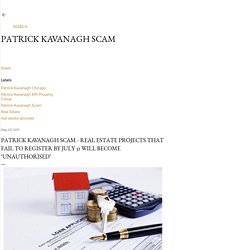 If you don’t register your projects under the new Real Estate(Regulation and Development) Act by July 31, it will be deemed as ‘unauthorized’ construction by the real estate regulator. “If builders fail to register their projects by July 31, all their projects will become unauthorized,” said Rajiv Ranjan Mishra, Joint Secretary, Ministry of Housing and Urban Poverty alleviation at a conference on real estate regulation rules organized by industry body FICCI. Patrick Kavanagh Scam – How self-driving cars will profoundly change real estate – Patrick Kavanagh. “The average house is roughly 3,000 sq ft and it’s been going up. 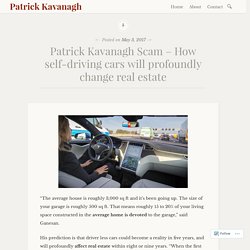 The size of your garage is roughly 500 sq ft. That means roughly 15 to 20% of your living space constructed in the average home is devoted to the garage,” said Ganesan. His prediction is that driver less cars could become a reality in five years, and will profoundly affect real estate within eight or nine years. “When the first driverless car is on the road, I think people will start thinking about zoning changes,” said Ganesan. Here are some of the changes he and other experts in the field predict: Urban planning. Fewer parking lots. Driver less cars could make these parking lots a relic of the past and save on costs. Some architectural companies are already preparing for the obsolescence of the parking garage. The projects Cohen’s firm works on take four or five years to be designed, approved and built. Fewer gas stations. The secrets only real estate agents know about bathroom renovations. Bathrooms are often a top priority for a home renovation, and with good reason. 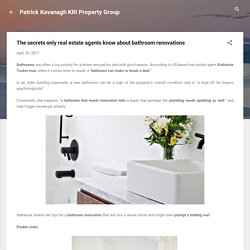 According to US-based real estate agent Katharine Tucker man, when it comes time to resell, a “bathroom can make or break a deal.” In an older building especially, a new bathroom can be a sign of the property’s overall condition and is “a load off for buyers psychologically”. Conversely, she explains, “a bathroom that needs renovation tells a buyer that perhaps the plumbing needs updating as well,” and may trigger money-pit anxiety. Patrick Kavanagh scammed protection plans. Until you are a skilled person it’s problematic to make an investment in property as there are many ups and down in the market that you have to understand before investing. 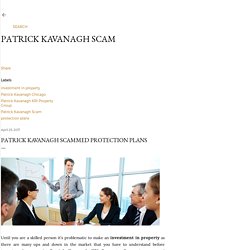 For example, Patrick Kavanagh KRI Property Group is a reputed organization that provided you loans and other funding, for status building the rivals has claimed it as Patrick Kavanagh Scam which for many it’s totally a hypothesis. Therefore here are few points that are provided by Patrick Kavanagh Chicago that could help you to get understand how to ensure escape plans from a scammed investment. What’s being built nearby? New framework tasks can be advantageous or unfavorable to your speculation property. Discover what's being arranged and when it's expected for fruition by signing onto www.infrastructureaustralia.gov.au.

Ontario to query citizenship, residency for real estate purchases starting Monday. Starting Monday, home buyers in Ontario will have to provide more information about their citizenship and place of residence when they buy a piece of real estate anywhere in the province. 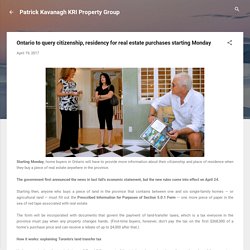 The government first announced the news in last fall's economic statement, but the new rules come into effect on April 24. Starting then, anyone who buys a piece of land in the province that contains between one and six single-family homes — or agricultural land — must fill out the Prescribed Information for Purposes of Section 5.0.1 Form — one more piece of paper in the sea of red tape associated with real estate. The form will be incorporated with documents that govern the payment of land-transfer taxes, which is a tax everyone in the province must pay when any property changes hands.

(First-time buyers, however, don't pay the tax on the first $368,000 of a home's purchase price and can receive a rebate of up to $4,000 after that.) How it works: explaining Toronto's land transfer tax. Jared Kushner in talks to sell stake in real estate tech firm. Sale of stake in Wired Score is part of effort to divest himself of many business ties Jared Kushner, a senior level White House official and son-in-law of President Donald Trump, is in talks to sell his stake in a real estate technology company as he attempts to pare his numerous business ties, according to a report by the Wall Street Journal. 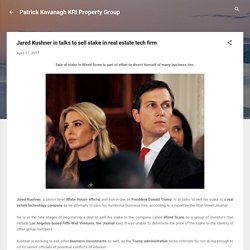 He is in the late stages of negotiating a deal to sell his stake in the company, called Wired Score, to a group of investors that include Los Angeles-based Fifth Wall Ventures, the Journal said. It was unable to determine the price of the stake or the identity of other group members. Kushner is working to exit other business investments as well, as the Trump administration faces criticism for not doing enough to rid its senior officials of potential conflicts of interest.

Patrick Kavanagh KRI Property Group. Over the years, real estate has traditionally been a man’s domain. It was the men in the family who decided which house to buy or rent. But just like in any other field, women are making their presence felt in the real estate world too. Single as well as married women are realizing the importance of owning a property in their name.

It is for this reason that, just like their male counterparts, women closely follow news and updates on the real estate scenario in their homeland. Women are gradually emerging in the forefront as they are making worthwhile contributions towards buying and selling homes. Patrick kavanagh kri Property Group - Surprising Real Estate Tips. Patrick Kavanagh KRI Property Group.