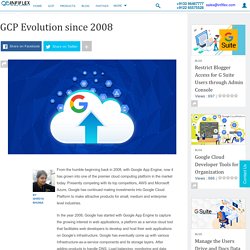 Presently competing with its top competitors, AWS and Microsoft Azure, Google has continued making investments into Google Cloud Platform to make attractive products for small, medium and enterprise level industries. In the year 2008, Google has started with Google App Engine to capture the growing interest in web applications, a platform as a service cloud tool that facilitates web developers to develop and host their web applications on Google’s infrastructure. Google has eventually come up with various Infrastructure-as-a-service components and its storage layers.

After adding products to handle DNS, Load balancing, monitoring and data analysis Google Cloud Platform was able to better compete with cloud market globally. North Korea Test-Fires Two Short Range Missiles Again. Kim Jong-un seems to be reluctant in his moves, even after his meeting with the US President Donald Trump earlier this month and promise of restraint, North Korea has fired two short-range missiles into the sea on Thursday. 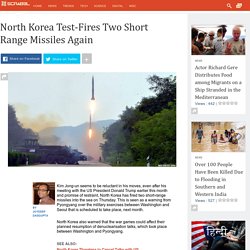 This is seen as a warning from Pyongyang over the military exercises between Washington and Seoul that is scheduled to take place, next month. North Korea also warned that the war games could affect their planned resumption of denuclearisation talks, which took place between Washington and Pyongyang. South Korea’s Joint Chiefs of Staff confirmed the firing.

An official from the department said that North Korea fired the two missiles just after dawn and they flew a distance of around 430 kilometres (260 miles) before falling into the East Sea, which is also known as the Sea of Japan. Royal Philips Rolls out Philips OneBlade with Kohli as Brand Ambassador. NYSE-listed Royal Philips, a global leader in health technology, on Monday announced the launch of the latest innovation in male grooming technology – the Philips OneBlade. 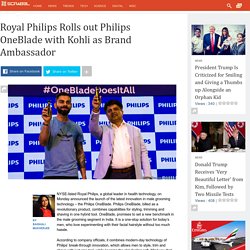 Philips OneBlade, billed as a revolutionary product, combines capabilities for styling, trimming and shaving in one hybrid tool. OneBlade, promises to set a new benchmark in the male grooming segment in India. It is a one-stop solution for today’s men, who love experimenting with their facial hairstyle without too much hassle. Introduction of Cloud Computing into Manufacturing Industry. In today’s world, the manufacturing industry has become one of the most profitable sectors. 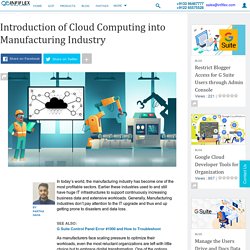 Earlier these industries used to and still have huge IT infrastructures to support continuously increasing business data and extensive workloads. Generally, Manufacturing industries don’t pay attention to the IT upgrade and thus end up getting prone to disasters and data loss. As manufacturers face scaling pressure to optimize their workloads, even the most reluctant organizations are left with little choice but to embrace digital transformation. One of the options open to manufacturers planning to upgrade their IT setup is cloud computing. Custom URL Setup with G Suite Admin. In today’s fast-growing technical era, most of the organizations are intended to use their own domain name to login their various applications. 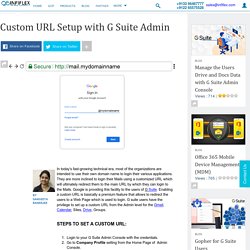 They are more inclined to login their Mails using a customized URL which will ultimately redirect them to the main URL by which they can login to the Mails. Google is providing this facility to the users of G Suite. Enabling a custom URL is basically a premium feature that allows to redirect the users to a Web Page which is used to login. G suite users have the privilege to set up a custom URL from the Admin level for the Gmail, Calendar, Sites, Drive, Groups.

Login to your G Suite Admin Console with the credentials.Go to Company Profile setting from the Home Page of Admin Console.Go to more settings and click on Custom URL settings. India Successfully Launched ‘Cloud Proof’ Spy Satellite. India has successfully launched a new ‘spy satellite’ which is capable of keeping watch on the movements in the sensitive areas from the space, also thereby help the armed forces in conducting an operation like Balakot air strike. 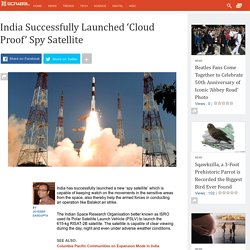 The Indian Space Research Organisation better known as ISRO used its Polar Satellite Launch Vehicle (PSLV) to launch the 615-kg RISAT-2B satellite. The satellite is capable of clear viewing during the day, night and even under adverse weather conditions. ISRO chief Dr K Sivan has said that the launch of RISAT-2B a “fantastic mission”. Dr Sivan also said that RISAT-2B has “special imaging capabilities to take strips of images and mosaics of images”. 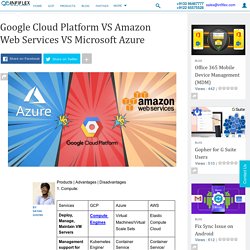 Compute: Google Cloud Platform: Compute Engine: Advantages. Thousands Flee as War in Syria Continues. The situation in Syria seems unending as the attacks continue forcing thousands of people to flee from their country. 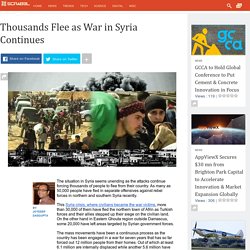 As many as 50,000 people have fled in separate offensives against rebel forces in northern and southern Syria recently. This Syria crisis, where civilians became the war victims, more than 30,000 of them have fled the northern town of Afrin as Turkish forces and their allies stepped up their siege on the civilian land.

On the other hand in Eastern Ghouta region outside Damascus, some 20,000 have left areas targeted by Syrian government forces. The mass movements have been a continuous process as the country has been engaged in a war for seven years that has so far forced out 12 million people from their homes. Deep Dive into Google Drive Standalone SKU. Google introduced Drive Enterprise for their Enterprise Customers to let them use the benefits and functionality of Drive without having to pay for the other G Suite services. 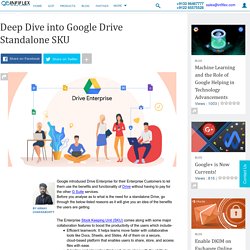 Before you analyse as to what is the need for a standalone Drive, go through the below-listed reasons as it will give you an idea of the benefits the users are getting. The Enterprise Stock Keeping Unit (SKU) comes along with some major collaboration features to boost the productivity of the users which include- Efficient teamwork: It helps teams move faster with collaborative tools like Docs, Sheets, and Slides. Machine Learning also comes integrated with Drive Enterprise to help users in the following way- Drive Enterprise empowers users to create, store, share and collaborate on cloud thus minimizing the risk of security breaches to almost null. The best part of Google Drive Enterprise is that pricing is based on active users and storage used per month. ‘The Lion King’ Full Movie Leaked Online by TamilRockers Right on the Release Day. The Disney animated classic ‘The Lion King’ live-action movie, that released this Friday, has already been leaked online by piracy website TamilRockers and according to reports, the print is in HD. 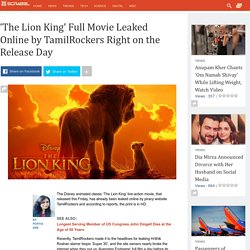 Recently, TamilRockers made it to the headlines for leaking Hrithik Roshan starrer biopic ‘Super 30’, and the site owners nearly broke the internet when they put up ‘Avengers Endgame’ full film a day before its release. Sources say, the live-action animation movie has been leaked in two languages, English and Hindi. ‘The Lion King’ is currently running in India in four languages, the original English and the other dubbed versions, Hindi, Tamil and Telugu.

G Suite Helping Organizations to Enhance Productivity with Cloud Search. Through Cloud search, Google has made it easier to find out information in your Organization which you may be looking for while using Google services like Gmail, G Suite, Drive and so on. Google invested in new cloud-based technology like Machine Learning to enhance the power of Web search. It harnesses the business through technology for searching internal information of the organization. In Several Companies, Cloud search is used for moving data and other workloads to the cloud. Coffee King- V G Siddhartha’s Body Discovered by Local Fishermen Near Shores. Café Coffee Day founder- V G Siddhartha’s body has been finally found this morning near Ullal, Mangaluru. The body was washed ashore the Netravati River and it was traced around 6:30 in the morning by the local fishermen in that area. Setup Forwarding from G Suite Admin Console. Step 1: Creation of Organisational Unit (OU) -- Kindly go to admin console admin.google.com and log in with super admin rights. -- Click on Users >> on the right side next to the domain name >> click on the drop down and select the option Add Sub OU.

Adobe Teams up with NVIDIA to Optimize AI, ML. Nasdaq-listed Adobe is now teaming up with another Nasdaq-listed company- NVIDIA, to aggressively strengthen and enhance their industry-leading artificial intelligence (AI) and deep learning technologies. Interestingly, the two companies have been working together for more than a decade now towards enabling GPU acceleration for a broad set of former’s creative and digital experience products. In the new scheme of things, Adobe and NVIDIA will be working to optimize the Adobe Sensei AI and machine learning (ML) framework for NVIDIA GPUs. The partnership between the two tech biggies will speed time to market and improve performance of new Sensei-powered services for Adobe Creative Cloud and Experience Cloud customers and developers, top company officials said. The two companies have also firmed up plans to work jointly on optimizing Sensei AI services for NVIDIA hardware in the cloud and at the edge, for improved performance and new capabilities.

Entertainment. Partner. Artificial Intelligence Suite - Generative Adversarial Network (GAN) Using Neural Network, Deep Learning and Reinforcement Learning. Amongst all advancements, science and technology have ushered upon mankind, artificial intelligence (AI) is the ultimate, the world reckons with. The highly accelerated velocity at which AI is growing, new breakthroughs have become a regular practice. One of the terminologies of AI suite gaining prominence in recent days is Generative Adversarial Network (GAN). Manage Your Large Organizational Database with Google Cloud Spanner. Google Cloud Spanner is a distributed Relational Database management service that basically runs on Google Cloud. How is Sentiment Analysis Helping Clients in Knowing Their Customers Better? Sentiment analysis is otherwise called passionate man-made reasoning and emotion mining. Google Assistant. Activate MDM in O365. Mobile device management is a crucial part of a mailing solution to detect the activity and control the devices associated with Business or Official email Id 's.