The principles and values of the NHS in England. Patients, public and staff have helped develop this expression of values that inspire passion in the NHS, and that should underpin everything it does. 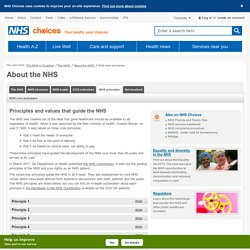 Individual organisations will develop and build upon these values, tailoring them to their local needs. NHS England » NHS England Call to Action. In July NHS England published ‘The NHS belongs to the people: a call to action’ to mark the 65th anniversary of the NHS. 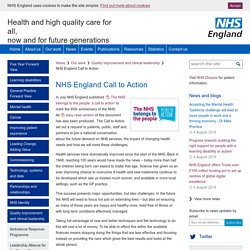 An easy read version of this document has also been produced. The Call to Action set out a request to patients, public, staff and partners to join a national conversation about the future demand on NHS services, the impact of changing health needs and how we will meet these challenges. Health services have dramatically improved since the start of the NHS. Back in 1948, reaching 100 years would have made the news – today more than half the children being born can expect to make that age. Science has given us an ever improving chance to overcome ill health and new treatments continue to be developed which see us treated much sooner, and available in more local settings, such as the GP practice.

This success presents major opportunities, but also challenges. Taking full advantage of new and better techniques and the technology to do this will cost a lot of money. Online. Five big issues for health and social care after the Brexit vote. Issue 1 – staffing The EU’s policy of freedom of movement and mutual recognition of professional qualifications within the EU means that many health and social care professionals currently working in the UK have come from other EU countries. 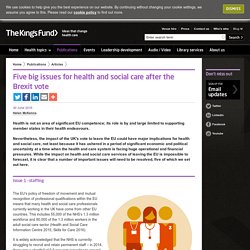 This includes 55,000 of the NHS’s 1.3 million workforce and 80,000 of the 1.3 million workers in the adult social care sector (Health and Social Care Information Centre 2015; Skills for Care 2016). It is widely acknowledged that the NHS is currently struggling to recruit and retain permanent staff – in 2014, there was a shortfall of 5.9 per cent (equating to around 50,000 full-time equivalents) between the number of staff that providers of health care services said they needed and the number in post, with particular gaps in nursing, midwifery and health visitors (National Audit Office 2016).

Similar problems exist in the social care sector, which has an estimated vacancy rate of 5.4 per cent, rising to 7.7 per cent in domiciliary care services. What would Brexit mean for the NHS, social care and disabled people? Alongside the economy and immigration, the NHS has emerged as a key battleground in the EU debate. 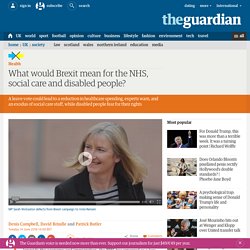 That is because the leave campaign decided early on to deploy the health service as a core argument in their plea to voters. Leave leaders Boris Johnson and Michael Gove have said consistently since campaigning began in April that Brexit could free up up to £8bn extra a year to spend on the NHS. 5yfv easy read. CFNC.org - Career Profile. Insider Info Pathology is a branch of medicine that studies disease. 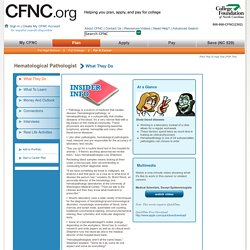 Hematological pathology, or hematopathology, is a subspecialty that studies diseases of the blood. It's a very narrow field with a big impact on the medical community. These physicians are experts in diagnosing leukemia, lymphoma, anemia, hemophilia and many other blood-borne diseases. Like other pathologists, hematological pathologists read, interpret and are responsible for the accuracy of laboratory test results. "Say you go for a routine blood test in the hospital for anemia -- if there's anything abnormal we review them," says hematopathologist Lois Shepherd. Reviewing blood samples means looking at them under a microscope, then recommending or conducting further diagnostic tests.

"If we have something we know is malignant, we analyze it and that gives us a clue as to what kind of disease the person has," explains Dr. Some of a hematopathologist's duties change depending on the workplace. Authorities and trusts - The NHS in England. In 2013 the NHS underwent a fundamental restructure. 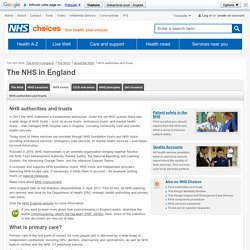 Under the old NHS system there was a wide range of NHS trusts – such as acute trusts, ambulance trusts, and mental health trusts – that managed NHS hospital care in England, including community care and mental health services. Today most of these services are provided through NHS foundation trusts and NHS trusts providing ambulance services, emergency care services, or mental health services – see below for more information. Founded in 2016, NHS Improvement is an umbrella organisation bringing together Monitor, the NHS Trust Development Authority, Patient Safety, the National Reporting and Learning System, the Advancing Change Team, and the Intensive Support Teams.

It oversees and supports NHS foundation trusts, NHS trusts and independent providers delivering NHS-funded care. If necessary, it holds them to account – for example, putting trusts on special measures. Read more about NHS Improvement. What is primary care? Health systems and services: the role of acute care. Primary Care Commissioning. After a lengthy legislative process that saw the Health and Social Care Act 2012 become law. 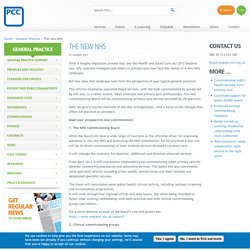 GPs, practice managers and others in primary care now face the reality of a new NHS landscape. But how does that landscape look from the perspective of your typical general practice? The reforms emphasise outcomes based services, with the bulk commissioned by groups led by GPs and, to a lesser extent, other clinicians and primary care professionals. The NHS Commissioning Board will be commissioning primary care services provided by GP practices. Here we give a concise overview of the new arrangements, with a focus on the changes that affect GP practices as providers. Meet your prospective new commissioners 1. The structure of the NHS in England. News: Royal Bournemouth to be main A&E hospital. Image copyright RBCH Royal Bournemouth Hospital has been recommended as the main emergency hospital for Dorset. 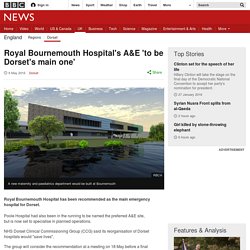 Poole Hospital had also been in the running to be named the preferred A&E site, but is now set to specialise in planned operations. NHS Dorset Clinical Commissioning Group (CCG) said its reorganisation of Dorset hospitals would "save lives". The group will consider the recommendation at a meeting on 18 May before a final decision next year. Under the plans, the number of beds at Bournemouth would increase from 670 to 1,100, there would be a new maternity and paediatrics department and 2,000 extra staff but 45,000 routine operations a year would move from Bournemouth to Poole. Ranking Web of Hospitals. About the National Health Service (NHS) in England. 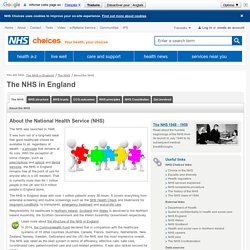 It was born out of a long-held ideal that good healthcare should be available to all, regardless of wealth – a principle that remains at its core. National Health Service. The official logo of the NHS. 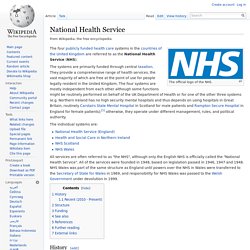 The four publicly funded health care systems in the countries of the United Kingdom are referred to as the National Health Service (NHS). The systems are primarily funded through central taxation. They provide a comprehensive range of health services, the vast majority of which are free at the point of use for people legally resident in the United Kingdom. The four systems are mostly independent from each other although some functions might be routinely performed on behalf of the UK Department of Health or for one of the other three systems (e.g.