How Emotional Freedom Technique Can Help You Fight Cancer. You may know that stress reduction is vital to maintaining health and fighting cancer, but just where do you begin to create true emotional health? 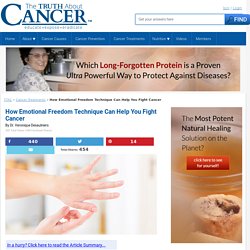 Luckily, you might not have to spend hours in a therapist’s chair in order to heal the emotional wounds that could be standing between you and cancer healing and prevention. Emotional Freedom Technique (also known as EFT or Tapping) is a fast, easy, and effective way to reduce anxiety, clear emotional blocks, and become more peaceful and focused in all areas of your life. The Psychological Side of Cancer Did you know that studies from over twenty years ago indicate that acute or chronic psychological stress can lead to DNA damage? “I searched for cancer in the cell and I have found it in the brain,” said renowned German cancer surgeon Dr. Opschudding in de waarheid over resonantie therapie - Beyond medicine.

Oncology nurse quits after discovering nutrition heals cancer. Frankincense and Cancer - What You Need to Know About This Essential Oil. As they made their iconic trek from the Far East to witness the invaluable gift of the newborn King, the three wise men from the biblical account of Jesus’ birth came bearing their own gifts. 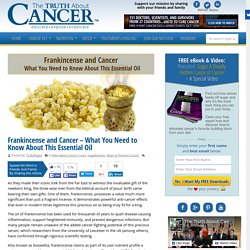 One of them, frankincense, possesses a value much more significant than just a fragrant incense. It demonstrates powerful anti-cancer effects that even in modern times legitimize this precious oil as being truly fit for a king. The oil of frankincense has been used for thousands of years to quell disease-causing inflammation, support heightened immunity, and prevent dangerous infections. But many people remain unaware of the added cancer-fighting potential of this precious serum, which researchers from the University of Leicester in the UK (among others), have confirmed through rigorous scientific testing. Also known as boswellia, frankincense claims as part of its vast nutrient profile a unique compound known as acetyl-11-keto-beta-boswellic acid, or AKBA for short. Thyroid cancer patients report poor quality of life despite 'good' diagnosis. Thyroid cancer survivors report poor quality of life after diagnosis and treatment compared with other patients who are diagnosed with more lethal cancers, according to new research from the University of Chicago Medicine. 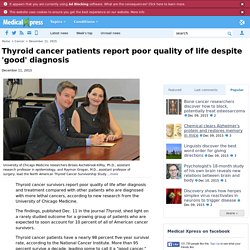 The findings, published Dec. 11 in the journal Thyroid, shed light on a rarely studied outcome for a growing group of patients who are expected to soon account for 10 percent of all of American cancer survivors. Thyroid cancer patients have a nearly 98 percent five-year survival rate, according to the National Cancer Institute. More than 95 percent survive a decade, leading some to call it a "good cancer. " But those successful outcomes mean few thyroid cancer survivorship studies have been conducted. UChicago Medicine researchers Briseis Aschebrook-Kilfoy, PhD, assistant research professor in epidemiology, and Raymon Grogan, MD, assistant professor of surgery, are trying to address that data gap. 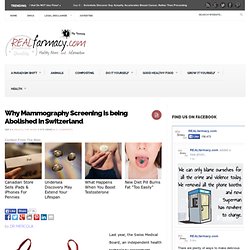 Both Yavli and the website displaying the recommendations may receive compensation as a result of the content being clicked. View our Privacy Policy. by DR. Last year, the Swiss Medical Board, an independent health technology assessment initiative, was asked to prepare a review of mammography screening. After a year of reviewing the available evidence and its implications, they noted they became “increasingly concerned” about what they were finding. On the contrary, mammography appeared to be preventing only one death for every 1,000 women screened, while causing harm to many more. 3 Primary Reasons the Swiss Medical Board Recommended No More Systematic Mammograms 1. 2. 3. “How can women make an informed decision if they overestimate the benefit of mammography so grossly?” Chemicals and Radiation Linked to Breast Cancer.

Help us expose and eliminate the environmental causes of breast cancer.Together we can stop this disease before it starts. 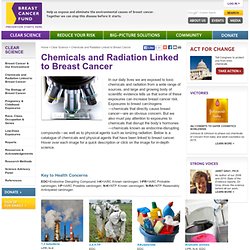 In our daily lives we are exposed to toxic chemicals and radiation from a wide range of sources, and large and growing body of scientific evidence tells us that some of these exposures can increase breast cancer risk. Exposures to breast carcinogens—chemicals that directly cause breast cancer—are an obvious concern. But we also must pay attention to exposures to chemicals that disrupt the body’s hormones—chemicals known as endocrine-disrupting compounds—as well as to physical agents such as ionizing radiation. Below is a catalogue of chemicals and physical agents that have been linked to breast cancer. Hover over each image for a quick description or click on the image for in-depth science. Pleidooi voor biologische kankerbestrijding..