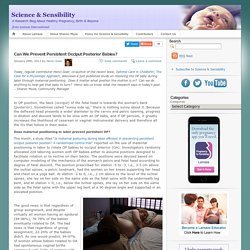 5 Things Your L&D Nurse Wishes You Knew. Early Labour - 8 Tips For A Low Stress Early Labour At Home. During early labour, you might feel a wide range of emotions. 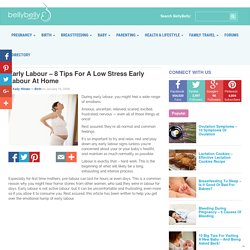 Anxious, uncertain, relieved, scared, excited, frustrated, nervous — even all of those things at once! Rest assured, they’re all normal and common feelings. It’s so important to try and relax, rest and play down any early labour signs (unless you’re concerned about your or your baby’s health), and maintain as much normality as possible. Labour is exactly that – hard work. De beste standjes: geboorteposities tijdens de bevalling. Hormonal Physiology of Childbearing. No Benefit for Fetal ECG Monitoring During Childbirth. 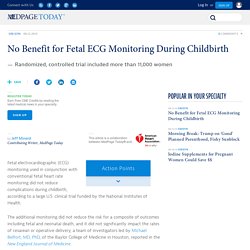 Fetal electrocardiographic (ECG) monitoring used in conjunction with conventional fetal heart rate monitoring did not reduce complications during childbirth, according to a large U.S. clinical trial funded by the National Institutes of Health. The additional monitoring did not reduce the risk for a composite of outcomes including fetal and neonatal death, and it did not significantly impact the rates of cesarean or operative delivery, a team of investigators led by Michael Belfort, MD, PhD, of the Baylor College of Medicine in Houston, reported in the New England Journal of Medicine. "We chose the most severe outcomes to evaluate in this study. FETALNEONATAL : ADC Fetal & Neonatal Edition. Correspondence to Professor Stuart B Hooper, The Ritchie Centre, MIMR-PHI Institute of Medical Research, 27-31 Wright St, Clayton, VIC 3168, Australia; stuart.hooper@monash.edu Received 3 October 2014 Revised 27 November 2014 Accepted 1 December 2014 Published Online First 24 December 2014 Abstract Umbilical cord clamping at birth has a major impact on an infant's cardiovascular system that varies in significance depending upon whether the infant has commenced breathing. 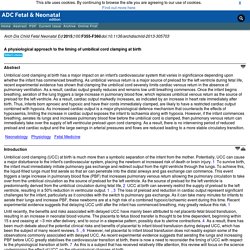 As umbilical venous return is a major source of preload for the left ventricle during fetal life, recent experimental evidence has shown that clamping the umbilical cord severely limits cardiac venous return in the absence of pulmonary ventilation. As a result, cardiac output greatly reduces and remains low until breathing commences.

Introduction. Pitocin Is Not Oxytocin. “The Love Hormone”. 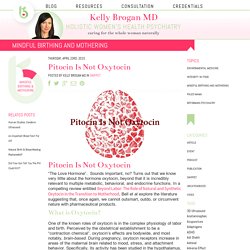 Sounds important, no? Turns out that we know very little about the hormone oxytocin, beyond that it is incredibly relevant to multiple metabolic, behavioral, and endocrine functions. In a compelling review entitled Beyond Labor: The Role of Natural and Synthetic Oxytocin in the Transition to Motherhood, Bell et al explore the literature suggesting that, once again, we cannot outsmart, outdo, or circumvent nature with pharmaceutical products. The 60 Seconds That Could Make a Big Difference in Your Baby’s Health. 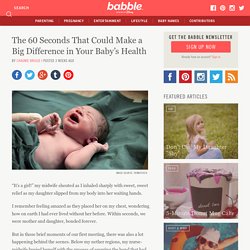 My midwife shouted as I inhaled sharply with sweet, sweet relief as my daughter slipped from my body into her waiting hands. Dailytelegraph.com.au. How One Hospital Brought Its C-Section Rate Down Fast. NEWPORT BEACH, Calif.— Hoag Memorial Hospital Presbyterian, one of the largest and most respected facilities in Orange County, needed to move quickly. 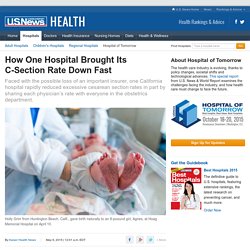 A big insurer had warned that its maternity costs were too high and it might be cut from the plan's network. The reason? Too many cesarean sections. Continuous support for women during childbirth. Continuous support in labour increased the chance of a spontaneous vaginal birth, had no harm, and women were more satisfied. 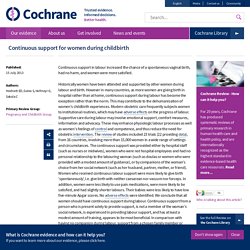 Historically women have been attended and supported by other women during labour and birth. However in many countries, as more women are giving birth in hospital rather than at home, continuous support during labour has become the exception rather than the norm. This may contribute to the dehumanisation of women's childbirth experiences. Modern obstetric care frequently subjects women to institutional routines, which may have adverse effects on the progress of labour. Continuous support for women during childbirth. Mobile.nytimes. Vaginal examinations: a symptom of a cervical-centric birth culture. This post is about routine vaginal examinations (VE) during physiological birth ie. an uncomplicated birth without any medical intervention. 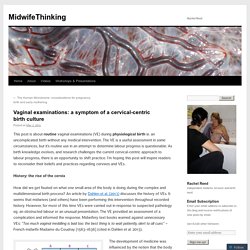 The VE is a useful assessment in some circumstances, but it’s routine use in an attempt to determine labour progress is questionable. As birth knowledge evolves, and research challenges the current cervical-centric approach to labour progress, there is an opportunity to shift practice. I’m hoping this post will inspire readers to reconsider their beliefs and practices regarding cervixes and VEs. History: the rise of the cervix. Life in the womb (9 months in 4 minutes) HD. When and How to Push: Providing the Most Current Information About Second-Stage Labor to Women During Childbirth Education. CC.NPWF.HPoC.Report-ExecutiveSummary.2015.pdf. CC.NPWF.HPoC.Report-ExecutiveSummary.2015.pdf. Birth from the Baby’s Perspective. Birth from the Baby’s Perspective Edited and updated: March 2013 Picture this… A mother sits holding her newborn son on a postnatal ward during visiting time. 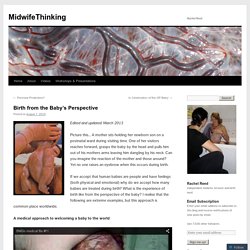 When and How to Push: Providing the Most Current Information About Second-Stage Labor to Women During Childbirth Education. American Obstetrics in the 1950's (to receive the password to this article, simply subscribe to the newsletter: www.evidencebasedbirth.com/newsletter) - Evidence Based Birth - All about pain relief options during labour - Kidspot. Table of Content Pain considerations and variations There’s no denying labour hurts, but how you experience the pain is very individual and can even differ between previous births [1].

While some women are keen to avoid drugs or other medical interventions, others are happy to consider all available options. For a woman having her first baby, the experience of labour (and her reaction to it) is unpredictable [2]. It is therefore important to have a flexible approach when planning how you hope to manage your pain during labour. Cord around the neck – what parents & practitioners should know. This article shares information about the common practice of checking for a nuchal cord during the second stage of labour, and unlooping or cutting the cord – interventions that are not evidence-based and can cause birth trauma. ********Updated Jan, 2012: This article focuses on theories and evidence where routine interventions associated with nuchal cord may be the cause of iatrogenic harm in otherwise-normal birth.

This is distinct from cases where umbilical cord entanglement or cord constriction may be the cause of pathological outcomes during gestation, development, progression/descent during labour and birth. It is important women are informed about nuchal cord ‘management’ in vaginal birth and how it may affect their baby. Information in this article may assist with birth planning; promote discussion with care providers and birth support; and help to avoid iatrogenic injury.

8 Reasons To WAIT Before Cutting Baby's Umbilical Cord. After seeing that gorgeous, pink slippery baby being placed on your chest, the last thing on your mind is what’s going on with the cord and placenta. But there are some really big, evidence-based reasons why you need to be clear about what happens to your baby’s cord and placenta. Delayed cord clamping (which really should be normal cord clamping, since immediate cutting is a premature act) offers some massive health benefits to your baby, but many doctors and hospitals are yet to implement delayed cord clamping as standard practice as they just don’t want to wait. Here’s why you should insist that your caregiver should wait before cutting your baby’s cord. Reason NOT To Cut The Cord #1: Your Baby Will Have 32% More Blood Volume. Evidence Based Birth Evidence for using Moxibustion to turn Breech Babies - Evidence Based Birth. November 11, 2013 by Rebecca Dekker, PhD, RN, APRN © Copyright Evidence Based Birth.

Please see disclaimer and terms of use. Approximately 3-4% of babies are in a breech position (bottom-down) at the end of pregnancy. Most women who have a baby in breech positioning have limited options for how they can give birth, with the majority (90% in the U.S.) giving birth by Cesarean. Childbirth All or Nothing BBC Documentary 2015. Birth from the Baby’s Perspective.