Malala Yousafzai for Kids. Biography>> Women Leaders >> Civil RightsOccupation: Human Rights ActivistBorn: July 12, 1997 in Mingora, PakistanBest known for: Fighting for the rights of women to receive an education in PakistanBiography: Where did Malala Yousafzai grow up? 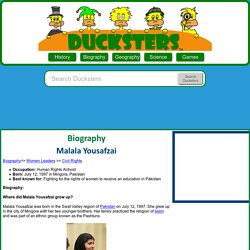 Malala Yousafzai was born in the Swat Valley region of Pakistan on July 12, 1997. She grew up in the city of Mingora with her two younger brothers. Her family practiced the religion of Islam and was part of an ethnic group known as the Pashtuns. Malala Yousafzai from the White House Her Father's Schools Malala's early childhood was one of happiness and peace. Malala loved learning and going to school. The Taliban Take Control Around the time Malala was ten years old, the Taliban began to take over the region where she lived. Girls Schools are Shut Down As the Taliban gained more control, they began to enforce new laws. Writing a Blog Malala soon became famous for writing her blog. Getting Shot The Taliban were not happy with Malala. Recovery. Biography for Kids: Princess Diana. More Biographies Occupation: Princess Born: July 1, 1961 in Norfolk, England Died: August 31, 1997 in Paris, France Best known for: Becoming Princess of Wales when she married Prince Charles Nickname: Lady Di Princess DianaSource: US Federal Government Biography: Where did Princess Diana grow up? 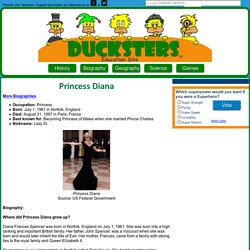 Diana Frances Spencer was born in Norfolk, England on July 1, 1961. She was born into a high ranking and important British family. Diana grew up on a large estate in Norfolk called Park House. School At school Diana excelled in athletics, music, and art. Early Life When Diana turned 18 she moved into an apartment with three of her friends. Diana and Prince CharlesSource: Ronald Reagan Library Meeting Prince Charles Diana had first met Prince Charles when she was sixteen years old.

A Huge Wedding On February 6, 1981 the prince asked Lady Diana to marry him. Princess of Wales Diana was now the Princess of Wales. Heir to the Throne Divorce Charity Death Interesting Facts about Princess Diana. Hillary Clinton for Kids. Biography>> Women Leaders Occupation: Politician Born: October 26, 1947 in Chicago, Illinois Best known for: Presidential candidate and wife of President Bill ClintonBiography: Hillary Clinton is one of the most prominent American politicians of the 2000s. 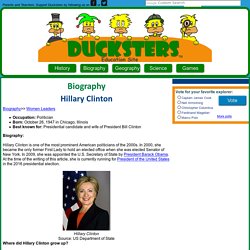 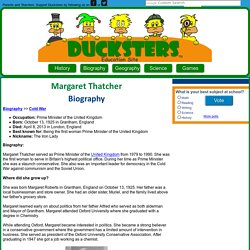 She was the first woman to serve in Britain's highest political office. During her time as Prime Minister she was a staunch conservative. She also was an important leader for democracy in the Cold War against communism and the Soviet Union. Where did she grow up? She was born Margaret Roberts in Grantham, England on October 13, 1925. Margaret learned early on about politics from her father Alfred who served as both alderman and Mayor of Grantham. While attending Oxford, Margaret became interested in politics. Margaret Thatcher by Marion S. Margaret Enters Politics A few years later Margaret tried running for office for the first time. Prime Minister. Kid's Biography: Mohandas Gandhi. Biography for Kids Mohandas Gandhiby Unknown Occupation: Civil Rights LeaderBorn: October 2, 1869 in Porbandar, IndiaDied: January 30, 1948 in New Delhi, IndiaBest known for: Organizing non-violent civil rights protestsBiography: Mohandas Gandhi is one of the most famous leaders and champions for justice in the world. 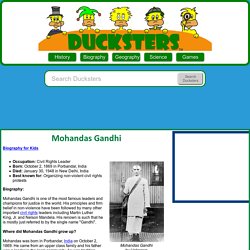 His principles and firm belief in non-violence have been followed by many other important civil rights leaders including Martin Luther King, Jr. and Nelson Mandela. His renown is such that he is mostly just referred to by the single name "Gandhi". Where did Mohandas Gandhi grow up? Mohandas was born in Porbandar, India on October 2, 1869. Mohandas' parents wanted him to become a barrister, which is a type of lawyer. What did Gandhi do? Once back in India, Gandhi led the fight for Indian independence from the British Empire. Gandhi was put in prison several times for organizing these protests. One of Gandhi's most successful protests was called the Salt March. Works Cited. Kid's Biography: Nelson Mandela. 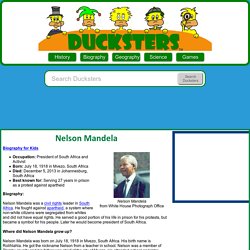 He fought against apartheid, a system where non-white citizens were segregated from whites and did not have equal rights. He served a good portion of his life in prison for his protests, but became a symbol for his people. Where did Nelson Mandela grow up? Nelson Mandela was born on July 18, 1918 in Mvezo, South Africa. What did Nelson Mandela do?