Bilinguals of Two Spoken Languages Have More Gray Matter Than Monolinguals. WASHINGTON (July 16, 2015) — A new study published in the journal Cerebral Cortex suggests people who speak two languages have more gray matter in the executive control region of the brain. 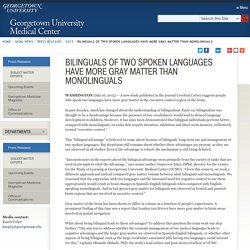 In past decades, much has changed about the understanding of bilingualism. Early on, bilingualism was thought to be a disadvantage because the presence of two vocabularies would lead to delayed language development in children. However, it has since been demonstrated that bilingual individuals perform better, compared with monolinguals, on tasks that require attention, inhibition and short-term memory, collectively termed “executive control.”

This “bilingual advantage” is believed to come about because of bilinguals’ long-term use and management of two spoken languages. But skepticism still remains about whether these advantages are present, as they are not observed in all studies. Age of language learning shapes brain structure: A cortical thickness study of bilingual and monolingual individuals. Speaking foreign languages may help protect your memory. People who speak more than two languages may lower their risk of developing memory problems, according to a study released today that will be presented at the American Academy of Neurology's 63rd Annual Meeting in Honolulu April 9 to April 16, 2011. 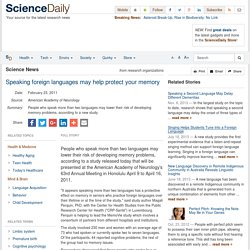 "It appears speaking more than two languages has a protective effect on memory in seniors who practice foreign languages over their lifetime or at the time of the study," said study author Magali Perquin, PhD, with the Center for Health Studies from the Public Research Center for Health ("CRP-Santé") in Luxembourg. Perquin is helping to lead the MemoVie study which involves a consortium of partners from different hospitals and institutions. SAGE Journals: Your gateway to world-class journal research. Language learning aids attention, study says. Mental agility can be boosted by even a short period of learning a language, a study suggests. 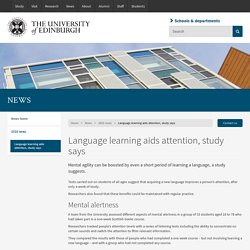 Tests carried out on students of all ages suggest that acquiring a new language improves a person’s attention, after only a week of study. Researchers also found that these benefits could be maintained with regular practice. Mental alertness A team from the University assessed different aspects of mental alertness in a group of 33 students aged 18 to 78 who had taken part in a one-week Scottish Gaelic course. Researchers tracked people’s attention levels with a series of listening tests including the ability to concentrate on certain sounds and switch the attention to filter relevant information.