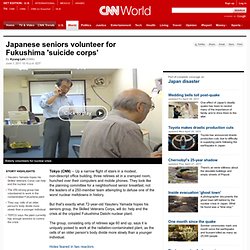 They look like the planning committee for a neighborhood senior breakfast, not the leaders of a 250-member team attempting to defuse one of the worst nuclear meltdowns in history. Fukushima's tsunami plan was a single page - Japan Earthquake. Japanese nuclear regulators trusted that the reactors at Fukushima Dai-ichi were safe from the worst waves an earthquake could muster based on a single-page memo from the plant operator nearly a decade ago. 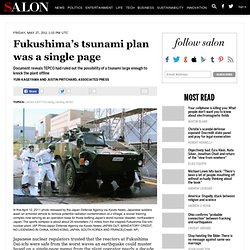 In the Dec. 19, 2001 document — one double-sized page obtained by The Associated Press under Japan’s public records law — Tokyo Electric Power Co. rules out the possibility of a tsunami large enough to knock the plant offline and gives scant details to justify this conclusion, which proved to be wildly optimistic. Regulators at the Nuclear and Industrial Safety Agency, or NISA, had asked plant operators for assessments of their earthquake and tsunami preparedness. They didn’t mind the brevity of TEPCO’s response, and apparently made no moves to verify its calculations or ask for supporting documents. “This is all we saw,” said Masaru Kobayashi, who now heads NISA’s quake-safety section. Letters From Fukushima: Tepco Worker Emails - Japan Real Time.

Robots Arrive at Fukushima Nuclear Site with Unclear Mission. As workers race to stave off further melting at the Fukushima Daiichi nuclear reactors in Japan, several robots there are waiting on the sidelines for an opportunity to help. 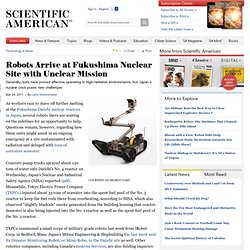 Questions remain, however, regarding how these units might assist in an ongoing emergency at a site contaminated with radiation and deluged with tons of corrosive seawater. Concrete pump trucks sprayed about 130 tons of water into Daiichi's No. 4 reactor on Wednesday, Japan's Nuclear and Industrial Safety Agency (NISA) reported (pdf). Meanwhile, Tokyo Electric Power Company (TEPCo) injected about 35 tons of seawater into the spent fuel pool of the No. 3 reactor to keep the fuel rods there from overheating, according to NISA, which also observed "slightly blackish" smoke generated from the building housing that reactor.

New Problems Arise at Japanese Nuclear Plant. IAEA chief to head to Japan to face nuclear crisis. Hirose Takashi: What They're Covering Up at Fukushima. "You Get 3,500,000 the Normal Dose. 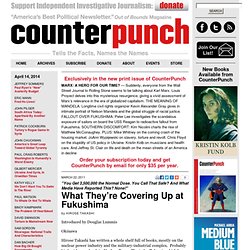 You Call That Safe? And What Media Have Reported This? None! " Introduced by Douglas Lummis Okinawa Hirose Takashi has written a whole shelf full of books, mostly on the nuclear power industry and the military-industrial complex. He did the TV interview that is partly translated below somewhat against his present impulses. Nuclear crisis: How safe is Japan's food and water? - health - 21 March 2011. Alerts have been issued on radiation levels in Japanese milk, spinach, leeks and tap water. 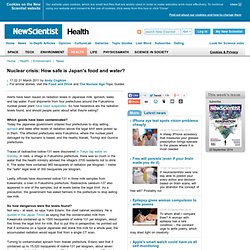 Fukushima Engineer Says He Covered Up Flaw at Shut Reactor. One of the reactors in the crippled Fukushima nuclear plant may have been relying on flawed steel to hold the radiation in its core, according to an engineer who helped build its containment vessel four decades ago. 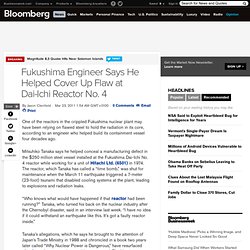 Mitsuhiko Tanaka says he helped conceal a manufacturing defect in the $250 million steel vessel installed at the Fukushima Dai-Ichi No. 4 reactor while working for a unit of Hitachi Ltd. (6501) in 1974. The reactor, which Tanaka has called a “time bomb,” was shut for maintenance when the March 11 earthquake triggered a 7-meter (23-foot) tsunami that disabled cooling systems at the plant, leading to explosions and radiation leaks. “Who knows what would have happened if that reactor had been running?” Tanaka, who turned his back on the nuclear industry after the Chernobyl disaster, said in an interview last week.

“I have no idea if it could withstand an earthquake like this. A file photograph shows employees and inspectors from the International Atomic Energy... Close. Fukushima radioactive fallout nears Chernobyl levels - health - 24 March 2011. Video: Radioactive plume from Japanese reactor Read more: "Special report: The fallout from Fukushima" Japan's damaged nuclear plant in Fukushima has been emitting radioactive iodine and caesium at levels approaching those seen in the aftermath of the Chernobyl accident in 1986. 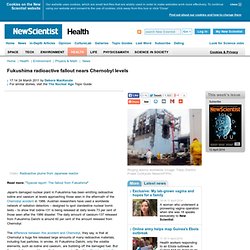 Austrian researchers have used a worldwide network of radiation detectors – designed to spot clandestine nuclear bomb tests – to show that iodine-131 is being released at daily levels 73 per cent of those seen after the 1986 disaster. The daily amount of caesium-137 released from Fukushima Daiichi is around 60 per cent of the amount released from Chernobyl. The difference between this accident and Chernobyl, they say, is that at Chernobyl a huge fire released large amounts of many radioactive materials, including fuel particles, in smoke. Ill wind The agreement between the two "makes us confident that this is accurate", he says. "This is not surprising," says Wotawa. Dangerous isotopes.