Whole System Thinking. New NASA data show how the world is running out of water. The world’s largest underground aquifers – a source of fresh water for hundreds of millions of people — are being depleted at alarming rates, according to new NASA satellite data that provides the most detailed picture yet of vital water reserves hidden under the Earth’s surface. 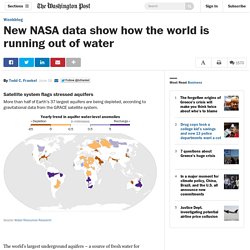 Twenty-one of the world’s 37 largest aquifers — in locations from India and China to the United States and France — have passed their sustainability tipping points, meaning more water was removed than replaced during the decade-long study period, researchers announced Tuesday. Thirteen aquifers declined at rates that put them into the most troubled category. The researchers said this indicated a long-term problem that’s likely to worsen as reliance on aquifers grows. China’s New Airstrip in the South China Sea Is Almost Completed. China is close to completing the construction of an airstrip on a tiny outcrop in the South China Sea, heightening its ability to project power regionally from the disputed waters and further raising the stakes in an increasingly tense showdown between Beijing, its neighbors, and the United States. 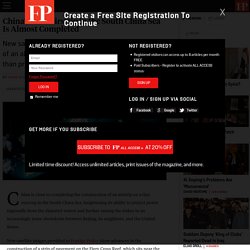 Over population, over consumption - in pictures. Movie: Rachel Armstrong on giant synthetic reef to stop Venice sinking. Growing a "giant artificial reef" could stop Venice sinking Dezeen and MINI Frontiers: in the second part of our interview with Rachel Armstrong, the senior University of Greenwich lecturer explains how a synthetic "limestone-like" support structure could be grown underneath Venice to prevent the city's foundations being eroded. 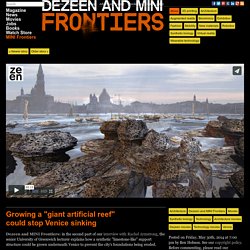 "The future of Venice really rests on its relationship with the tides," Armstrong explains. "They digest away the fabric of the city. The idea is to create a giant artificial limestone-like reef. This would spread the point load of the city over a much broader base. " Armstrong says such a structure could be grown using protocell technology, an emerging field of synthetic biology, in which cocktails of non-living chemicals are combined to exhibit the properties of living organisms. "What I mean by 'protocell' is a group of chemistries that have a very, very simple metabolism," Armstrong explains. More Dezeen and Mini Frontiers: Amazon. Nanotech, terraforming, geoengineering – facts and fictions entangled.

I have, I reckon, a pretty good grip on the distinction between science fiction and reality. 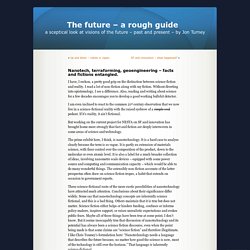 I read a lot of non-fiction along with my fiction. Without diverting into epistemology, I see a difference. Also, reading and writing about science for a few decades encourages you to develop a good working bullshit detector. I am even inclined to react to the common 21st century observation that we now live in a science-fictional reality with the raised eyebrow of a simple soul pedant. If it’s reality, it ain’t fictional. But working on the current project for NESTA on SF and innovation has brought home more strongly that fact and fiction are deeply interwoven in some areas of science and technology. Terraforming Earth. The environmental left, futurist Stewart Brand argues in Whole Earth Discipline, needs to view the world afresh. 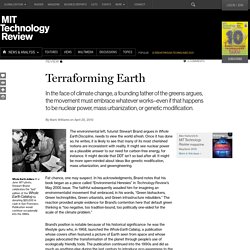 Once it has done so, he writes, it is likely to see that many of its most cherished notions are inconsistent with reality. It might see nuclear power as a plausible answer to our need for carbon-free energy, for instance. It might decide that DDT isn’t so bad after all. It might be more open-minded about ideas like genetic modification, mass urbanization, and geoengineering. Fat chance, one may suspect. American Anthropological Association Statement on Humanity and Climate Change. The Anthropocene Explosion. We have entered the Anthropocene epoch, in which humanity and its instrumentalities are the most potent and influential geological force. 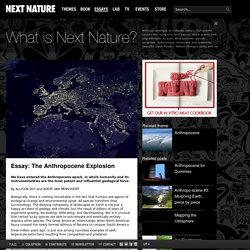 By ALLISON GUY and KOERT VAN MENSVOORT Biologically, there is nothing remarkable in the fact that humans are agents of ecological change and environmental upset. All species transform their surroundings. The dizzying complexity of landscapes on Earth is not just a happy accident of geology and climate, but the result of billions of years of organisms grazing, excavating, defecating, and decomposing. Nor is it unusual that certain lucky species are able to outcompete and eventually entirely displace other species.

Panel Urges Research on Geoengineering as a Tool Against Climate Change. Synchronicity and Scale in the Logic of the Anthropocene ~ AmericanScience: A Team Blog. Welcome to the Anthropocene: Anthropology and the Political Moment  We live in very troubled times -- welcome to the Anthropocene, a new epoch during which human activity (industrial production and consumption) has provided us unparalleled wealth but also an unmistakable path toward potential ecological devastation. 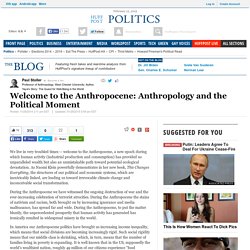 As Naomi Klein powerfully demonstrates in her new book, This Changes Everything, the structures of our political and economic systems, which are inextricably linked, are leading us toward irrevocable climate change and inconceivable social transformation. During the Anthropocene we have witnessed the ongoing destruction of war and the ever-increasing celebration of terrorist atrocities. During the Anthropocene the stains of nativism and racism, both brought on by increasing ignorance and media malfeasance, has spread far and wide. During the Anthropocene, to put the matter bluntly, the unprecedented prosperity that human activity has generated has ironically resulted in widespread misery in the world. Something has got to give. 1. Prof Bruno Latour - The Anthropocene and the Destruction of the Image of the Globe. The Anthropocene Project. An Encyclopedia. Rethinking the unthinkable. Earlier today, the American National Academies published their much-anticipated report on geoengineering. 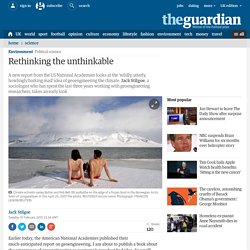 I am about to publish a book about the emergence of geoengineering as everyone’s new best bad idea. The invisible network that keeps the world running. It’s been just over 45 years since the Apollo Moon landings, and some would have it that we are failing to build big anymore; that we've since become too fascinated with the small, too impressed by our tablet computers, games consoles, and smartphones that we don't invest in grand, world-changing engineering projects. 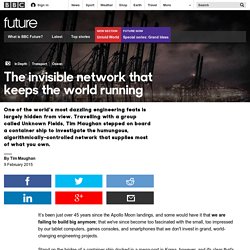 Stand on the bridge of a container ship docked in a mega-port in Korea, however, and it's clear that's just not true. The global supply chain that brings us those tablets and phones, and pretty much everything else from our clothes and food to our toys and souvenirs, is nothing short of a moon shot itself – a vast, unprecedented engineering solution to a truly astronomical logistics problem. Donna Haraway, "Anthropocene, Capitalocene, Chthulucene: Staying with the Trouble", 5/9/14. The Anthropocene Review. Ursula Biemann: Art in the Anthropocene. Subcomission on Quaternary Stratigraphy, ICS » Working Groups. 15.1.2015 Article in the Berlin daily newspaper Der Tagesspiegel - Anthropozän : Fallout und Plastik markieren das Menschenzeitalter. 16.1.2015 Article in the München (Munich) daily newspaper Süddeutsche Zeitung - Am Limit (At the limit). 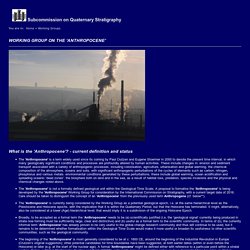 For instance, academics still aren’t agreed on a start date for the epoch. A recent article published by the Anthropocene Working Group, suggests that the first nuclear test at Los Alamos in 1945 should be used as the milestone. Welcome to the Anthropocene. Climate Change — The state of the science. Geological_time_spiral.png (PNG Image, 2424 × 2145 pixels) - Scaled (42%) Terraforming Earth : Fast Search Results : Open the Future. 11 result(s) displayed (1 - 11 of 11): Terraforming the Earth, Taken Seriously It's amazing what can happen in five years. Governance in the Anthropocene, a SXSW Proposal. Forest Futures in the Anthropocene: Can Trees and Humans Survive Together? Member of the U.S. Forest Service's Burned Area Emergency Response (BAER) assessment team examines damage in a 2013 fire in the Santa Fe National Forest, New Mexico. By David Bengston and Michael J.

Dockry Threats to forests range from mega-fires to urban encroachment. Foresters and futurists share a long-range perspective. Dawn of the Anthropocene Epoch? Earth has entered new age of geological time, experts say. Geologists from the University of Leicester are among four scientists- including a Nobel prize-winner -- who suggest that Earth has entered a new age of geological time. A Sandbox for the Anthropocene. Chaim Gingold/Earth Primer Too often, we specialize. But we don’t have to. Anthropocene: We might be about to move from the Holocene to a new epoch - Science - News - The Independent.