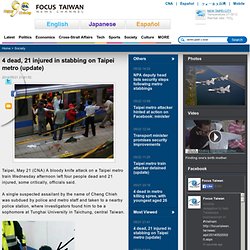 A single suspected assailant by the name of Cheng Chieh was subdued by police and metro staff and taken to a nearby police station, where investigators found him to be a sophomore at Tunghai University in Taichung, central Taiwan. [The suspect Cheng Chieh is seen sitting on the floor in this image captured from a video clip shot by a bystander following the stabbing.] The attack happened at around 4:25 p.m. on the Bannan (blue) line, inside a train heading west between Longshan Temple Station in Taipei and Jiangzicui Station in New Taipei. The four fatally injured victims were a woman aged 47, another woman aged 62, a man aged 20 and another man aged 30, according to officials. A high school student surnamed Chuang said she was on the platform at Jiangzicui when the train pulled up. "I'm so scared, help me! " Taiwan marines conduct drill in Spratlys: lawmaker. Taipei, April 28 (CNA) Taiwan's marines, escorted by a fleet of Navy frigates, conducted a military drill in the disputed Spratly Archipelago in the South China Sea earlier this month, a Kuomintang (KMT) lawmaker disclosed Monday, saying it was an effective move to protect Taiwan's sovereignty. 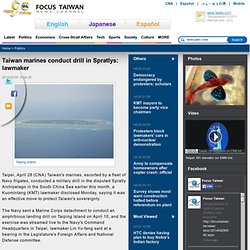 The Navy sent a Marine Corps detachment to conduct an amphibious landing drill on Taiping Island on April 10, and the exercise was streamed live to the Navy's Command Headquarters in Taipei, lawmaker Lin Yu-fang said at a hearing in the Legislature's Foreign Affairs and National Defense committee. Lin said he was among the lawmakers invited to watch the drill at the Navy headquarters. The participating marines and weapons were transported to Taiping by a fleet of Navy vessels, including the Chengkung-class and Lafayette-class frigates and landing craft, Lin said.

During the drill, marines in more than 20 assault vehicles launched an amphibious landing on the shores of Taiping, he said. Taiwan Crisis Mirrors Ukraine. On March 18, Taiwanese student protestors took over the Legislative Yuan assembly hall in Taipei, Taiwan, and have been camped out there ever since. 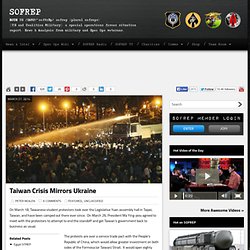 On March 26, President Ma Ying-jeou agreed to meet with the protestors to attempt to end the standoff and get Taiwan’s government back to business as usual. The protests are over a service trade pact with the People’s Republic of China, which would allow greater investment on both sides of the Formosa (or Taiwan) Strait. It would open eighty percent of China’s service sectors to Taiwan, and sixty-four percent of Taiwan’s to China. Thousands Protest Taiwan's Trade Pact With China. Taiwanese Occupy Legislature Over China Pact. Our democracy must not die — Taiwan Now. Protests Add Woes to Formosa Debt as Dim Sum Booms: China Credit.

Protests against closer economic ties with China are threatening to condemn Taiwan’s offshore-yuan debt market to another year in the shadow of Hong Kong’s Dim Sum bonds. 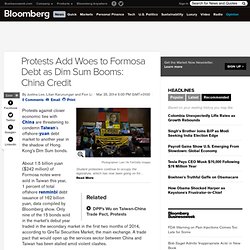 About 1.5 billion yuan ($242 million) of Formosa notes were sold in Taiwan this year, 1 percent of total offshore renminbi debt issuance of 162 billion yuan, data compiled by Bloomberg show. Taiwan’s Heavy-handed Crackdown on #CongressOccupied Leaves Protesters, Journalists Injured. Protesters in Taiwan are speaking out against what they call a violent suppression of a peaceful demonstration outside the island's government headquarters on March 23, 2014 that left protesters, doctors and journalists injured. 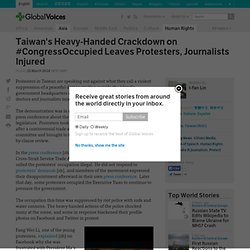 The demonstration was in response to President Ma Ying-jeou's first press conference about the ongoing occupation of Taiwan's legislature. Protesters took over the Legislative Yuan on March 18 after a controversial trade agreement with China was passed in committee and brought to the floor without a promised clause-by-clause review. In the press conference [zh], Ma reiterated the importance of the Cross-Strait Service Trade Agreement for Taiwan's economy and called the protesters’ occupation illegal. He did not respond to protesters’ demands [zh], and members of the movement expressed their disappointment afterward in their own press conference.

Grandia0220: これが今の台湾です。 警察は紋章も付けず市民を足で踏みつける... Clashes as Taiwan students storm government HQ. 24 March 2014Last updated at 05:06 GMT Cindy Sui reports from inside the occupied parliament building in Taiwan Taiwanese police have clashed with hundreds of students who occupied government headquarters to protest at a trade deal with China. 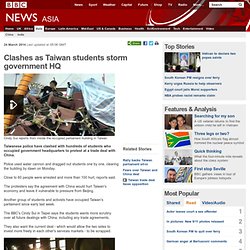 Police used water cannon and dragged out students one by one, clearing the building by dawn on Monday. Close to 60 people were arrested and more than 100 hurt, reports said. Taiwan: Protesters Cleared From Government Headquarters. Taiwan Stands Behind Use of Force Against Protesters. TAIPEI, Taiwan — Taiwan’s prime minister said on Monday that the government had been justified in using force to remove demonstrators from the cabinet building earlier in the day, as students continued to occupy the nearby legislature in a protest against a trade bill with China. 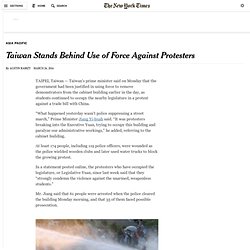 “What happened yesterday wasn’t police suppressing a street march,” Prime Minister Jiang Yi-huah said. “It was protesters breaking into the Executive Yuan, trying to occupy this building and paralyze our administrative workings,” he added, referring to the cabinet building. At least 174 people, including 119 police officers, were wounded as the police wielded wooden clubs and later used water trucks to block the growing protest.

In a statement posted online, the protesters who have occupied the legislature, or Legislative Yuan, since last week said that they “strongly condemn the violence against the unarmed, weaponless students.” Mr. Ukraine: Why Is China Sitting on the Fence?