New IDF unit to fight enemies on Facebook, Twitter. Unbelievable! The IDF Has Gamified Its War Blog. Yesterday, when I wrote about the social media campaign that Israel was waging alongside its attack on Hamas, I thought it was interesting. 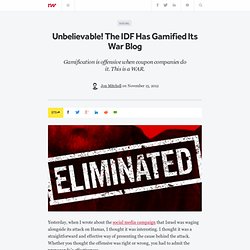 I thought it was a straightforward and effective way of presenting the cause behind the attack. Whether you thought the offensive was right or wrong, you had to admit the propaganda's effectiveness. Well, day two has changed matters. The IDF Blog now has atrocious gamification badges with points and rewards for sharing the content to social media. For example, if you visit the site 10 times, you get the "Consistent" badge. This game has existed since July.

An IDF spokesperson tells ReadWrite that "over the past two days the blog has experienced technical difficulties due to high traffic, and 'IDF Ranks' was temporarily taken down to make necessary adjustments to our systems. The technical reason sounds plausible, although I was on the site pretty early yesterday, and I never saw a trace of it.

IDF leaflet. Israeli Military Tells Citizens To Stop Broadcasting Rocket Attacks Via Social Media. The Israel Defense Forces might be extremely social media-savvy - arguably disturbingly so - but it is asking citizens to stop posting about Hamas rocket attacks on sites like Instagram, Twitter and Facebook. 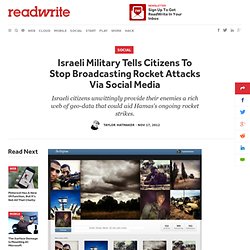 In a press briefing late last week, Israel warned that any social updates embedded with location information or geotagging could aid Hamas’s efforts. Instagram photos of successful strikes and even geotagged tweets and Facebook updates by Israeli citizens could help Hamas home in on Israeli targets. Since the militant group employs relatively crude rocket technology by most standards, aggregated public geo-data could offer a precision otherwise afforded only by more sophisticated equipment - or inadvertently crowdsourced. Social Media, Internet Shutdowns are the Latest Weapons in the Israeli-Palestinian Conflict. Social media war-machine. Certainly, an amount of surprise at the Israeli Defense Forces social media onslaught in the latest assault on Gaza is to be expected. 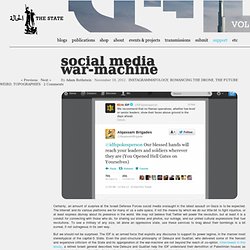 The internet and its various platforms are for many of us a safe space, if not the means by which we do our little bit to fight injustice, or at least express dismay about its presence in the world. We may not believe that Twitter will power the revolution, but at least it is a conduit for connecting with those who do, for sharing our stories and photos, our outrage, and our united cultural expressions that fuel revolutions. To see a military of any size, let alone an oppressive state, use these services to brag about their bombings is a bit surreal, if not outrageous in its own way. But we should not be surprised. The IDF is an armed force that exploits any discourse to support its power regime, in the manner most stereotypical of the capital-S State.

I asked Naveh why Deleuze and Guattari were so popular with the Israeli military. Propaganda 2.0: Why Israel and Hamas are fighting a war with rockets and tweets. Alqassam Brigades. IDF. Israel Attacks Terror Full-Force via Social Media - Defense/Security. Besides attacking Hamas terrorists in Gaza and hampering their ability to harm Israeli civilians, Israel has been fighting Gaza Arab terror on the cyber front. 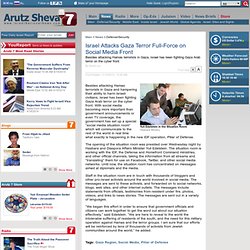 With social media becoming more important than government announcements or even TV coverage, the government has set up a special “social media situation room” which will communicate to the rest of the world in real time what exactly is happening in the new IDF operation, Pillar of Defense. The opening of the situation room was presided over Wednesday night by Hasbara and Diaspora Affairs Minister Yuli Edelstein. How To Wage War On The Internet.

Israel and Hamas wage Twitter war over Gaza conflict. 15 November 2012Last updated at 09:24 ET Twitter is being used in a propaganda war between Israel and Hamas The Israel Defense Forces (IDF) and Palestinian Islamist group Hamas have opened a new front in the propaganda war, via Twitter. 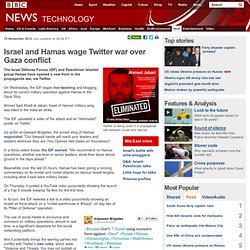 On Wednesday, the IDF began live-tweeting and blogging about its current military operation against Hamas in the Gaza Strip. Ahmed Said Khalil al-Jabari, head of Hamas' military wing, was killed in the initial air strike. Is Hamas winning the Twitter war? Palestinians extinguish a fire after Israeli air strikes in Gaza (Reuters) Today, Israel launched a military strike on Hamas in the Gaza Strip – and a complimentary social media campaign, which has chronicled much of the "Pillar of Defense" operation with polished video and photos. 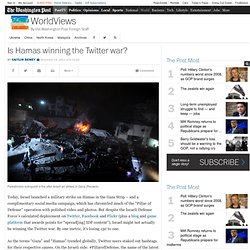 Hamas Shoots Rockets at Tel Aviv, Tweeting Every Barrage. On day one of the fight between Israel and Hamas, the Israeli Defense Forces executed a top leader of the militant group — and took to Twitter and YouTube to brag about it. 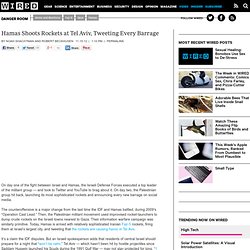 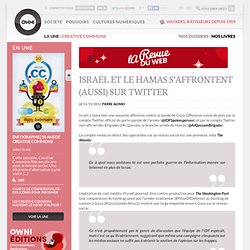