We Should Really Be Talking About Self-Driving Trucks. With so much attention being paid to the development of self-driving cars (including whether Apple is getting into the game), little notice has been given to the prospect of self-driving leviathans of the highway—the long-haul truck. 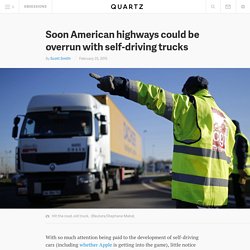 Industry watchers and tech fanboys are salivating at the potential of making their commutes or jumping between meetings in autonomous people-movers, yet, in terms of near-term impact, the self-driving semi could make a bigger splash given the trucking industry contributed $642 billion to the US economy last year. Take the initial significance that self-driving trucks might have on the road: Based on the most recent data (pdf) from the Department of Transportation, there were an estimated 10.7 million trucks operating in the US in 2013, many of which belong to the more than 33,000 commercial fleets on American highways.

Google roads Dr. Uld driverless cars own themselves? 15 February 2015Last updated at 19:04 ET By Leo Kelion Technology desk editor Hollywood's famous Herbie was a VW Beetle with a mind of its own Forget buying an electric-powered Tesla, sharing a Zipcar or hiring an Uber - the most disruptive force in getting from A to B on four wheels could be cars that own themselves. 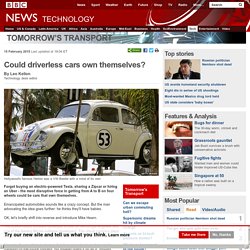 Emancipated automobiles sounds like a crazy concept. Induct - Mobility SolutionsInduct - Mobility Solutions. Earth 2050 - Driven by Design. Back to the Future: The Road to Autonomous Driving. Self-driving cars will set off an economic and cultural earthquake. L.A. Mayor Eric Garcetti: We Will Be the First City to Do Autonomous Vehicles Right. It's no secret that Eric Garcetti has a thing for autonomous vehicles. 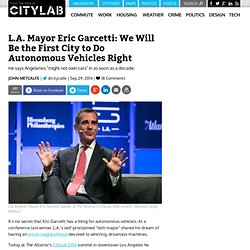 At a conference last winter, L.A.'s self-proclaimed "tech mayor" shared his dream of having an entire neighborhood devoted to whirring, driverless machines. Today at The Atlantic's CityLab 2014 summit in downtown Los Angeles he doubled down on that vision, saying that L.A. "could be the first place really in an urban center where we have autonomous vehicles that are able to be ordered up [like] a car service, right away in a real neighborhood, not just in a protected area. " Garcetti's future-gazing came in the context of the city's ongoing, massive expansion of its transit system. “While we're building out this rail network, we simultaneously should be looking at, I think, bus rapid transit lanes, not because BRTs are [good]—of course they've been proven successful—but because autonomous vehicles are going to be here," he said.

Such bus lanes could come in handy when the age of autonomy arrives, he added. Autonomous vehicles: A powerful tool if you can get the problem right. “When the American people, through their Congress, voted for a twenty-six-billion-dollar highway program, the most charitable thing to assume is that they hadn’t the faintest notion of what they were doing.” 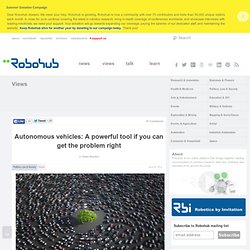 So warned Lewis Mumford in 1958, two years after the inauguration of the U.S. Interstate Highway system. “Within the next fifteen years,” Mumford added, “they will surely find out.” The following decades indeed proved Mumford right. Google's Self-Driving Toaster Is Detroit's Worst Nightmare. Google's surprise reveal of its first in-house self-driving car prototype shook the the auto industry like a California earthquake this week, and quickly became the biggest car news of the year. 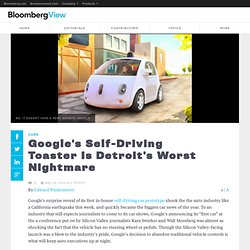 To an industry that still expects journalists to come to its car shows, Google's announcing its "first car" at the a conference put on by Silicon Valley journalists Kara Swisher and Walt Mossberg was almost as shocking the fact that the vehicle has no steering wheel or pedals. Though the Silicon Valley-facing launch was a blow to the industry's pride, Google's decision to abandon traditional vehicle controls is what will keep auto executives up at night. Whether Detroit wants to accept it or not, driverless cars will be the key step forward in the trend away from ownership of cars and toward access to mobility. They herald the end of an industry model built on scale.

This development was not unforeseeable to the auto industry. A City Built to Test Self-Driving Cars Will Open Up Its Streets This Fall. Image: University of Michigan's Mobility Transformation Center The heart of America's beleaguered auto industry will soon be home a 32-acre, multimillion-dollar high-tech transportation experiment. 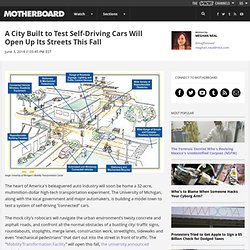 The University of Michigan, along with the local government and major automakers, is building a model town to test a system of self-driving "connected" cars. The mock city’s robocars will navigate the urban environment’s twisty concrete and asphalt roads, and confront all the normal obstacles of a bustling city: traffic signs, roundabouts, stoplights, merge lanes, construction work, streetlights, sidewalks and even "mechanical pedestrians" that dart out into the street in front of traffic. The "Mobility Transformation Facility" will open this fall, the university announced yesterday. “Today reminds me of when I was a young boy and used to watch The Jetsons,” said David Munson, the university’s dean of engineering, in the announcement. Self-Driving Cars: Inside The Road Revolution. In the fall of 2010, Google sprung a surprise on the commuting world: It had developed a fleet of seven “self-piloting” Toyota Prius Hybrids and they had already logged more than 140,000 miles (combined) in the real world, mostly on Highway 1 between San Francisco and Los Angeles.

Each vehicle was powered by unproven artificial intelligence software and outfitted with a sophisticated yet awkward-looking GPS array, detailed mapping software, and optical radar and laser sensors. The car could stay on track, know where it was going, and “see” what was happening around it. And Google proved it alongside blissfully ignorant commuters and other potential plaintiffs. It caused a huge uproar. But not like you think. Will Self-Driving Cars Have Road Rage? This week Google revealed designs for a prototype driverless car. 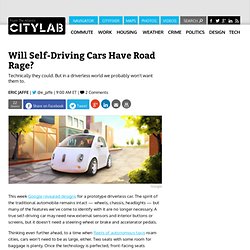 The spirit of the traditional automobile remains intact — wheels, chassis, headlights — but many of the features we've come to identify with it are no longer necessary. A true self-driving car may need new external sensors and interior buttons or screens, but it doesn't need a steering wheel or brake and accelerator pedals. Thinking even further ahead, to a time when fleets of autonomous taxis roam cities, cars won't need to be as large, either. Two seats with some room for baggage is plenty. Once the technology is perfected, front-facing seats themselves might even go away. So the form of cars as we know them (and, Alexis Madrigal suggests, perhaps the words we use to describe them) is bound to shift with autonomous vehicle technology. How Do You Make Roads Safer For Bikes? Nix Drivers. 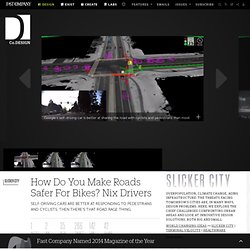 Although road design is a factor in encouraging higher speeds, the city's action plan for the program makes it clear that drivers are the problem: "Dangerous driver choices are the primary or contributing factor in 70% of pedestrian fatalities," the plan states.