Inside the Kremlin Troll Army Machine: Templates, Guidelines, and Paid Posts. Entrance of the Savushkina, 55 “troll army” headquarters in St. 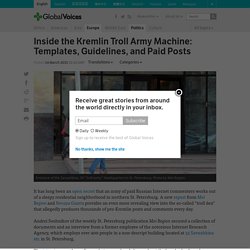 Petersburg. Photo by Moi Region. It has long been an open secret that an army of paid Russian Internet commenters works out of a sleepy residential neighborhood in northern St. Petersburg. A new report from Moi Region and Novaya Gazeta provides an even more revealing view into the so-called “troll den” that allegedly produces thousands of pro-Kremlin posts and comments every day. Andrei Soshnikov of the weekly St. The interview mostly confirms what many already know about the hundreds of employees who collectively manage thousand of social media accounts on LiveJournal, Twitter, and other platforms. A rare glimpse inside the “troll army headquarters” of Savushkina 55. Working as a paid commenter is not as easy as one might think, as the Internet Research Agency has strict and demanding guidelines for fabricated posts.

Leaked brief from February 28: News Analysis: Three Scenarios For A Succession In Russia. Would Prime Minister Dmitry Medvedev take over for an incapacitated Russian President Vladimir Putin, as outlined in the constitution. 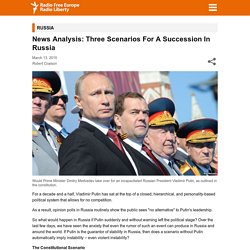 For a decade and a half, Vladimir Putin has sat at the top of a closed, hierarchical, and personality-based political system that allows for no competition. Putin describes secret operation to seize Crimea. Moscow (AFP) - President Vladimir Putin has revealed the moment he says he gave the secret order for Russia's annexation of Crimea and described how Russian troops were ready to fight to rescue Ukraine's deposed, pro-Moscow president. 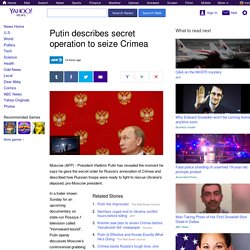 In a trailer shown Sunday for an upcoming documentary on state-run Rossiya-1 television called "Homeward bound", Putin openly discusses Moscow's controversial grabbing of Crimea a year ago. Putin recounts an all-night meeting with security services chiefs to discuss how to extricate deposed president Viktor Yanukovych, who had fled a pro-Western street revolt in the Ukrainian capital Kiev. "We ended at about seven in the morning," Putin says. "When we were parting, I said to my colleagues: we must start working on returning Crimea to Russia. " Four days after that February 2014 meeting, unidentified soldiers took over the local parliament in Crimea and deputies hurriedly voted in a new government. View gallery "He would have been killed," Putin said. The Coming Age of Special War. The last couple weeks have witnessed one of the most significant periods in decades in the annals of diplomatic history. 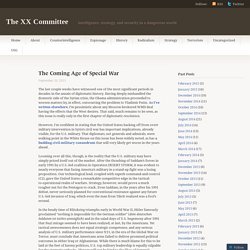 Having deeply mishandled the domestic side of the Syrian crisis, the Obama administration proceeded to worsen matters by, in effect, outsourcing the problem to Vladimir Putin. As I’ve written elsewhere, I’m pessimistic about any Moscow-brokered WMD deal having the effects that the West desires. That said, much remains to be seen, as this issue is really only in the first chapter of diplomatic resolution. However, I’m confident in stating that the United States backing off from overt military intervention in Syria’s civil war has important implications, already visible, for the U.S. military. That diplomats, not generals and admirals, were walking point in the White House on this issue has been widely noted, as has a budding civil-military conundrum that will very likely get worse in the years ahead. Above all, the U.S. is broke.

There are templates to follow. How Putin Is Reinventing Warfare. The Kremlin, according to Barack Obama, is stuck in the "old ways," trapped in Cold War or even 19th century mindsets. 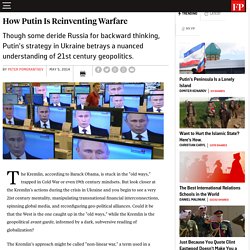 But look closer at the Kremlin’s actions during the crisis in Ukraine and you begin to see a very 21st century mentality, manipulating transnational financial interconnections, spinning global media, and reconfiguring geo-political alliances. The ‘Gerasimov Doctrine’ and Russian Non-Linear War. But what happens when the bear looks like a stray dog, or a cute little kitten? 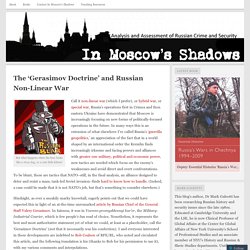 Call it non-linear war (which I prefer), or hybrid war, or special war, Russia’s operations first in Crimea and then eastern Ukraine have demonstrated that Moscow is increasingly focusing on new forms of politically-focused operations in the future. In many ways this is an extension of what elsewhere I’ve called Russia’s ‘guerrilla geopolitics,’ an appreciation of the fact that in a world shaped by an international order the Kremlin finds increasingly irksome and facing powers and alliances with greater raw military, political and economic power, new tactics are needed which focus on the enemy’s weaknesses and avoid direct and overt confrontations. To be blunt, these are tactics that NATO–still, in the final analysis, an alliance designed to deter and resist a mass, tank-led Soviet invasion–finds hard to know how to handle. Military-Industrial Kurier, February 27, 2013.

The new Russia, the new Ukraine, and Europe’s future. Putin Just Sent Nuclear Bombers Over the English Channel, Seriously. It’s no secret Russian President Vladimir Putin wants to turn back the clock to a time when the Soviet Union strutted on the world’s stage, the only superpower offering a true counterweight to the U.S. 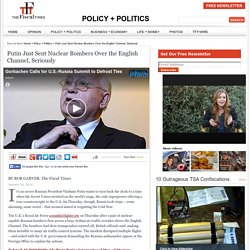 On Thursday, though, Russia took steps – some alarming, some weird – that seemed aimed at reigniting the Cold War. The U.K.’s Royal Air Force scrambled fighter jets on Thursday after a pair of nuclear-capable Russian bombers flew across a busy civilian air traffic corridor above the English Channel. The bombers had their transponders turned off, British officials said, making them invisible to many air traffic control systems. The incident disrupted multiple flights – and ended with the U.K. government demanding the Russian ambassador appear at the Foreign Office to explain the actions. Related: SLIDESHOW: Vladimir Putin: International Man of Mystery It’s possible that Thursday’s events were related to the European Union’s vote to extend economic sanctions against Russia for six months. 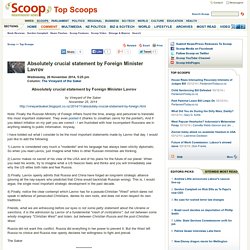 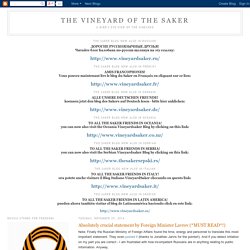 It is always a great pleasure for me to meet people and feel the intellectual potential, which enables the Council, its leaders and representatives to respond to global developments and analyse them. Russia and Ukraine: Information Warfare. The Current Situation The fighting in Ukraine has escalated sharply since the elections on May 25th. 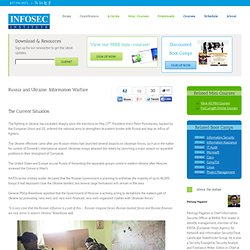 President-elect Petro Poroshenko, backed by the European Union and US, ordered the national army to strengthen its eastern border with Russia and stop an influx of fighters. The Ukraine offensive came after pro-Russian rebels had launched several assaults on Ukrainian forces, such as in the battle for control of Donetsk’s international airport. Ukrainian troops attacked the rebels by launching a major assault on separatist positions in their stronghold of Slovyansk. Can someone explain to me like I'm 18 what just happened with the Russian economy? : AskSocialScience. China media: Russia's rouble crisis. Paul Craig Roberts – Russia To Unleash Ultimate Black Swan Against The West. Today Dr. Paul Craig Roberts warned King World News that the Russians are going to unleash what he called the "ultimate black swan" against the West.

Dr. Roberts also discussed how a terrifying series of events would then bring the Western financial system to it knees as the banking system completely collapses. Dr.

Related:  What the Media Could be Doing More & More Of   -  Education   -  Enterprise