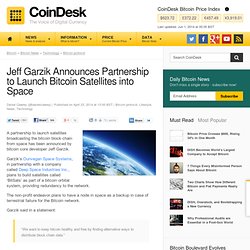 Garzik’s Dunvegan Space Systems, in partnership with a company called Deep Space Industries Inc., plans to build satellites called ‘BitSats’ as part of a bitcoin orbital system, providing redundancy to the network. The non-profit endeavor plans to have a node in space as a backup in case of terrestrial failure for the Bitcoin network. Garzik said in a statement: Urban Future (2.1)

Core Developer to Launch Bitcoin Node in Space. Bitcoin has already spread rapidly across the globe, but now one of the currency’s core developers wants to take it where no virtual currency has gone before – space. 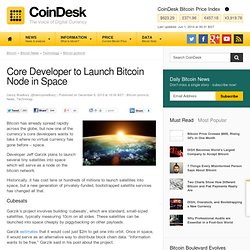