A 15-minute HIV and syphilis test — from your iPhone. (Courtesy of Tassaneewan Laksanasopin) Researchers at Columbia University have taken the mechanics of a laboratory test for HIV and syphilis and crammed them into a device the size of a wallet. 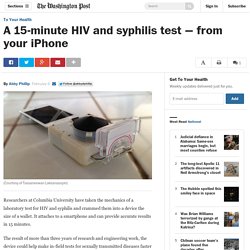 It attaches to a smartphone and can provide accurate results in 15 minutes. The result of more than three years of research and engineering work, the device could help make in-field tests for sexually transmitted diseases faster and more accurate in places where a second visit to a doctor for treatment isn't feasible. The device -- and others like it -- also could help make consumer technology an even more integral part of public health efforts. It works this way. The study was partly funded by the United States Agency for International Development with a focus on reducing transmission of sexually transmitted diseases from mother to child.

The process is similar to the one diabetics use to test their blood surgar levels at home. (Courtesy of Samiksha Nayak) The Future: QuantuMDx's Handheld DNA Lab. To refer our campaign to friends, family and even journalists & bloggers- remember to copy & paste your unique "Share This Campaign" URL above. 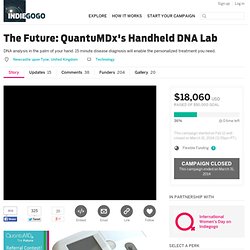 The Quantumite to share our campaign with the most people will be declared the winner! DNA analysis in the palm of your hand- this is The Future. Super-accurate diagnostics in under 15 minutes will mean you can immediately receive the personalized treatment you need. Cancer, flu, TB, STIs- our device will diagnose it. But first we want to put our Handheld DNA Lab to work tackling malaria, a disease which kills a child every minute. Want to design the world's first Handheld DNA Lab? Our cutting edge device has been featured in… Our Indiegogoal We have successfully carried out diagnostic tests using our innovative tech. Simple, user-friendly, accessible technology. Www.quantumdx.com. A Mobile Device That Diagnoses STDs On The Spot With A Simple Finger Prick. Samuel Sia, a biomedical engineering professor at Columbia University, has long been interested in making diagnostics more mobile. 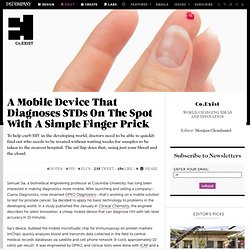 After launching and selling a company--Claros Diagnostics, now renamed OPKO Diagnostics--that’s working on a mobile solution to test for prostate cancer, Sia decided to apply his basic technology to problems in the developing world. In a study published this January in Clinical Chemistry, the engineer describes his latest innovation: a cheap mobile device that can diagnose HIV with lab-level accuracy in 15 minutes. Sia’s device, dubbed the mobile microfluidic chip for immunoassay on protein markers (mChip), quickly analyzes blood and transmits data collected in the field to central medical records databases via satellite and cell phone network (it costs approximately 10 cents per result). It was engineered by OPKO, and clinical tests were done with ICAP and a number of Rwandan collaborators.

A Mobile Device That Uses Your Blood Or Spit To Quickly Detect Disease. The $2.25 million Nokia Sensing XChallenge, a two-part X Prize competition to advance sensing technology that collects data about human health and the environment, has its first winner: Gene-RADAR, a product from the nanotechnology incubator Nanobiosym that accurately detects any disease with a genetic footprint using just a drop of blood or saliva. The entire diagnosis process only takes an hour, and there's no electricity, running water, or lab required. All of the finalists in the competition consisted of so-called "lab-on-a-chip" technologies--tiny devices that measure everything from heart rate to blood pressure to stress levels. "I particularly like the fact that you can connect these sensors to computing devices, which are close to everybody," says Henry Tirri, executive vice president and chief technology officer of Nokia (the chief sponsor of the competition).

Tirri believes these dedicated devices--and not sensors integrated directly into smartphones--are the future. A Handheld Device That Can Diagnose Diseases And Drug Resistance In 15 Minutes. The world of medical testing rarely provides instant gratification. 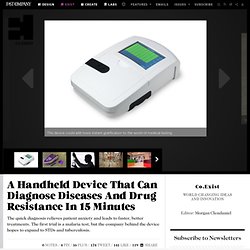 That has started to change as rapid diagnostic testing technologies advance, with products like the Gene-RADAR and the mChip, which can diagnose HIV with lab-level accuracy in 15 minutes. The latest advance on this front is the Q-POC, a handheld device that can diagnose infections and any potential drug resistance of the infection in 10 to 15 minutes. The founder of QuantuMDx Group, the company behind the Q-POC, had a genetic services company before launching this newest venture. "We were frustrated with the length of time it took to do diagnostics, and the costs. We could certainly see our patients spent three weeks worrying, and they should be getting results immediately," says co-founder and chief scientific officer Jonathan O'Halloran. When the six year-old company received seed funding from the South African government, the team moved to Capetown for two years.