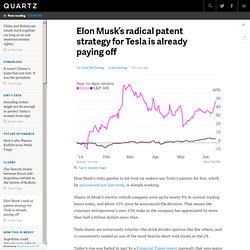 Shares in Musk’s electric vehicle company were up by nearly 9% in normal trading hours today, and about 10% since he announced the decision. That means the visionary entrepreneur’s own 23% stake in the company has appreciated by more than half a billion dollars since then. Tesla shares are notoriously volatile—the stock divides opinion like few others, and is consistently ranked as one of the most heavily short-sold stocks in the US. Today’s rise was fueled in part by a Financial Times report (paywall) that says major automakers Nissan and BMW are “keen on talks” with Tesla, to collaborate on charging networks and on “possible global vehicle-charging standards.”

The news that the Tesla will start deliveries of its Model X utility vehicles early next year has also helped. Musk Spreads the Tesla Effect—and Builds his Brand—with Open Playbook. There's no real doubt that Elon Musk is a visionary; he keeps opening new portals in business and elevating his game above competitors—but he is also raising the risks for himself and his enterprises if his continued bold choices take him down the wrong path. 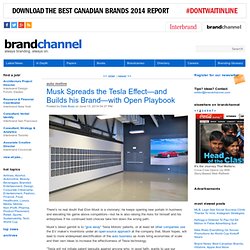 Musk’s latest gambit is to “give away” Tesla Motors’ patents, or at least let other companies use the EV maker’s inventions under an open-source approach at the company that, Musk hopes, will lead to more widespread electrification of the auto business as rivals bring economies of scale and their own ideas to increase the effectiveness of Tesla technology. “Tesla will not initiate patent lawsuits against anyone who, in good faith, wants to use our technology,” Musk wrote in a blog post. And the way he sees it, nothing less than the future of the planet may be at stake in this move. Elon Musk won’t sue you for using Tesla’s trade secrets - Quartz.

We told you there was a strong chance something like this was about to happen. 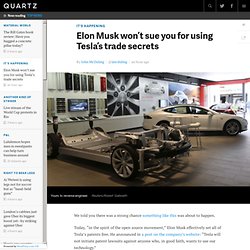 Today, “in the spirit of the open source movement,” Elon Musk effectively set all of Tesla’s patents free. He announced in a post on the company’s website: “Tesla will not initiate patent lawsuits against anyone who, in good faith, wants to use our technology.” And investors don’t seem thrilled. Tesla shares were up strongly before the announcement, but have since taken a hit and are now in negative territory. Musk, who has described the patent system as “farcical,” said Tesla only took out protections on its intellectual property for fear of being copied by big automakers.”The unfortunate reality is the opposite,” he wrote. So what will this mean in practical terms?

I have previously argued that such a move wouldn’t be purely altruistic. Still, Musk’s is a refreshing change in attitude from the bickering over intellectual property so common in the technology industry. Tesla Motors: Please infringe on our patents for the greater good. Patents no longer hang on the wall of Tesla Motors’ Palo Alto, Calif., headquarters. 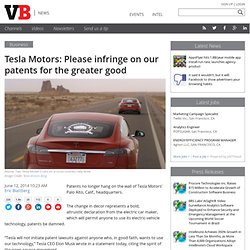 The change in decor represents a bold, altruistic declaration from the electric car maker, which will permit anyone to use its electric-vehicle technology, patents be damned. “Tesla will not initiate patent lawsuits against anyone who, in good faith, wants to use our technology,” Tesla CEO Elon Musk wrote in a statement today, citing the spirit of the open-source movement. Above: A Tesla Motors patent. “If we clear a path to the creation of compelling electric vehicles, but then lay intellectual property landmines behind us to inhibit others, we are acting in a manner contrary to that goal.” Musk hopes the move will encourage large automakers to invest more heavily in electric vehicles, which still represent what he says is “far less than 1 percent of their vehicle sales.”

What constitutes “good faith” use of Tesla patents remains unclear. Here is the announcement, in full. Tesla wants to kill gasoline by sharing its electric car technology with everyone. All Our Patent Are Belong To You. Yesterday, there was a wall of Tesla patents in the lobby of our Palo Alto headquarters. 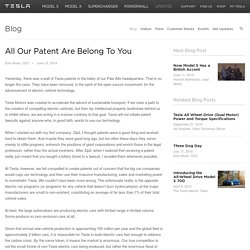 That is no longer the case. They have been removed, in the spirit of the open source movement, for the advancement of electric vehicle technology. Tesla Motors was created to accelerate the advent of sustainable transport. If we clear a path to the creation of compelling electric vehicles, but then lay intellectual property landmines behind us to inhibit others, we are acting in a manner contrary to that goal. 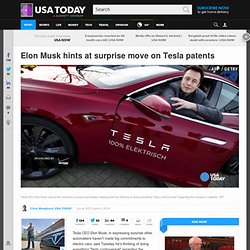 He didn't elaborate, but says it's a decision he would have to "carefully explain. " The surprising statement made at Tesla's shareholder meeting raised questions about whether he may be thinking of a particularly bold act, such as releasing some of Tesla's patented technology in order to foster further electric car development. CEO: Tesla's Elon Musk vows to stay on MUSK: Tesla CEO blames Ford for killing S-E-X Tesla, he said, sold 22,500 cars last year and is on target to sell 35,000 this year because of key advantages, including longer range per charge than its electric car competitors. No other automakers, he says, have taken electric cars as seriously.