Design Principles. A Periodic Table of Visualization Methods. A Golden Age of Design. Thanks to a convergence of creativity, technology and big money, the heyday of the field may finally be upon us. 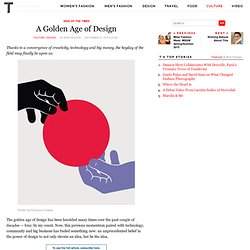 Photo The golden age of design has been heralded many times over the past couple of decades — four, by my count. Now, this previous momentum paired with technology, community and big business has fueled something new: an unprecedented belief in the power of design to not only elevate an idea, but be the idea. First, at the turn of the 21st century, it became a democratic affair. Everyday objects were made more beautiful and more readily accessible, and suddenly it was no longer acceptable for things to be unnecessarily unattractive. As the aughts advanced, it occurred to people that if design could make products work better, it might also be able to make the world work better. These days, engineering-centric Silicon Valley sees design as something that no longer just adds value, but actually creates it.

This design moment is also about a different marketplace — that of ideas. The Value of Design Research to Make Meaning in Society. Thursday, September 18th, 2014 | Posted by lauren.segapeli Over the past couple of weeks, our Design, Society and the Public Sector class has read five articles that discuss different methods of engaging users and the value that such engagement produces. 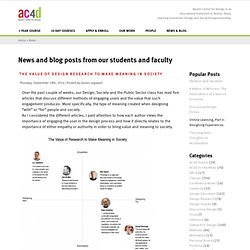 More specifically, the type of meaning created when designing “with” or “for” people and society. As I considered the different articles, I paid attention to how each author views the importance of engaging the user in the design process and how it directly relates to the importance of either empathy or authority in order to bring value and meaning to society. The Value of Co-Creation Liz Sanders’ article “A Social Vision for Value-Co-creation in Design” emphasizes the importance of Co-creation as a tool for driving significant social change.

“Co-creation puts tools for communication and creativity in the hands of the people who will benefit directly from the results.” The Value of Synthesis The Value of Uncertainty The Value of Context. Designs On- The Emerging Design Orthodoxy. I finally got around to watching IDEO CEO Tim Brown’s TED Talk “urging designers to think big”. 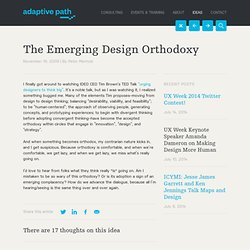 It’s a noble talk, but as I was watching it, I realized something bugged me. Many of the elements Tim proposes–moving from design to design thinking; balancing “desirability, viability, and feasibility”; to be “human-centered”; the approach of observing people, generating concepts, and prototyping experiences; to begin with divergent thinking before adopting convergent thinking–have become the accepted orthodoxy within circles that engage in “innovation”, “design”, and “strategy”. And when something becomes orthodox, my contrarian nature kicks in, and I get suspicious. Because orthodoxy is comfortable, and when we’re comfortable, we get lazy, and when we get lazy, we miss what’s really going on.

I’d love to hear from folks what they think really *is* going on. What’s the design process at GDS? Lots of people ask me what our design process is like at GDS. 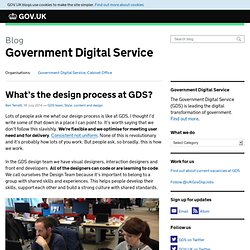 I thought I’d write some of that down in a place I can point to. It’s worth saying that we don’t follow this slavishly. SOLUTIONISM - A Design Documentary. Younghee Jung @ What Design Can Do 2012. Connecting - Trends in UI, Interaction, & Experience Design. For Creative Technologists, an Introductory Field Guide to Dealing with Big Brands in Partnership with an Ad Agency. Wieden+Kennedy is an advertising agency that solves brand challenges through all creative media, and code is an increasingly important part of the brand experiences we build. 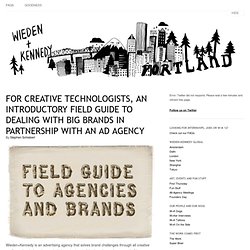 On October 19, 2012, Golan Levin gave a presentation at FITC’s Emerging Technology and Advertising event in Toronto titled New-Media Artists are the Unpaid R&D of Ad Agencies. It was a provocation meant to spur dialogue between advertising agencies and new-media artists. Since we work with new media artists (and employ a few) and some work we’ve done was mentioned, we wanted to contribute to the discussion, because misunderstandings on each side of the line between art and advertising have the potential to sour relationships that should be awesome.

Yes, awesome. As an agency, we like to make great work with the best talent. Field Guide to Agencies and Brands As a creative technologist, you may know that working for large brands comes with both opportunities and challenges. What Do Large Brands Worry About? Crediting. Design. 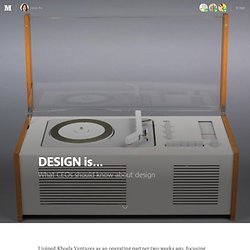 At the annual KV Summit this week, I had the opportunity to share my thoughts on design with the CEOs in our portfolio companies. DESIGN is as important as TECHNOLOGY Today, design is as important as technology. I was meeting with a startup last week when the principal architect asked me why is design more important now than ever before? The Problem with Solving Problems. If stupidity got us into this mess, then why can’t it get us out? 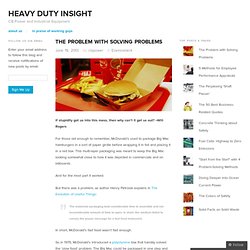 –Will Rogers For those old enough to remember, McDonald’s used to package Big Mac hamburgers in a sort of paper girdle before wrapping it in foil and placing it in a red box. This multi-layer packaging was meant to keep the Big Mac looking somewhat close to how it was depicted in commercials and on billboards. And for the most part it worked. But there was a problem, as author Henry Petroski explains in The Evolution of Useful Things: The elaborate packaging took considerable time to assemble and not inconsiderable amount of time to open. In short, McDonald’s fast food wasn’t fast enough. So in 1975, McDonald’s introduced a polystyrene box that handily solved the ‘slow food’ problem. The hungry consumer could also stuff their face in less time too, and with minimal ‘hassle’. The “clamshell” (the name it was known by) was a welcome innovation in the fast food industry. For one thing, polystyrene lasts forever. Anthony Casalena: The Process of Minimalism.