The real story behind Shell's climate change rhetoric. A man of Ben van Beurden’s power and reputation for blunt speaking is capable of silencing a ballroom packed with his boisterous peers. 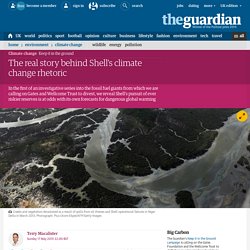 When the chief executive of Shell rose to address an industry gathering in a London hotel, a respectful hush descended. Van Beurden, 57, rose from a modest background in the Netherlands to the top of a cut-throat, politically fraught sector that rarely finds itself out of the public firing line. The annual black-tie dinner at International Petroleum Week in February, a typical nexus of senior executives and high-ranking government officials, was expecting a frank assessment of its response to its biggest challenge: global warming. Van Beurden did not disappoint. That speech was a far cry from the usual backslapping fare at the annual event and it put some noses out of joint.

Shell accused of strategy risking catastrophic climate change. Climate change is far from the only cause of a rapid rise disasters. A recent World Meteorological Organisation report described the frightening increase in weather and climate related disasters that occurred over the last four decades. 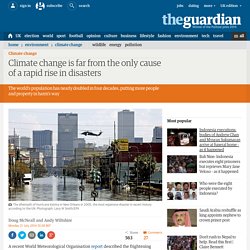 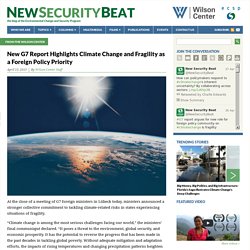 “Climate change is among the most serious challenges facing our world,” the ministers’ final communiqué declared. “It poses a threat to the environment, global security, and economic prosperity. River flooding to affect 40M people annually by 2030. WRI flood map for Indonesia 20.7 million people are affected by river flooding each year, and the number is expected to more than double by 2030 as population growth, urban expansion, and climate change will increasingly put people at risk. 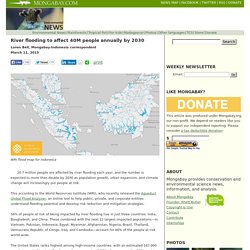 This according to the World Resources Institute (WRI), who recently released the Aqueduct Global Flood Analyzer, an online tool to help public, private, and corporate entities understand flooding potential and develop risk reduction and mitigation strategies. 56% of people at risk of being impacted by river flooding live in just three countries: India, Bangladesh, and China. 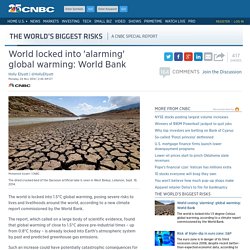 The report, which called on a large body of scientific evidence, found that global warming of close to 1.5°C above pre-industrial times – up from 0.8°C today – is already locked into Earth's atmospheric system by past and predicted greenhouse gas emissions. Such an increase could have potentially catastrophic consequences for mankind, causing the global sea level to rise more than 30 centimeters by 2100, droughts to become more severe and placing almost 90 percent of coral reefs at risk of extinction. Vanuatu's president blames climate change for extreme weather. The president of Vanuatu says climate change is contributing to more extreme weather conditions and cyclone seasons, after cyclone Pam ripped through the island nation. 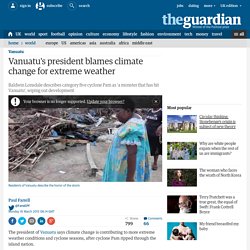 The damage from the category five storm to the island nation has been extensive, and is still being assessed as aid workers scrambled to get to affected areas on Monday morning. The official death toll remains at six, with many more injured, and is expected to rise as communication begins to be restored. Extreme Rain May Flood 54 Million People by 2030. River flooding could affect 54 million people worldwide in 2030 as more extreme rainfall and the rapid expansion of cities double exposure to inundation, according to a new analysis. 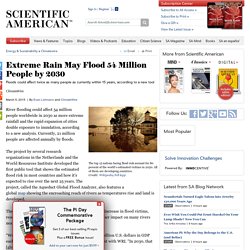 Currently, 21 million people are affected annually by floods. The project by several research organizations in the Netherlands and the World Resources Institute developed the first public tool that shows the estimated flood risk in most countries and how it's expected to rise over the next 25 years. The project, called the Aqueduct Global Flood Analyzer, also features a global map showing the encroaching reach of rivers as temperatures rise and land is developed. The economic impacts are growing even faster than the increase in flood victims, researchers say. And sea-level rise—which makes a further impact on many rivers near the coast—will be factored into a later study. Rapidly Rising Sea Levels To Endanger NYC By 2050, So Say Goodbye To Queens - NYU Local. Imagine for a moment that it’s 2050. 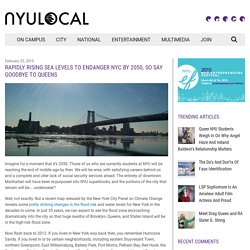 Those of us who are currently students at NYU will be reaching the end of middle age by then. We will be wise, with satisfying careers behind us and a complete and utter lack of social security services ahead. The entirety of downtown Manhattan will have been re-purposed into NYU superblocks, and the portions of the city that remain will be….underwater? Well, not exactly. But a recent map released by the New York City Panel on Climate Change reveals some pretty striking changes in the flood risk and water levels for New York in the decades to come. Credit ratings agencies just realized that climate change is a threat to the world economy - Quartz. Credit rating agencies have been accused of being asleep at the wheel during the US subprime mortgage crisis, which ended up morphing into a full-blown international financial crisis and triggering a global recession. 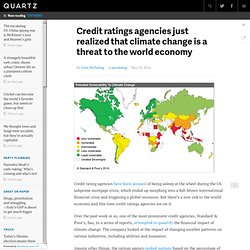 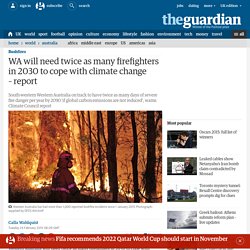 The Heat Is On report, released on Tuesday, said south-western WA, one of the most fire-prone areas in the world, was on track to have twice as many days of severe fire danger per year by 2090, “if global carbon emissions are not reduced”. “To stabilise the climate and eventually halt the rising trend of extreme heat, carbon emissions need to be cut rapidly and deeply,” the report said. The New Normal of Extreme Weather Conditions. Disruptive forces created by climate change represent the “new normal” for the real estate industry and cities worldwide, posing “huge risks” to those not adequately preparing for it, warned a panel of experts at the ULI Europe Annual Conference in Paris last week. “Whether you’re an owner, occupier, investor, insurer, or running a city, it affects you. Extreme weather is a topic that goes right across the board, although it is not on the radar of many people,” said Dame Judith Mayhew Jonas, former chairman, London & Partners.

Many of these cities are in disaster-prone coastal areas, river deltas and floodplains. Now BP and Shell will consider the cost of climate change when doing business. BP will support a shareholder resolution calling on the company to release information about how climate change could affect its business. It’s the second big win for climate-conscious investors this year: Shell agreed to support a similar resolution last week. Both the Shell and BP resolutions were submitted by a coalition of activist investor groups representing more than 150 major shareholders in Europe and America, including the U.K.’s Environment Agency and the Church of England, for a combined $300 billion in assets.

The resolution asked Shell and BP to reduce emissions, to invest in renewables, to provide transparency about bonuses that reward “climate-harming activities,” and to test how their business models would hold up if governments were to take action to limit global warming to 2 degrees Celsius. Study: Global warming 'doubles risk' of extreme weather. 26 January 2015Last updated at 12:11 ET By Helen Briggs Environment correspondent, BBC News Extreme weather in 1998 was linked with La Nina. Beetles and Climate Change Helped Create This Huge Wildfire in Alaska.